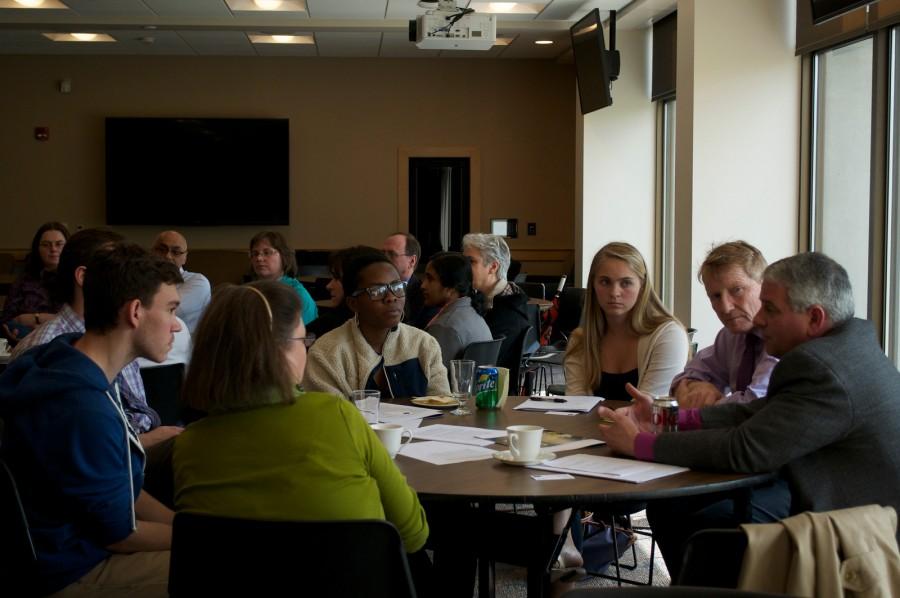 Over 50 students, faculty, and staff gathered in Walls Lounge on April 22 for the inaugural open forum hosted by the President’s Diversity Council. Many of the attendees were members of the Council, which consists of thirteen members of staff or faculty whose positions on campus range from president to dean to professor to administration, although there were many students and some alumni in attendance over the course of the two and a half hour drop-in session.

The Council was established in 2012 by President John Bravman, which, by his words, “has been very helpful in dealing with some of the horrible events on campus this past spring,” in reference to the racist and violent remarks made on a WVBU radio show in late March.

The forum was in the form a round-table discussion where attendees floated between tables and conversations flowed freely without strict direction. Among topics discussed at the forum were issues of social stratification on campus due to race, class, Greek affiliation, gender, sexual orientation, and ethnicity. The forum was organized by Associate Provost for Diversity Bridget Newell as part of an increased effort to get feedback from members of the campus community about efforts to diversify.

While this is the first time that the has Council opened its discussions up to the public, there are plans to expand, adding both a Faculty and Staff “Diversity Action Team” as well as a Student Diversity Council to the mix. This will serve to redirect the President’s Diversity Council with “a focus on better connection/collaboration with faculty, staff, and students,” according to literature distributed at the forum highlighting the various ways in which diversity on campus has been addressed and will continue to be addressed in the future in accordance with the 2014-2019 Diversity Plan.

One topic of discussion was the diversification of the student body and what the implications of this will be on campus. This past admissions pool for the class of 2019 has yielded 29 percent students of color, in comparison to the class of 2018’s 21 percent. While the exact numbers won’t be determined for the official class of 2019 for a few more weeks, Bravman and Dean of the College of Arts and Sciences George Shields agreed that these numbers show a positive trend in diversification of the student body.

Another commitment that the President’s Diversity Council has focused on is the diversification of faculty and staff, although Bravman was quick to point out that “increasing numbers alone is no magic solution; however, it will improve the climate on campus. Numbers will be a part of the solution.”

Several curriculum changes are in early talks at this point, according to Shields, although they cannot be realistically implemented until fall 2016, but are “very likely to happen.”

Amarachi Ekekwe ’18, who spoke at the April 14 Solidarity Ceremony and revealed the underrated importance of simply saying hello when passing people around campus, was able to engage Chief of Public Safety Steve Barilar in a discussion about campus safety for minority students.

“Diversifying my staff is my number one priority. I am desperately trying to work on that, because I know how important it is. Our entire office is white, middle-class [officers], and I know that that needs to change,” Barilar said.

Another topic of discussion was the stratifying effects of Greek life on campus, which sometimes serve to further marginalize students who might already be a part of a minority group. While it seems overwhelmingly as though Greek life is here to stay for the time being, many students and faculty expressed concern over the classist undertones of the systems in place that do not lend themselves to an inclusive environment.

“[Minority groups] belong here too—we did as much to get onto this campus as you did. You have to acknowledge us,” Ekekwe said.

Newell was pleased with the strong showing of many members of the campus community, and the fact that there never seemed to be a lull in the conversations across the many tables that were filled.

“I think it’s exciting and important that we have the opportunity to see the campus community’s desire to listen and be heard by one another,” Newell said.