Staff of the Year 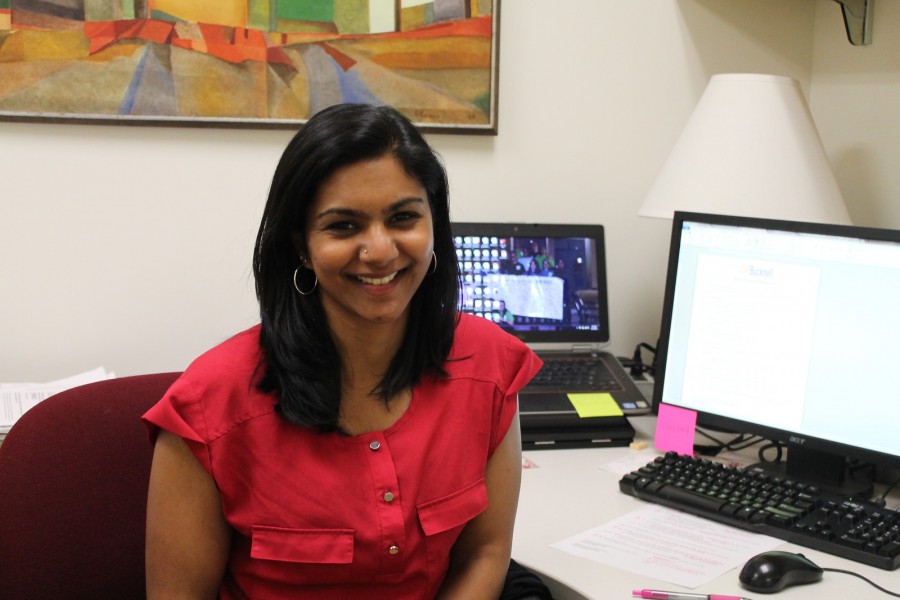 “As your eyes open up to these issues, they become a part of your brain that you can’t turn off,” the University’s Interpersonal Violence Prevention Coordinator Padma Ravichandran said. “Promoting awareness of sexual violence has been something I’ve grown to be extremely passionate about.”

In her short time at the University, Ravichandran has stepped into her role not only as coordinator, but also as a role model, a women’s leader, an organizer, and a mentor, among many other things. She oversees most of the sexual violence prevention efforts on campus and works closely with the Women’s Resource Center.

Most students on campus will recognize Ravichandran as the facilitator for Speak UP Bucknell, which is a peer education group composed solely of student volunteers who work to prevent sexual violence by emphasizing the positive bystander role. Some might think of her only as “the Speak UP lady,” but Ravichandran admits that she sees no problem with the association, saying Speak UP is “the highlight of my job.”

Her tangible passion comes from a diverse public health background. She received her undergraduate Bachelor of Science degree in Community Health from the University of Maryland and studied in graduate school at Emory University, where she received her Master of Public Health degree.

Surprisingly, Ravichandran did not have much exposure to sexual violence prevention during her undergraduate years, even though her personal interests have always aligned with sexual prevention work.

“I’ve always been independent and interested in women’s rights, but I think doing this work in sexual violence prevention has fostered my interest even more,” Ravichandran said.

It was at the end of her graduate school experience when she began this line of work. Post-graduate, she took an interim position at the Georgia Institute of Technology working as a sexual violence prevention educator and saw the opportunity for the program here at the University.

“I came [here] to interview and I really enjoyed the community. It seemed like a great opportunity, as an entry-level job, for someone, like me, who is pretty new in my career. I’ve certainly had a great experience,” Ravichandran said, referring to her hiring process at the University.

Ravichandran has worked closely, with students specifically, to help further accomplish the University’s mission of protecting and serving. This year, in particular, she has made incredible strides, including piloting a Sorority Ally Training program in the fall (in addition to expanding the Fraternity Ally Training program), organizing the NO MORE campaign, training peer educators, and working more actively with first-years.

“The progress we’ve made on Bucknell’s campus regarding sexual violence has been exciting, so I know that it’s possible, but we need to continue to be committed to it. It takes a continued effort and it’s not something that happens overnight,” Ravichandran said.

In terms of the University’s current campus climate, “You have to look at where the gaps are,” Ravichandran said.

One major gap before last year was the amount of first-years involved in awareness efforts.

“I wanted to increase those numbers even more with Speak UP follow ups, and we certainly did that,” Ravichandran said.

This year, another one of Ravichandran’s goals was to engage more upperclassmen. The Fraternity Ally program piloted in the spring of 2014, and this past fall, the Sorority Ally program was piloted.

The training program “uses the existing structure on campus to build groups of students who are more knowledgeable and skilled to be positive bystanders and help the peer educators and the community address sexual assault on campus,” Ravichandran said.

These groups, as an extension, can accomplish this more so than what peer educators themselves can do. From what she has gathered, Ravichandran understands that the training program, from the student perspective, has been “a super unique opportunity to see progress, specifically in how these men and women are consuming information and applying it in their chapters.”

One more powerful extension of Speak UP, and of Ravichandran’s innovation herself, is the NO MORE campaign, an example of passive sexual violence awareness programming at the University. Panhellenic Council and the Women’s Resource Center brought the “NO MORE” campaign to campus in the fall of 2013, so it was just “a natural progression” to expand the campaign. The passive programming is to have reminders of “what we’re promoting throughout the year in between events,” Ravichandran said.

The NO MORE posters initially started with a slew of blank faces, to mirror more of the national efforts and what organizations like the NFL were doing, and Ravichandran thought that that same message could be shaped around the University’s campus.

“We started by taking pictures of the peer educators because we knew they would be comfortable with their faces around campus, and then we incorporated others too,” Ravichandran said.

Awareness about sexual assault on campus seems to be on an upward trend thanks to many of the aforementioned efforts. Ravichandran pointed out some of the positive strides that have been made in the campus community as a result of these efforts.

“We have been ahead of the curve with our efforts in promoting this awareness and that has been wonderful to see; to know that we’re a university that is taking these issues seriously,” Ravichandran said.

Ravichandran’s legacy, unfortunately, will have to transition to different hands. She has accepted a position at Columbia University next fall. Still, Ravichandran was eager to speak about the future of the University’s campus climate in regards to sexual violence.

“I want to engage more underrepresented students: international students, LGBTQ groups, non-Greek men and women, etc. on campus because they are equally a part of this community and we should be engaging them,” Ravichandran said. Faculty opportunities too are “endless,” she said.

Building new partnerships for the likes of Speak UP and sexual violence prevention is up and coming for Ravichandran. This year, Speak UP partnered with the Outing Club, and she says that she hopes to continue thinking of new and creative ways to tie in the issue of sexual assault and dating violence.

Ravichandran has strongly and fearlessly established a presence for herself and her organization by promoting sexual violence awareness on the University campus, and many, including her peer educators, have echoed assertions of her hard work.

“Being welcomed into Speak UP would not have been the same without Padma,” Emily Sprague ’17 said. “Throughout all our training sessions, committee meetings, and group discussions, Padma approaches every aspect of Speak UP with an open attitude and a drive to make the Bucknell community a safer space. Even though she is essentially my boss, Padma has always treated me with respect and expects that each Peer reciprocate. That being said, Padma has been a wonderful addition to the Bucknell community and she will truly be missed.”

Ravichandran did offer some parting advice, particularly for the young women on campus.

“Women need to support each other,” Ravichandran said. “Some of the things I’ve heard and seen on campus regarding the reporting of sexual assault are not supportive. Women need to be good friends and support the survivor by helping them through the difficult time.”

She believes that true, sheer support is crucial for forward progress.

“That support is so powerful. At the end of the day, we want students to come forward and hold perpetrators accountable. Having a support system is really important.”