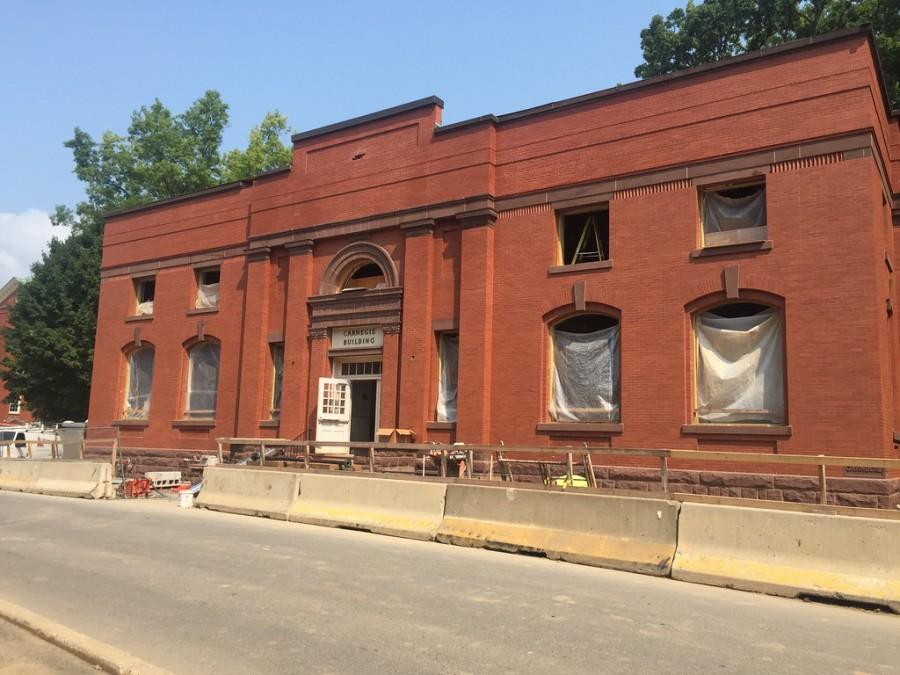 Since the recent completion of the South Campus Apartments and Commons Building, students have been buzzing about what other campus reconstruction projects are next up on the agenda. With a quick glance around campus, they may discover that many are actually underway.

In addition to the reconstruction of the Carnegie Building, the new Graham Building is currently being built from the ground up. Moreover, the renovations of Roberts Hall will begin this coming spring semester.

The revampment of the Carnegie Building, a project expected to be completed by January 2016, is a $7 million  project geared towards restoring some of its original appeal, in becoming a more comfortable space for students to relax or study in. Part of the renovations include a skylit atrium, a feature of the building visible when it first opened but covered up some years later.

The Graham Building is also in the works, and will be located on the eastside of Sojka Pavilion. Scheduled for a completion date in spring 2016, the Graham Building will serve as the new home of  Student Health, the Counseling & Student Development Center, and the Graham Wrestling Center. The wrestling center in particular will have new locker rooms and practice areas along with a number of other student-centered spaces designated for both academic support and athletic training.

Director of Housing Services Stephen Apanel said that an important objective in reconstructing Roberts Hall is to restore the idea of “true student residence buildings.”

The renovation of Roberts Hall, a task aimed at making the building a safer and more comfortable place, will begin this December and conclude in August 2016. The layout of the new rooms will have a semi-suite style, almost resembling a split double. Not only will all of the rooms be air-conditioned, but every hall will have access to a kitchen, and a new lounge space will be situated at the building’s entrance.

“I am excited to see what the new construction brings to campus next year. Although I love Roberts Hall location-wise, a lot of the amenities are extremely outdated,” Melody Sonnemann ’18, a resident of Roberts, said.
Many of the other campus dorms have common rooms, up to as many as one on each floor, and group meeting spaces, while Roberts has very few public rooms, and equally outdated furniture.
“My biggest concern is how Housing Services will handle moving out its second-semester residents. I feel like it will be hard with the whole Trax, Kress, and Roberts quad in a more permanent phase of heavy construction,” Sonnemann said.

Chief Communications Officer Andy Hirsch assured that once complete, Carnegie and Roberts will be in compliance with the rules of the Americans with Disabilities Act (ADA); both buildings will have elevators and handicap-accessible restrooms.

Apanel said that Harris and Larison Hall are next in line for renovations, although a start date for either has yet to be set. Additionally, Hirsch said that the University is in the planning phases of constructing a new academic building, Academic East. It will be built across from Academic West and will house new lab, office, and classroom space.

“We are making significant investments in these and other construction projects because we know how important our facilities are to delivering an excellent residential education experience to our students,” Hirsch said.

While the construction scattered across campus this and next semester may seem an inconvenience to some, Apanel guarantees that it’s all for the best.

“If you don’t see construction happening around on campus, that campus probably is not making any progress,” Apanel said.