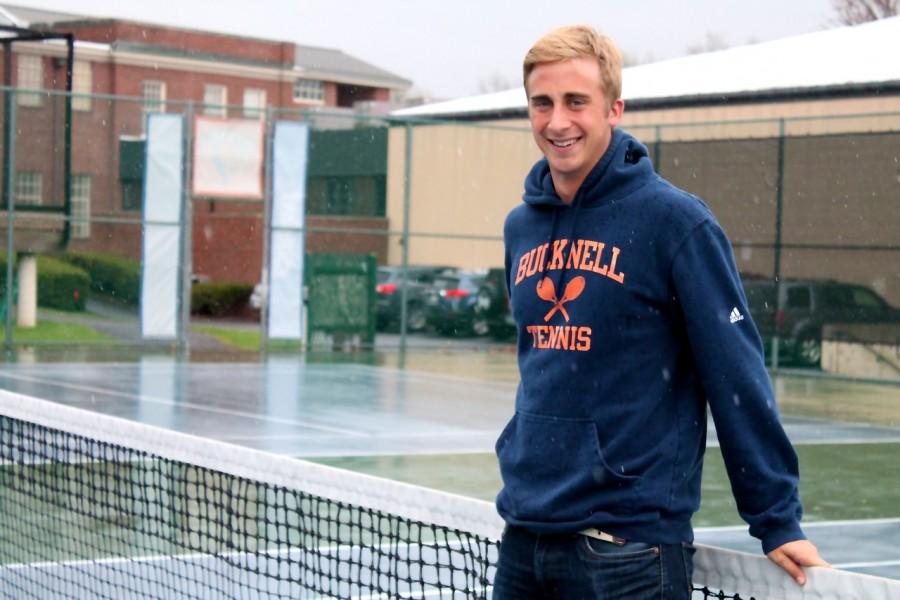 Success is nothing new for tennis standout Nick Bybel ’16. The two-time Patriot League Player of the Year has a collection of accolades to his name, highlighting his astounding accomplishments on the tennis court over the past three years as a Bison. Bybel’s record-setting weekend at the Bison Invite Sept. 25-26 landed him a new title that few have had the chance to hold: the program total career wins record.

The senior captain now has a career record of 156-52, the most in program history, yet he intends to leave a mark on the sport much further than just in Lewisburg.

“It feels good to hold the career victories but it doesn’t stop there for me. I want to keep pushing and leave my mark not just at Bucknell but on the Patriot League Conference as well,” Bybel said.

Bybel is in excellent standing to do just that, as he has received numerous recognitions from the conference in both singles and doubles play throughout the years. As a sophomore, he became the program’s first Patriot League Player of the Year after finishing 26-9 in singles play and 16-12 in doubles play. As a junior, he was handed the title for a second consecutive year, as well as the honor of Patriot League Doubles Team of the Year alongside teammate Bryan Adams ’17. Bybel closed the season with 21 straight wins, as he concluded the year with a record of 38-3 in singles and 28-5 overall in doubles. Before beginning his senior debut, Bybel was ranked 95th in the first edition of the Oracle/ITA Collegiate Men’s Tennis Division I rankings.

The individual nature of the sport can often overshadow team dynamic, yet Bybel places a massive emphasis on the motivation and drive that result from playing for those wearing the same jersey beside him. Despite his personal success, Bybel recognizes the impact that his team and coaches have had in helping to shape and guide him as a player.

The Orange and Blue performed extremely well collectively on Sept. 25-26 at the Bison Invite. No Bison player lost a match to a non-Bison opponent during the tournament, and the team ended the weekend with a 21-0 record against Lafayette, Niagara, and Saint Francis opponents.

Bybel attributes both individual and team success to a “buy-in” of the system. To him, buying in means putting in extra work everyday to make sure that he is the best prepared for each match and so is the team. Through this dedication and preparation, Bybel hopes to win the conference as a team and qualify for the NCAA tournament. In order to achieve these aspirations, Bybel knows that the entire team must buy in to the system that their coaches have put in place.

“The coaches have the team’s best interest in mind with everything they do. Some of the early morning practices start to get to you, or doing extra conditioning for someone else’s mistake, but these are what build character and what turns your team into a family,” Bybel said.

It is the successful team dynamic such as this that Bybel hopes will create both a championship team and a senior season that will surpass any of his expectations. His next stop is in Tulsa, Okla. here he will compete in the ITA Championships on Oct. 3 before returning to play with the entire Bison squad on Oct. 9-11 at the Farnsworth Invite hosted by Princeton.