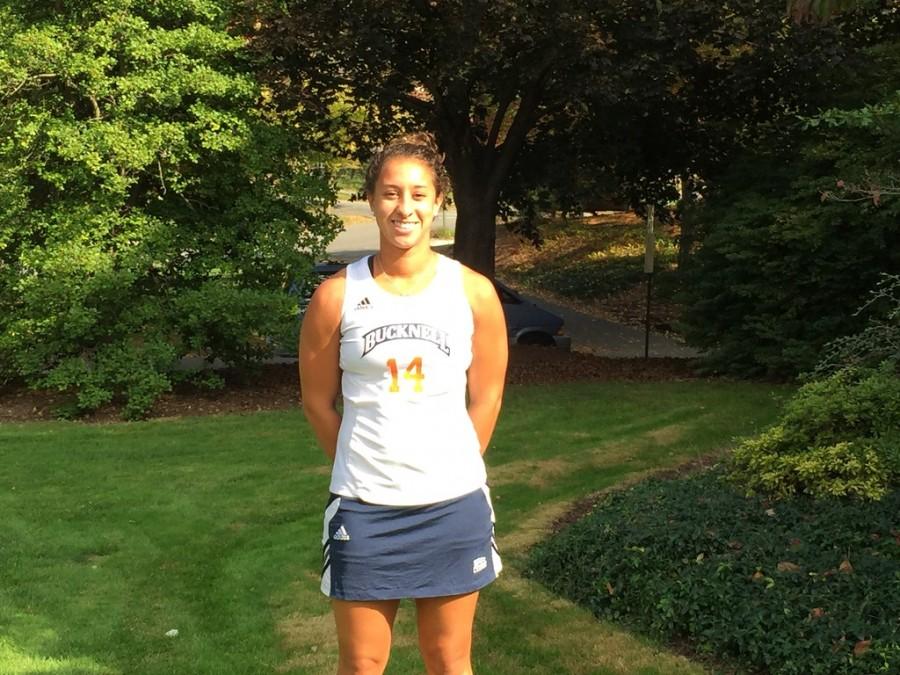 After tallying four goals in three games for the women’s field hockey team, Kiersten Sydnor ’16 led the Orange and Blue to two essential victories on Oct. 3-4, elevating the team’s conference record to 2-0. The team matched up against Lock Haven, Colgate, and St. Joseph’s for three exciting games and two home wins.

“This weekend’s wins were a huge confidence boost for our team that was much needed, especially in terms of goal scoring,” Sydnor said.

Despite a 2-1 loss to Lock Haven midweek, the team rebounded with wins against two tough opponents that Sydnor hopes will prepare them for a difficult test against an aggressive Lafayette opponent on Oct. 10.

Sydnor tallied three goals and one assist in two games at home, boosting the Orange and Blue’s straight league wins record to eight and their unbeaten home stint to three games. She also earned the lone goal for the Bison in a tough match-up against Lock Haven on the road.

“This week we focused on having five-minute power shifts where we would have periods of five minutes of explosiveness on the front end. Having this five-minute mentality allowed us to have better focus, and everyone was working together to get something out of each play,” Sydnor said.

This explosive mentality was reflected in the high-scoring nature of the games, as the Bison tallied 11 goals in the three match-ups, and allowed only four against. Sydnor hopes the strong display of offensive effort will continue into the rest of Patriot League play.

“This weekend against Lafayette will be a test to see if we can be an aggressive and competitive team for the entire 70 minutes,” Sydnor said.

Sydnor has played every game with a determined mindset after setting personal goals to give it her all at every practice and every game, recognizing how quickly the season will come to a close. She has made a commitment to herself and her teammates to give her best possible effort every day in order to win a Patriot League Championship come November.

“As a senior class, we want to show the younger girls that these four years will fly by, so it is important to appreciate what you have and go your hardest every day because one day there won’t be a ‘next season,’” Sydnor said.

Sydnor’s personal goals have altered over the years from simply securing playing time to now setting her sights on a Patriot League trophy. She has made an impact all four years as a crucial offensive force for the Bison, but for the rest of her senior campaign, she hopes to make an even bigger impact. She emphasizes that her personal impact is only important if it can translate to team success.

“As I’ve grown, I’ve realized the team’s success is much more important to me than my own statistics,” Sydnor said.

Sydnor may be recognized as a team goal scorer, but she notes the importance of every girl on the field. As one member of a strong senior class, Sydnor hopes to leave a mark on the program by securing that championship ring and showing what work ethic and heart can achieve.

Sydnor hopes to help with securing two pivotal victories for the Bison at Lafayette and Temple on Oct. 10-11.