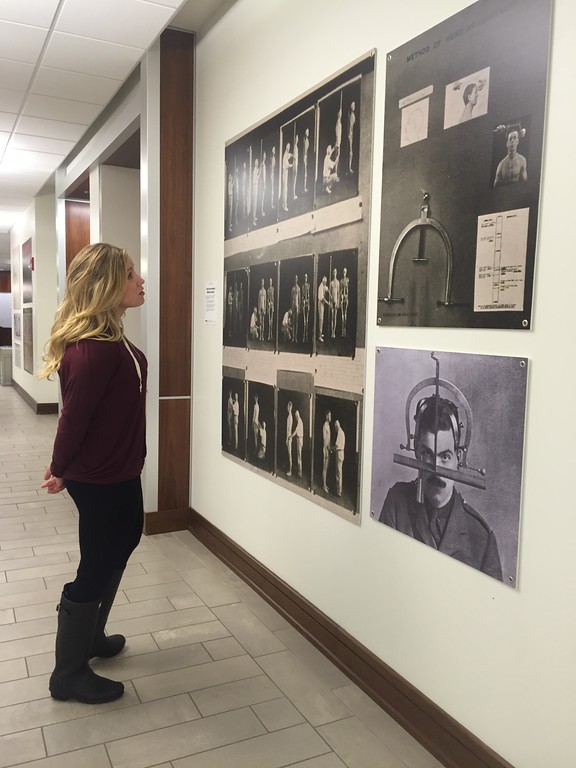 Step into the Samek Art Museum and experience the exhibition “Haunted Files: The Eugenics Record Office.” Sift through reproductions of documents in a setting reminiscent of the 1920s American eugenics office, part of the Connections Gallery.

The Connections Gallery is a community-curated space that allows anyone to request an exhibition from the Samek Art Museum, time permitting. The outside partner for the “Haunted Files” exhibit was Professor of Geography Paul Susman, who brought the exhibit to the Samek Art Museum on loan after seeing it on display at New York University (NYU).

The exhibition recreates the original American eugenic office in Long Island, N.Y. From 1910-1939, the office conducted pseudo-scientific research, measuring everything from head and body size to intellectual ability, in order to create a superior human race. The reproduction of “inferior” people, such as those considered to have low mental ability or a criminal tendency, and those who were non-Protestant or non-white, were eliminated. Eugenicists also sought desirable traits by advocating for selective breeding.

“For me, it’s fascinating. The Eugenics department was a large undertaking for the United States, yet we never learn about it, simply because of its abject nature. Being able to go through the files really brings this part of history to life and allows students and other visitors to experience art and history in a new way,” Kasey Bailey ’16, an art major, said.

Bailey also emphasized the power of art in provoking a response in people, whether it’s fascination, disgust, or even ambivalence.

The exhibit is not limited to the Samek Art Museum. Posters also hang in the ground floor of Academic West. There, the exhibit pieces are displayed unconventionally by not being framed. This has garnered some negative feedback, as it is not immediately clear that the posters are meant as a critique, rather than an endorsement, of eugenics.

Emily Malmquist ’18 was initially confused at the ambiguous way in which the posters were displayed, given their controversial nature.

“But after taking a closer look, I realized this is part of what makes them so successful,” Malmquist said.

Samek’s Public Programs & Outreach Manager Greg Stuart said that the unique display of the posters contributes to their effectiveness.

Stuart said that the exhibition is “a reminder that many of the issues raised by the exhibition–especially around race and anti-immigration policy–are still with us today. These reminders are especially important at Bucknell in confronting issues of prejudice (racial and otherwise) on campus.”

Learn more about these issues by attending a talk by Professor Jack Tchen of NYU, one of the exhibit’s curators, on Nov. 17 at 7 p.m. in the University’s Gallery Theatre entitled, “Haunting the American Dream: Eugenics, Meritocracy, Spatial Sorting & the Origins of Our Present Crisis.” The exhibition will be on  display until Nov. 29.