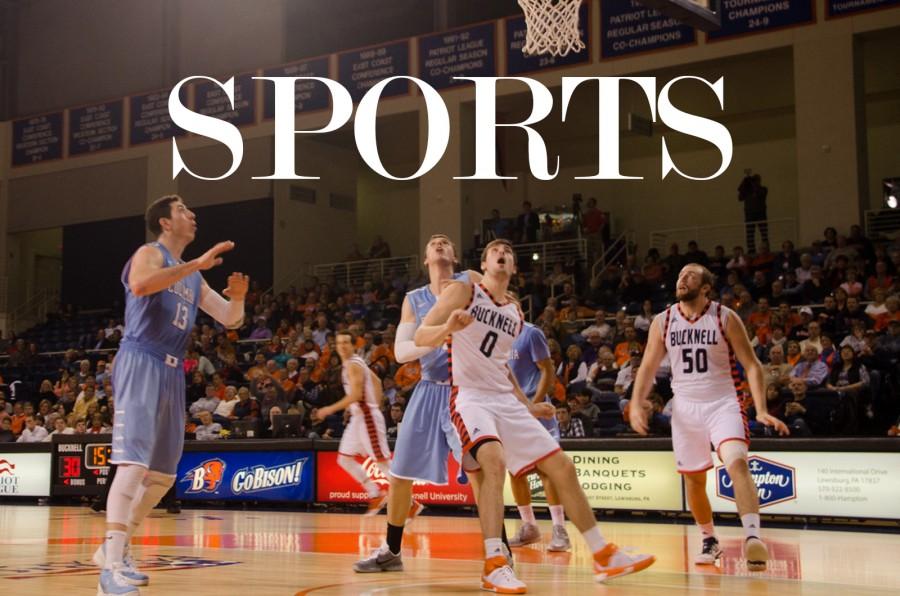 On Nov. 28 the men’s basketball team traveled to Happy Valley to take on the Penn State Nittany Lions. In the seemingly annual November match-up between opponents separated only by 55 miles, Penn State won 62-58. The Orange and Blue have dropped their last two contests against the Blue and White, with their last win in the series coming in 2013.

Coach Nathan Davis’ team was held to 29.8 percent shooting in their first loss away from home this season. The team’s percentage from the field plummeted in the waning minutes of a game they thought to have nearly wrapped up, as they were knocked off by a 13-1 Nittany Lion run to close the game. The Bison were unable to get a field goal to drop in the final five and a half minutes of play, with their last bucket, coming from Chris Hass ’16, giving them a 57-49 lead. From there, it was all Penn State at the end of the second half, dropping the Bison to 3-3 on the year.

The 57-49 lead blown by the Blue and Orange was the largest of the game for either team. A back and forth game from the opening tip saw the Orange and Blue down just one at the half, as a 34-second offensive burst slimmed a 30-25 margin down to 30-29. A pair of Hass free throws contributed to this scoring, and the first half buzzer was beaten a second later after a Dom Hoffman ’16 tip in. Hass had an inefficient game by his standards, but he did manage to rack up 18 points. In the opening 20 minutes of action, Zach Thomas ’18 was second amongst all scorers in the game with nine points. He finished the day with 14 points on 4-9 shooting, with all of his makes coming in the first half. Thomas was only able to add to his scoring totals from the charity stripe in the second half, sinking five of his six free throw attempts in the game.

The Bison were outscored 28-22 in the paint against their second Power Five conference opponent of the year. One reason for this may have been Nana Foulland ’18 only seeing 27 minutes on the floor. He was able to tally eight points on two of nine shootings and nine rebounds. Eight of Foulland’s boards came on the defensive end, but his teammates also helped on the glass, as both teams pulled down 38 rebounds on the day. Kimbal Mackenzie ’19 ran into some of the most prominent struggles of his young college career, as he could only manage two rebounds and one assist in limited minutes. Stephen Brown ’18 led the Bison in assists, dishing out five of the team’s eight.

The Bison then returned home for a matchup with Columbia, losing 72-61. Hass scored his 1000th point for the Bison in the game, becoming the 39th player in program history to do so. The Orange and Blue will head to Raleigh, N.C. to play North Carolina State on Dec. 5 for their next game.