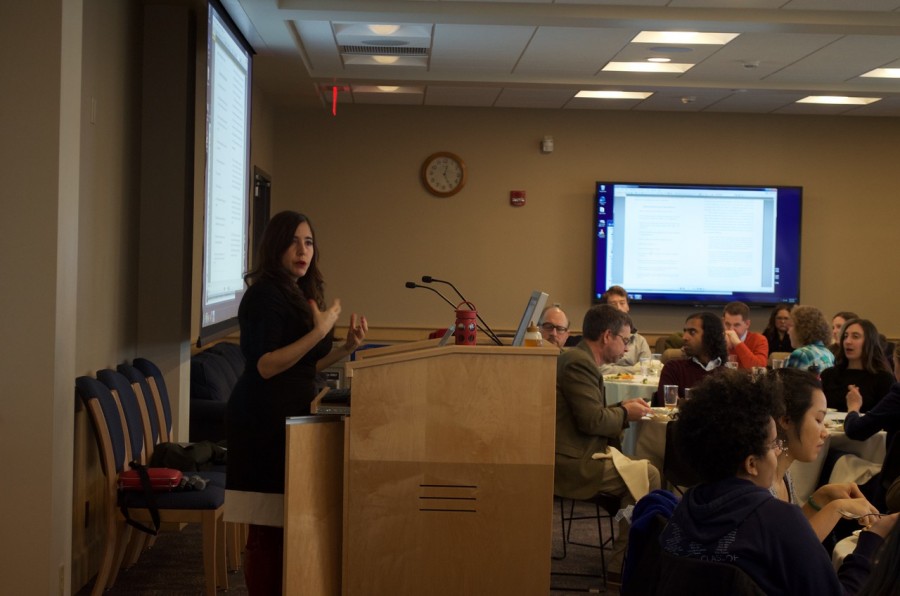 On Jan. 22, notable media critic Jennifer L. Pozner delivered a thought-provoking lecture entitled “How Media Instigate Gun Violence and Rape Culture.” This event wrapped up the University’s week-long celebration of Martin Luther King, Jr. and was sponsored by the department of women’s and gender studies.

Inspired by Martin Luther King, Jr.’s enduring legacy, Pozner continued the important conversation about violence and discrimination, highlighting that the problems that Dr. King sought to resolve still pervade in our present-day society. Her presentation exposed how the media perpetuates race and gender-based violence.

Pozner is the founder of “Women in Media & News” and the author of “Reality Bites Back: The Troubling Truth About Guilty Pleasure TV.” She has made it her career-long endeavor to change the way media presents the public with information.

“Through the use of a multi-media presentation, including written and visual news media, popular TV shows and movies, as well as social scientific research results, Pozner demonstrated that what appear to be truths about perpetration and victimization instead frequently reflect (and therefore also perpetuate) sexist, racist and heterosexist biases,” Women’s and Gender Studies Department Chair Coralynn Davis said.

“Pozner’s presentation challenged the misrepresentations and underrepresentation of marginalized groups in the media, and provided listeners tools to engage with media more deliberately and consciously. Her discussions of gun violence and rape culture illuminated cultural injustices that are rarely critically analyzed in mainstream discussions of these issues,” Lindsey Ruff ’16 said.

“I believe we need media literacy now more than ever,” Pozner said, pointing out how the majority of us have access to the same corporate media organizations which shape our society’s collective ideas.

Pozner cited numerous incidents throughout recent years, including the cases in Steubenville, Ohio, and UC Santa Barbara as examples of how the media obscures the factual truth about events, what she calls “the fatal consequences of journalistic failure.” Corporate press largely under-reports or ignores gender-based violence, not only doing a disservice to the victims, but also to the public for depriving them of the truth. Pozner said that if the media fails to report a gender-hate crime in its accurate context and not name it as such, they are essentially allowing it to continue.

“We are trained into apathy and into passive reception of media images because that’s the state in which advertising works most effectively and media production wants us to remain,” Pozner said.

Pozner heavily critiqued the media’s coverage of racial minorities, the gay/lesbian community, and women, arguing that the media often does not see these groups as valuable enough to be considered newsworthy.

“Media have far too often reacted with a collective shrug … they lull the public into apathy,” Pozner said.

Pozner also touched on a topic relevant to the student audience—how the media’s “manipulative lessons in masculinity” reinforce a rape culture on college campuses. Citing scenes from TV shows like “Sex and the City” and “Scandal,” Pozner showed how Hollywood teaches men that “no” means “yes”.

It was not all criticism in Pozner’s presentation, however. She concluded her lecture on a hopeful note, pointing out how news media is evolving with the current case against TV celebrity Bill Cosby. The fact that the allegations against him are being taken seriously represents substantial progress and is “changing the way we think about rape and rapists” in that the crime can be committed even by a respected community member like Cosby.

She also pointed to the use of social media platforms and “hashtag activism,” like #YesAllWomen and #BlackLivesMatter, as an effective way to promote societal change.

Armed with the knowledge provided by media literacy, Pozner believes we can all make a positive change.

“Amplify your voice in social media … I hope you’ll help in changing the conversation, you have that power,” Pozner said.

Attendance for this event was very strong, especially for 4 p.m. on a Friday, as Pozner noted. The presentation elicited a positive response from students.

“[It was] approachable and relatable to everything the typical female college student is going through,” Maggie Carlson ’18 said.

“Overall, I was impressed with her presentation because I felt it dug down to the core of the gender inequalities that continue to plague our society. There was no holding back on her part, which I think is absolutely necessary if we wish to break away from the patriarchal nature of the media that has such profound influences on culture and how women view themselves,” Liz Hammond ’18 said.

“Jennifer Pozner’s lecture provided a strong argument for the effect of media representation in distorting the facts about gun violence and sexual assault in the United States … Recognizing the ‘heavy’ nature of the material she was presenting, Pozner interlaced her talk with good-natured humor, which was appreciated by the large and enthusiastic, primarily student audience,” Davis said.

“I don’t think the women’s and gender studies department could have picked a more relevant speaker for today’s female college students,” Carlson said.