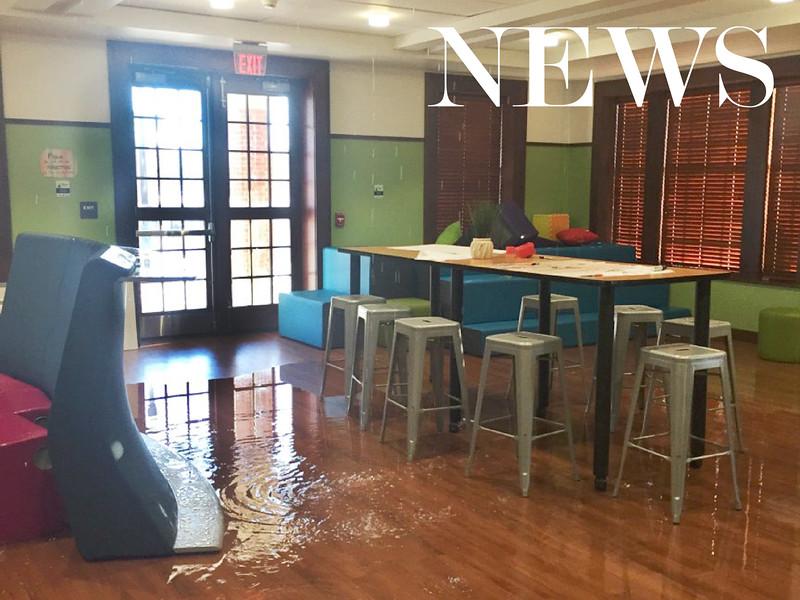 On Feb. 14, a two-inch water pipe in the attic of South Campus Apartment Building One broke, resulting in significant flooding and damage to the apartment complexes. Water reportedly poured out of second, third, and fourth story windows and seeped out the doors and ceilings of the main first-floor lounge.

Chief Communications Officer Andy Hirsch said that the leak damaged approximately 10 apartments. Regular hot and cold water delivery to the complex was not affected, nor were any life-safety systems, such as smoke, fire, and heat detectors.

Helen Vu ’16 lives in Building One and said that residents were alerted of the flooding by a fire alarm.

“[M]y roommates and I opened up the door to the main stairwell; there was water flooding down the stairs. This was the scariest part, as we did not know where it was coming from and feared that it was flooding in our apartment as well,” Vu said.

Mia Kamisar ’16 also lives in the building and said that while her apartment was unaffected, she saw water drizzling out of the ceiling. She also said that the flooding made the halls of the building damp and humid.

“They acted very quickly to vacuum and air out the floors. Facilities and our [Residential Advisor] were very on top of the whole process,” Kamisar said.

Hirsch said that the University has relocated several students to temporary housing in a nearby hotel, and if necessary will continue to offer temporary living arrangements for those directly impacted by the flood.

“We will communicate with students directly affected by the water damage about other accommodations, such as laundry services, dining options, and the reimbursement or replacement of damaged personal items,” Hirsch said.

Vu said she appreciated the attentiveness of University President John Bravman and Dean of Students Amy Badal, who personally visited her apartment on Sunday afternoon. She said that they informed her of what was going on and what steps were being taken to resolve the issue.

“Their presence eased my fears and made me feel supported and safe. I cannot imagine the logistics behind what they had to do all night to resolve and ease the problems. Thank you, your efforts are not going by unnoticed,” Vu said.

Students have voiced concerns about the South Campus Apartments in the past. In September 2015, The Bucknellian published that some students had reported technical issues associated with the apartments, including one leaking incident. Erim Yildirir ’17 was quoted saying he once woke up and saw a puddle on the floor and drip marks on the ceiling.

Kimberly Combatti ’16 said she thinks Sunday’s flooding episode is tied to bigger problems in the complexes.

“I think the situation begs [the asking of] some major questions. Did [the University] do this new construction cheaply and poorly, which is why there are issues, or did the construction company do things improperly and cut corners?” Combatti said.

The University has not released any information about the flooding’s possible connection to previously reported problems associated with construction. Facilities crews are currently working with an outside vendor with expertise in water remediation to assess the damage. Hirsch said that based on this evaluation, the University will recommend what steps should be taken.

In light of the breaking news, The Bucknellian published this story online on Monday, Feb. 15. On Tuesday Feb. 16, Hirsch confirmed that Sunday’s incident “is definitively not” connected to any previously reported issues regarding the apartments.