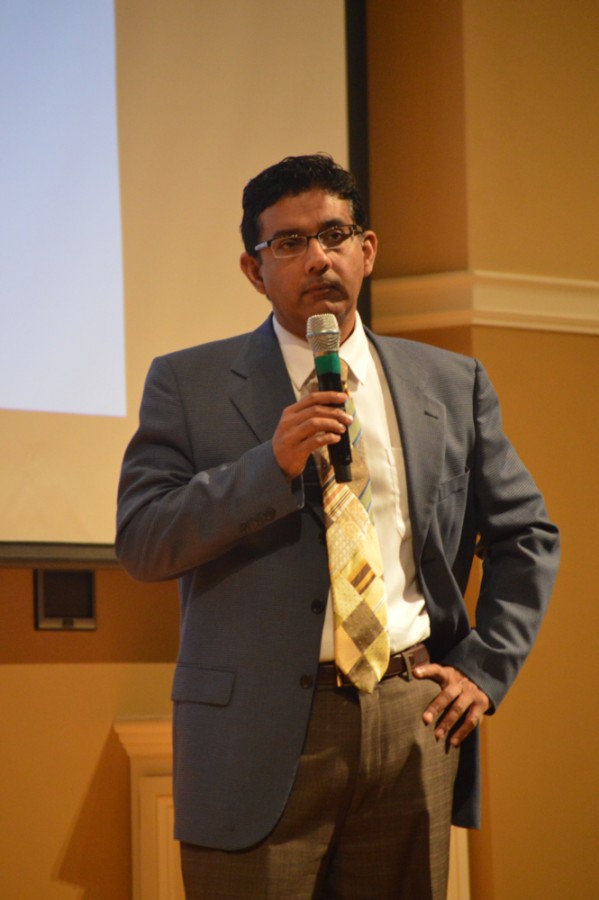 New York Times bestseller and scholar Dinesh D’Souza visited the University on Feb. 18 to share his thoughts about campus politics with students and faculty. D’Souza was hosted by the College Republicans of the University.

D’Souza has had a 25-year career as a writer, scholar, and public intellectual. A former policy analyst in the Reagan White House, D’Souza also served as the John M. Olin Fellow at the American Enterprise Institute, and the Robert and Karen Rishwain Fellow at the Hoover Institution at Stanford University. Additionally, he was president of The King’s College in New York City from 2010 to 2012.

D’Souza is known for his political commentary and was named one of the “top young public-policy makers in the country” by Investor’s Business Daily. His first book, “Illiberal Education: The Politics of Race and Sex on Campus” (1991), publicized the phenomenon of political correctness in America’s colleges and universities, and has been heralded as one of the most influential books of the 1990s.

After introductions, D’Souza jumped straight to the main point of his lecture. D’Souza wanted to “contribute intellectual diversity on this campus” and apply “pressure to the dominant liberalism of the time.” He hoped to not only share his political views with the Republican population, but also to elevate the debate that has been occurring on campus in the spirit of constructive engagement.

D’Souza made strong claims about the current administration and political climate. For instance, the writer discussed his own perception of modern racism, saying that while it has gone underground, it still is a powerful force in our society.

D’Souza then moved on to international affairs, explaining that what we hear about foreign policy in the news is nonsense.

“All of politics is based upon the doctrine of the lesser evil,” D’Souza said. “In the real world, you are choosing between the bad guy and the really bad guy.”

Students were impressed that “such a high-profile and influential voice in the conservative sphere” spoke at the University, according to Ryan Riethmiller ’17. “[Having] someone who is willing to share ideas that often don’t get shared on college campuses helps us grow as individuals, whether we agree or not. What better place to hear both sides of an argument and critically evaluate issues than at a college campus?” Riethmiller said.

Toward the end of the talk, D’Souza brought the discussion back to the University, encouraging students to become more politically active and vocal.

“On the campus, these issues should be debated and they’re not,” D’Souza said. “American affluence can no longer be taken for granted.”

“This is a call towards restoring the university,” D’Souza said. “Restoring it to what it can and ought to be.”