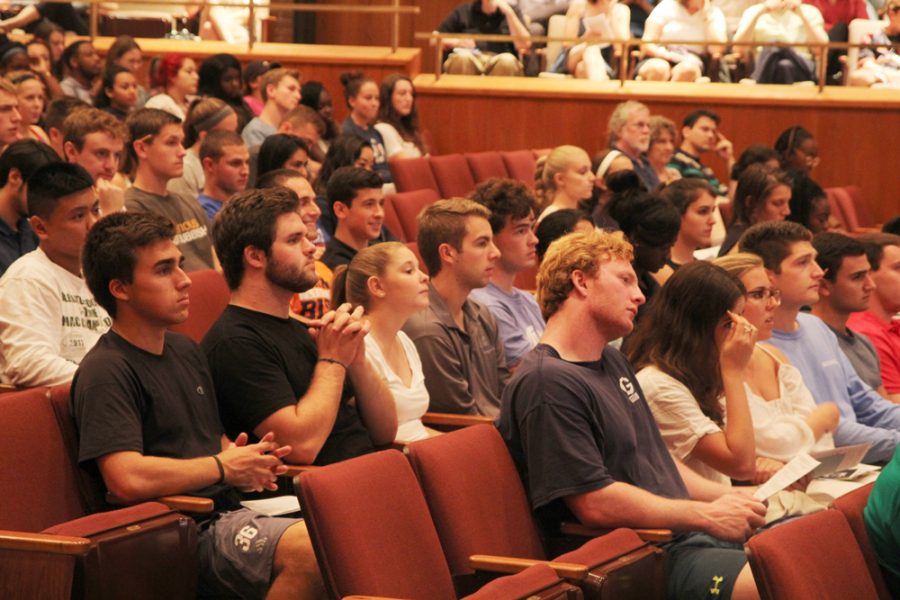 “These seats won’t fill up … Three years and they still aren’t filled,” Anthony Scrima ’18 said during the community-based discussion about the strong presence of social injustice in the world, pointing out the disheartening lack of attendance.

The discussion, titled “Conscience, Courage, and Community: Bucknell Responds to Injustice Today,” took place on Sept. 6 in the Weis Center. The talk was in response to the all-too-frequent acts of violence that have occurred in recent months across the globe, including the June shooting at a gay nightclub in Orlando, the shootings both by and of police officers, the attack in France on Bastille Day, and the Stanford University rape case.

Writing & Teaching Consultant Peg Cronin, who identifies as a queer feminist, and Harvey Edwards ’78, a professor at Susquehanna University who remains invested in University affairs, facilitated the talk. Cronin and Edwards informed the audience that the event was not meant to be a lecture, but rather a discussion among peers.

“We probably don’t have all the answers here, but we can continue the conversation and extend it to others who are outside of this space,” Edwards said.

There was also discussion of the outrage that followed NFL player Colin Kaepernick’s choice to sit during the national anthem; namely, the split between individuals who are outraged that this occurred, and those who believe that it was a healthy expression of free speech.

Aside from the group discussions, three speakers took the stage and addressed the crowd: Director of Multicultural Student Services Rosalie Rodriguez, Quentin Hugee ’18, and Mona Mohammed ’16.

Rodriguez described how the nightclub shooting in Orlando terrified her because of her similarity to the people who were there that night. She lamented the lack of available spaces for LGBTQ+ members to act like their true selves without risking fetishization.

Hugee shared his personal losses of family and friends with the audience, including his own experience of being robbed at gunpoint. He asked the audience to help him prevent all violent crime, not merely the events that are sensationalized on the news.

“It’s not just about black on black crime, it’s about prevention. I don’t have the answer to how to prevent these violent crimes, but I would like to find a way,” Hugee said.

Mohammed echoed a similar sentiment by pointing out how many of her peers have no knowledge of the war raging on in her home country, Yemen, because these events do not make American headlines.

Following the three speakers, there was a free writing session and an open microphone for comments and reflections, during which students and faculty called attention to specific problems that occur on the University’s campus. One of the most pertinent questions regarded the large number of students who did not choose to attend the discussion. How could those in attendance reach out to the rest of the University students?

Suggestions included holding small group discussions in the classroom and a general refusal to be privy to non-inclusive, misogynistic, and hateful language.

Some students pointed to close-mindedness as the root of the problem.

“I think we’re all close-minded in our own ways, because we try to shut down ideas and opinions that differ from our own. We need to take time to understand why people have certain ideas, and to consider the struggles they’ve gone through. Hearing someone’s life story will help you understand why they think in a certain way. If we just hear their beliefs and shut them down with an attack, nothing beneficial will happen. This happens way too often on this campus,” Scrima said.

The event also facilitated discussion of the need for individuals to engage in conversations that make them feel uncomfortable, as well as the unfortunate tendency to focus exclusively on the actions of individuals while ignoring the institution in which these acts of violence are permissible.

“We need to make ourselves feel uncomfortable so that other people don’t feel that way in the future,” Rebecca Forbes ’17 said.

“There is no general call to change the institution. We can’t change anything until we get down to the root of the problem; otherwise the same problems will keep cropping up,” Matthew Alexander ’19 said.

In summary of the goals of the community, “Our words have to end in action,” Edwards said.