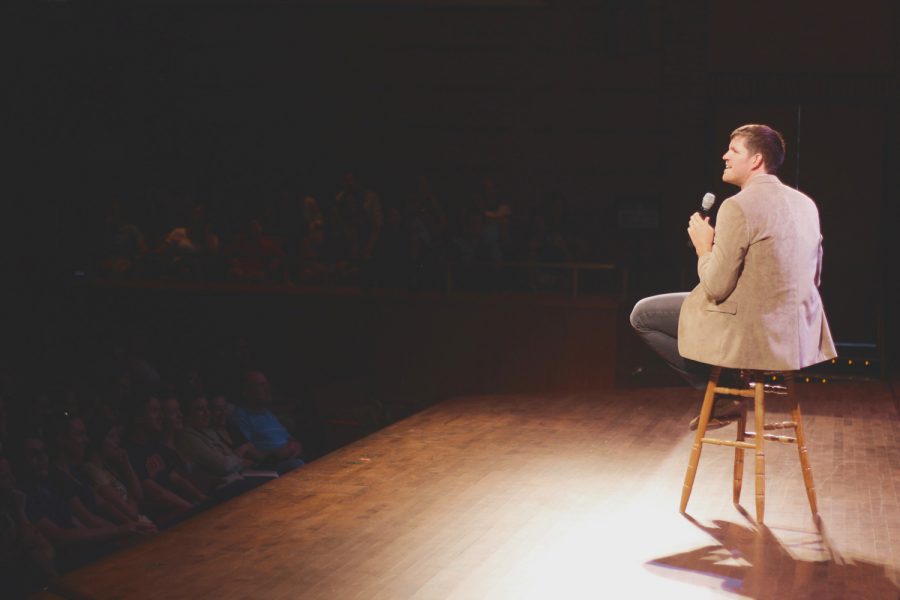 From bonds to blogs: How ‘Humans of New York’ garnered 18 million followers
“The Humans of New York [HONY] that I risked everything to pursue looks nothing like the HONY that became successful … If I had waited for the idea of HONY before I began, I never would have started … I think that is one of the big reasons that I was able to be successful,” the creator of the blog “Humans of New York” Brandon Stanton said.

Stanton visited the University on Sept. 13 as part of the Student Lectureship Series, and delivered his talk in the Weis Center for the Performing Arts. Stanton discussed his experiences and offered advice to those in the audience. He addressed topics that students face on a daily basis: failure, success, media, social skills, diversity, and even the upcoming presidential election.

“Even though there’s 18 million people who follow the blog, the interactions are very digital … there’s definitely a different energy to meeting a thousand people who follow the blog at one time,” Stanton said. “The very first time it had ever happened, I had been working on HONY for two years and hundreds of people showed up to my book signing and it was so overwhelming to me.”

Stanton began by discussing the start of his journey: upon termination from his job as a bond trader, Stanton moved to New York City with the intention of photographing 10,000 strangers. His initial project soon turned its focus to interviews instead.

“When I have someone in front of me, my goal is always to learn something about that person that I haven’t heard from any of the other thousand other people I’ve talked to … I’m almost always looking for a story. HONY became my effort to tell the stories of people on the street in the best way possible,” Stanton said.

The project later expanded to include in-depth interviews of his subjects, as well as worldwide adventures, charities, and crowdsourcing to raise money for people in need.

“The photography is so secondary right now, it’s changed so much. I don’t really even consider myself a photographer anymore even though I take pictures every single day. It’s all become about the story, the quote, the interview,” Stanton said.

Stanton shared photos and memories from the past six years of his journey. His favorite experiences are from his international visits to countries like Pakistan, Iraq, and Iran, among others, because it involves “traveling to countries that are not visited by my audience, or feared, maybe, places that have negative narratives about them in the media,” Stanton said. “HONY is most potent, most impactful, in places that are feared because it’s much harder to be afraid of a population or country when you meet them one at a time.”

Many University students relished the opportunity to hear Stanton speak.

“The committee was so excited to have him because of how relevant his message is to students. His success is the type of story we can most relate to,” Jake Malavsky ’19 said.

“I loved seeing the first picture he took of the little kids on the subway. It’s amazing to see where it all started and how he’s transformed his work into what it is today,” Kelly Pretz ’18 said.

Many students have seen the University’s HONY-inspired Facebook page, Humans of Bucknell, which features students’ photographs and quotes from an anonymous interviewer. Stanton said that he has learned to enjoy similar projects from around the world.

“The very first time I saw another ‘Humans of a city’ pop up, I was like ‘Oh no, that’s my idea! Someone’s taking my idea!’ but as HONY has grown and I’ve become much more comfortable, my perception of it has become much more embracing, I think it’s great and some of them are really good,” Stanton said.

Stanton also offered relevant advice for struggles that students face: finding a career and that long sought after “purpose” in life.

“If you’re waiting for that idea that is a silver bullet with no chance of failure before you’re beginning, it’s never going to happen … you cannot wait for perfect,” Stanton said. “It’s not about not working. That doesn’t happen … the dream is to get to a place where you can choose your work.”