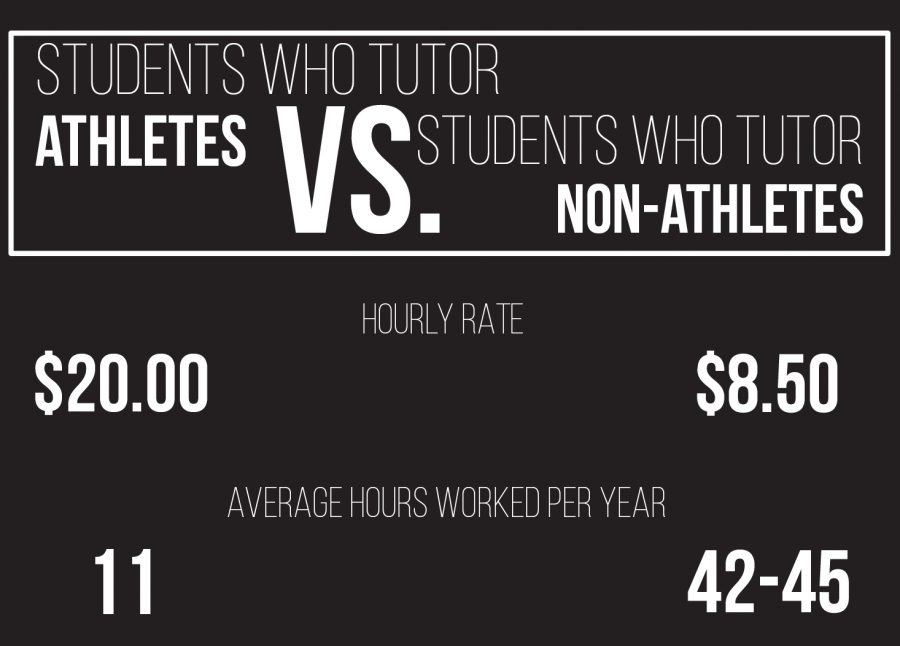 Many University students have the opportunity to earn money by tutoring other students on campus. Specifically, students can seek employment as a tutor at the University’s Teaching & Learning Center (TLC), as a peer-writing consultant at the Writing Center, or as a tutor to student-athletes through the Department of Athletics & Recreation. However, students who obtain employment as a tutor through the athletics department will earn roughly three times the amount they would earn at the TLC or at the Writing Center.

Professor of Education and Director of the TLC Sue Ellen Henry also acts as the co-chair of the Committee on Campus and Student Life (CCSL) alongside student co-chair Danielle Retcho ’17, and has been investigating this pay inequity since last semester. CCSL consists of six students, six faculty members, and two administrators who ultimately aim to inform the President’s Office of potential campus issues that should be addressed or can be improved.

“When it was brought up to the committee that there was a potential difference in pay, we thought ‘well, how does CCSL fit into this discussion? And how can we either contribute to it or let others know that this issue exists?’” Retcho said.

Last semester, the CCSL sent a letter to the University’s Human Resources querying this pay difference. In response, a small faction led by Vice President for Human Resources Pierre Joanis verified the issue after conducting some historical analysis.

“What I heard from Human Resources is that a tutor from athletics tends to work between 6 and 11 hours a year as a tutor; the average tutor in the TLC works between 42 and 45 hours a year, but because of the pay differential, over the course of the year the students will make about the same amount,” Henry said.

Henry said that this disparity in pay is largely the result of differences in budget and in the number of students employed. While the athletics department seeks and employs six to 12 student tutors per year, the Writing Center employs 30–40 students per year, and the TLC employs over 160 students per year. The athletics department’s budget for tutors is deployed from a pre-existing number, yet the TLC and Writing Center have budgets that are “built from the ground up.”

“Athletics have historically had a budget that they use to employ student-athletes, and they have an x amount of dollars in it,” Henry said. “The TLC in particular had to build a budget for establishing an hourly rate for the number of people they wanted to hire, the number of classes it wanted to support, the number of study groups, and the number of tutors it needed to offer to meet demand from the community.”

“These are groups of students who seemed to ostensibly be doing roughly the same work, with the same kind of intellectual and academic requirements and preparation for doing the work, but one group is making perhaps three times what the other group is making,” Henry said.

Maisha Kelly, the Senior Associate Director of Athletics, said that less students are hired through the athletics department both because there is a smaller student-athlete population and because the department encourages student-athletes to first employ existing resources accessible to all students.

“This program is for individual tutor requests, for those who have exhausted all existing resources available to them. The number is small and single-client based rather than a broad-based tutoring program for a large guaranteed number of students,” said Kelly.

Henry stated that, according to Human Resources, student employment decisions are “decentralized,” meaning that there is currently no uniform oversight of pay levels, nor is there supervision of student employees or other student employment-related matters. Tutors in the athletics department must meet with University NCAA Compliance staff and with the TLC to undergo training and orientation, according to Kelly.

Student-athletes receive a tutor after identifying “a need for additional academic support and exhausting the avenues provided by the professor, [Graduate Assistant] or [Teaching Assistant], the Writing Center and the [TLC],” explained Kelly. The student services staff proceeds to aid the student in collaborating with the specified academic department and/or TLC to find an appropriate tutor.

CCSL has analyzed this issue not just as an issue between the TLC, the Writing Center, and the athletics department, but as “more emblematic of the issue of pay differentials and inequity that might be occurring on campus,” Henry said.

“One of the things we point out is that we are aware that student callers and tour guides make more per hour than students working for the TLC or the Writing Center. Both sets of work are important, but one set of that work might require more of an intellectual, academic point of view, and in that way might be harder,” Henry said.

CCSL has since explained the issue to Provost Barbara Altmann, who intends to discuss the issue further with Joanis and others within Human Resources.

Henry said that she wanted to emphasize that CCSL’s investigation of this issue of student pay inequity does not imply the prevalence of “a smoking gun.”

“I don’t think any of this is purposeful. I don’t think there’s some sort of conspiracy to pay people doing intellectual work less just because they can get away with it. I don’t think that it’s because we [the University] value athletes more than we do the everyday student who just comes in looking for study group support or tutoring. It really has not been a plan–just something that’s occurred, an unanticipated side effect,” Henry said.

“There is an inequity on campus. And in this campus climate, where we’re trying to … make our campus more inclusive rather than exclusive, this is something that should be looked into. And whether that happens this year, next year, 10 years from now … it’s something I would like to see happen,” Retcho said.

In response to whether or not she believes students should be paid more than tutor student-athletes, Kelly stated that the issue “is a compensation matter that has been benchmarked, both nationally and within the Patriot League, for single-client-based tutoring,” adding that the athletics department has “instituted comparable rates for the past 15 years, all within the guidelines of the University’s Office of Finance.”

A step forward would be “to say that we’re really committed to equity … paying people equally for equal forms of work they do across campus,” Henry said. “I think if in fact we’re serious about equity, we won’t overlook an awareness of a lot of inequity that might be occurring, particularly in regard to how we support people financially. This is a really expensive education, so we should be thoughtful.”
Editor’s note: We regret that this article ran in our print Sept. 16 edition without viewpoints from the Athletics Department. This updated online edition reflects this substantial change.