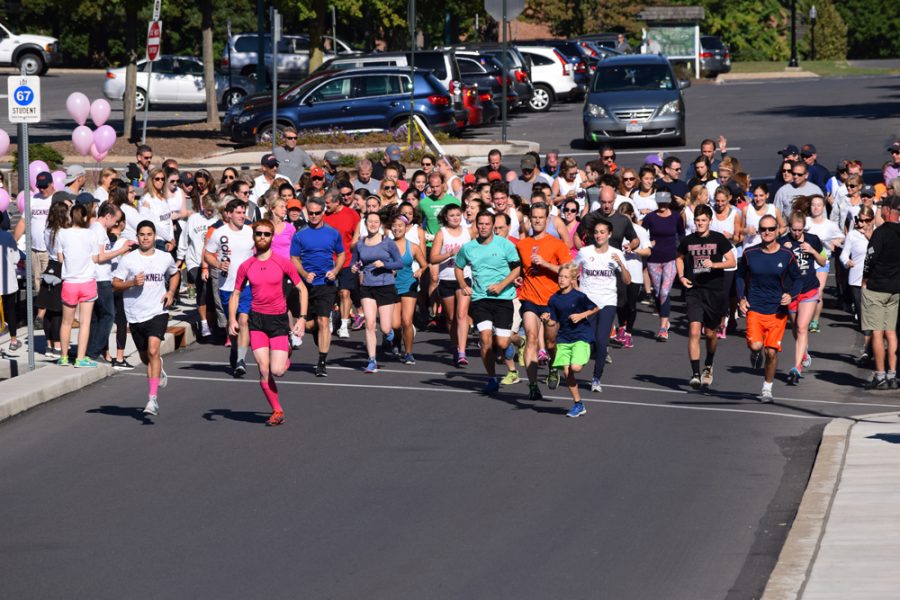 On the morning of the final day of the University’s Family Weekend, Colleges Against Cancer hosted its annual “Paint Bucknell Pink” 5K run/walk to benefit and raise awareness for breast cancer. Runners gathered for the event outside the Christy Mathewson-Memorial Stadium on Sept. 25 at 10 a.m.

Colleges Against Cancer has organized Paint Bucknell Pink for 15 consecutive years. For some, the run is a Family Weekend tradition.

“My parents have done the walk every year since my sister was at Bucknell, so now we have carried on the parent’s weekend tradition for me too,” Molly Horning ’19 said.

This year, approximately 115 runners attended the event, raising around $5,000 dollars between race registration and T-shirt sales.

“The money will go towards providing free mammograms at Evangelical Hospital, as well as the American Cancer Society,” Colleges Against Cancer member Alex Katz ’17 said.

The organization spends a lot of time planning the event, first seeking approval from the University, the town of Lewisburg, Public Safety, and the Buffalo Valley Regional Police Department. In addition to designing and selling T-shirts, they also advertised and registered students for the event in the days leading up to the race.

“It was a team effort, and none of it would have been possible without the other members of the Colleges Against Cancer club,” Katz said.

“It was so much fun to run for such a great organization with so many of my friends and their families. It was such a beautiful morning made only more stunning by the sight of so many people jogging for a cause,” Midge Zuk ’19 said.

This November, Colleges Against Cancer will hold the Great American Smokeout to raise awareness for the negative effects of smoking. The organization will also collaborate with the University’s Relay for Life committee to help plan their spring event, Relay for Life.