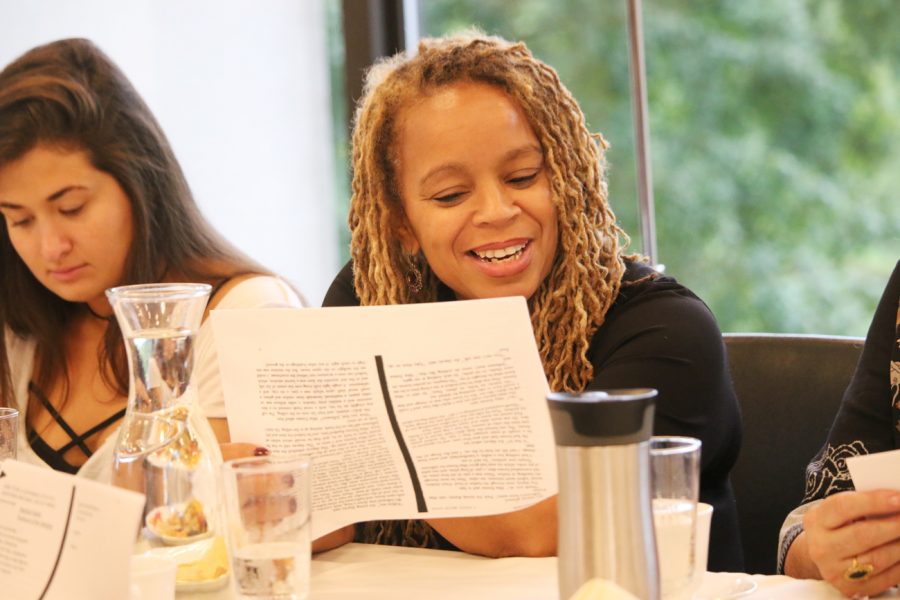 From Sept. 28 to Oct. 1 the Griot Institute for Africana Studies hosted the African American Art: Activism and Aesthetics Conference. The conference aimed to spark conversations between scholars and artists about the relationships between African American activism and contemporary art. Each day of the conference touched on different aspects of African American art, with dance, music and reading performances as well as a host of diverse panels.
Sept. 28
The conference kicked off with a conversation involving Nathaniel Hunt and Indigo Moor. Hunt is a dancer and choreographer, and his choreography was performed in 2012 at the Kennedy Center in Washington and at the National College Dance Festival. Hunt recently was a member of Ailey II, which is the second company to the Alvin Ailey American Dance Theater and has most recently become a member of Ballet Hispánico. Moor is a poet, playwright, screenplay writer, and a physical design engineer. His books and other works have received many accolades over the past few years. The talk was co-sponsored by the Department of Theatre &Dance and the Stadler Center for Poetry.
Sept. 29
Sept. 29 began with a second talk by Moor. The talk was focused on the past, present, real, and invented cultures as they are presented in the process of writing. The workshop was focused on the examination of several aspects of history and how they influence the creation of powerful poetry.

Later in the evening, the conference kicked off with a few words from Associate Provost Robert Midkiff.

“From my perspective, one of the key take-aways [from the conference] was a reminder of the powerful connection between art and activism—that art, in all of its many forms, is often not only an expression of our thoughts and feelings as we attempt to understand our world, it also is a call to action to bring about change in our world,” Midkiff said of the conference in general.

Midkiff’s remarks were followed by a poetry reading with Moor, a dance performance by Hunt, and a performance by the Bucknell Jazz Quartet. Moor is the author of “Through the Stonecutter’s Window” and “Tap-Root.”
Sept. 30
Several panels happened on the morning of Sept. 30—one notable panel included a performance by artist-in-residence at the African American Policy Forum Abby Dobson.

“It was great to see such an inspiring and stimulating group of scholars and artists on campus to talk about art and activism. The most powerful moment for me was the performance of Abby Dobson, artist-in-residence at the African American Policy Forum, who gave a vocal accompaniment to a video about black women’s and girls’ experiences of police violence. It was really moving,” Associate Professor of English Raphe Dalleo said.

Esmeralda Luna ’19 said that “[her] favorite event was the second panel on Friday morning, because it shed light on the issues that women of color face, which is something that is spoken about [neither] in the media nor in class.”

“I believe that Carmen Gillespie did a great job with the whole event, and the Griot is a great addition to this campus. However, I really wish that more people would show up to these events,” Luna said.

Later in the evening, artist Carrie Mae Weems gave the keynote address to truly kick off the conference. Professor of art history Christiane Andersson praised her appearance at the conference, saying “[it] brought Carrie Mae Weems to campus, one of the most important and influential activist artists of our time. Hearing her speak about her work was immensely exciting and inspiring. It showed us at Bucknell how much activist art can achieve.”

After the keynote address and Q&A, there were two performances: one by saxophonist Jimmy Greene, and another by “Love in Action”, which featured Rene Rosnes and Jeff “Tain” Watts.
Oct. 1
The day began with more panels, the first focused on black bodies and creating a space for blackness in dance, particularly ballet. The second panel focused on activism in visual art, especially painting, as well as activism in the performing arts.

Conversation that day revolved around the new hit musical “Hamilton,” and its importance in society. The musical has been the subject of praise and equal controversy—many claim that it isn’t the best portrayal of hip-hop, while others praise it for bringing black bodies and people of color to the Broadway stage.

The discussion of Hamilton was the last event of the conference, which has received much praise for bringing many important individuals with various experiences in the arts to the University.

The Griot will be hosting several field trips in November, in addition to the Storytelling Project, which pulls together narratives from University students.