An upset for the ages 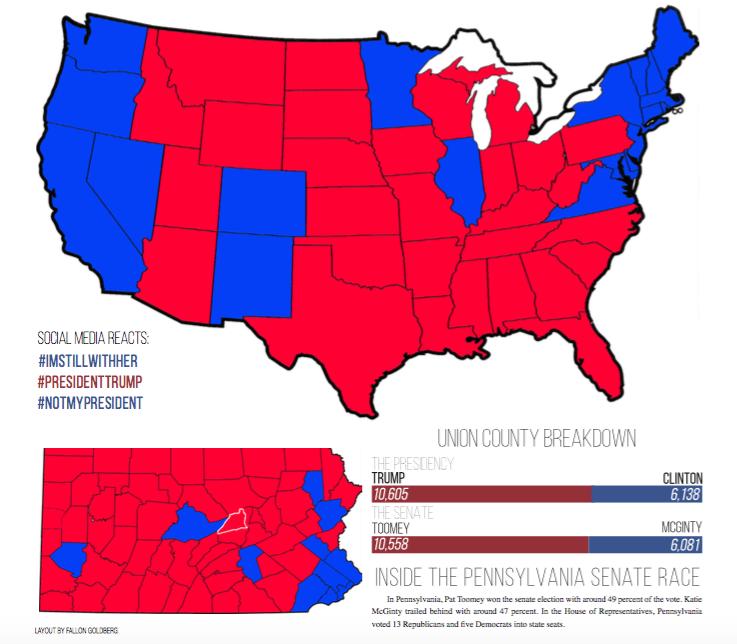 In one of the biggest election upsets in modern American history, Donald Trump was elected 45th President of the United States. While the presidential race was closer than most pollsters and pundits could predict, the Electoral College map quickly became damning evidence for an unprecedented Trump victory across the Rust Belt states, North Carolina, and Florida, albeit by small margins.

It is important to acknowledge that a Trump presidency leading up to Election Night was a nearly unimaginable scenario across Republican and Democrat party lines. Nearly no one saw this outcome. Most pollsters predicted a solid Hillary Clinton victory. However, by 11 p.m. on Nov. 8 night, the reality of a likely Trump presidency set in.

Trump outmaneuvered Clinton by winning the battleground states of Pennsylvania, Michigan, and Florida, where he gained 279 electoral votes opposed to Clinton’s 228 electoral votes total. How could projections have gotten this election so wrong?

There are several theories as to why polls so inaccurately predicted Clinton winning with a large margin of victory. For example, a USA Today article titled “How Did Pollsters get Trump, Clinton Election so Wrong?” noted that there were many more “hidden Trump” voters than were surveyed before the election, which may have contributed to the discrepancies between the predictions and the actual outcome.

They pointed out that people were much more embarrassed to admit that they were voting for Trump than they were for Clinton, so gauges in support were flawed. Analysts also postulated that Director of the FBI James Comey’s choice to publicly review Clinton’s emails just days before the election may have swayed voters.

Many exit polls released on Nov. 9 also pointed to Clinton’s weak hold of white voters in industrial, metropolitan areas throughout the midwest. For instance, in 2012 in Wayne County, Mich. Barack Obama beat Mitt Romney by more than 380,000 votes. Clinton’s hold of the county in 2016 was less than 290,000 votes, which means that she lost significant support in those regions. Similar trends appeared for Cleveland and Milwaukee.

Inside the Pennsylvania Senate race:

In Pennsylvania, Pat Toomey won the senate election with around 49 percent of the vote. Katie McGinty trailed behind with around 47 percent. In the House of Representatives, Pennsylvania voted 13 Republicans and five Democrats into state seats.