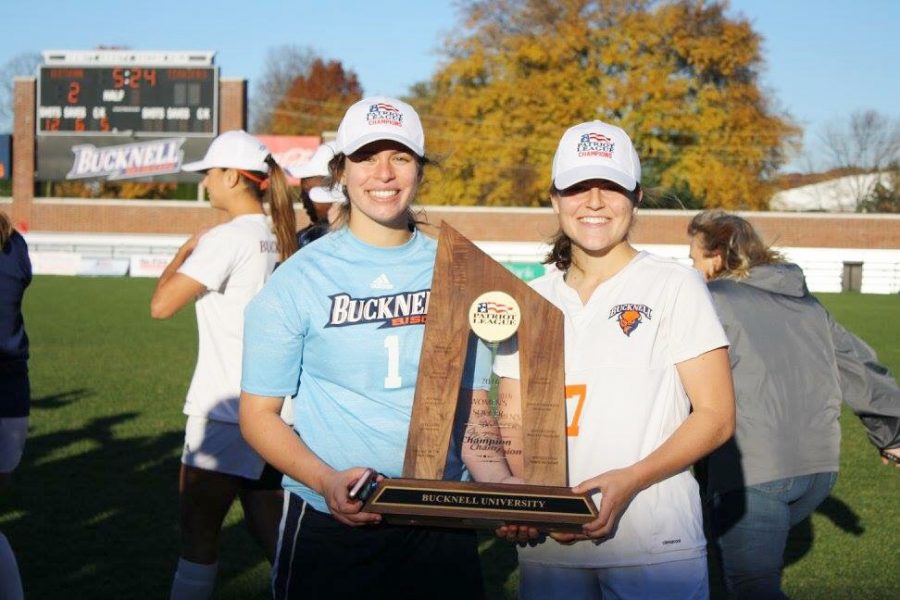 Every young athlete dreams of wearing a national team jersey one day. Dani Kaufman ’20 and Gabi Rosenfeld ’18, Bison women’s soccer players, have been granted the opportunity to do just that.

Kaufman and Rosenfeld, teammates on the Bison women’s soccer team, have been chosen to play on the American women’s soccer team at the Maccabiah Games in Israel this summer. The Games are held every four years, in similar fashion to the Olympics, and the athletes are all members of the Jewish faith. About 10,000 athletes from 80 countries attend the games, representing their nations, their sports, and their religion. 2017 will be the event’s 20th year.

Rosenfeld has been involved with the Maccabiah organization since she was 11 years old, playing in the JCC Regional Games and the JCC National Games growing up. Four years ago, she had her first chance to go to Israel as a part of the U.S. team for the 2013 Maccabiah World Games. Rosenfeld attended tryouts for the 2017 team in Philadelphia in January, and heard a few weeks later that she had once again made the roster.

Kaufman could not attend tryouts, so her selection process was a bit different than the process for many of the other women on the team. She worked with Bison women’s soccer assistant coach David Madsen to assemble film of her play to send to the Maccabiah coach. Since the fall, Madsen had been in communication with the Maccabiah coaches, informing them of Kaufman’s strengths and challenges on and off the field, both as a player and as a person. Kaufman’s club goalkeeper trainer was also in contact with the Maccabiah coaches advocating for her selection.

“I was so nervous because I never really got a ‘tryout’ and all my friends and family kept asking me if I made it yet,” Kaufman said. You can imagine her relief when, on the second day of second semester, she received an email telling her that she had made the team.

Kaufman’s Bison coaches also expressed their excitement about her accomplishment and how it can lead to improvement in her collegiate soccer career, as well.

“I think Dani has done a good job of learning and working to establish herself within our program, just like all incoming players have to do when they join a college team,” Madsen said. “We are proud and very excited for Dani and know that she has a very special opportunity to represent her country this summer.  I think it will be a great way to prepare her in the best way for our fall season.”

Now that they’ve been officially selected, Kaufman and Rosenfeld will travel to Israel this summer for five weeks to train with the American team in preparation for the tournament. They will be able to tour the country, which is one of the aspects of this opportunity that Kaufman is most looking forward to. Her brother and father have shared with her fond memories and photographs from their trips to Israel, and she is looking forward to visiting for the first time.

“I never really get to travel other than family trips or for soccer,” Kaufman said. Now, soccer is allowing her to take the trip of a lifetime.

Rosenfeld, for her part, is similarly excited to go to Israel for her second time, but also clearly has her eyes set on the competition.

“I am most looking forward to representing my country in the third largest sports event in the world. And hopefully, winning a gold medal!” Rosenfeld said.

Amid all of the excitement, Kaufman does admit that she is a bit nervous about being on the Maccabiah team. She’ll have to adjust to being away from home and gain the confidence to play her best on a team of elite athletes. However, the challenges all come with the amazing opportunity she’s been granted, and Kaufman is so grateful for the chance to represent her country by playing soccer. It’s a chance that only a select few get to experience.

“As a little kid you watch the Olympics and you think maybe one day you could do that. I was overjoyed when I found out I would not only be representing my school but the USA as a whole through my faith … Any opportunity to wear the Stars and Stripes and compete in the sport I love is amazing. I consider myself really lucky,” Kaufman said.

Rosenfeld also expressed her pride and gratitude for this opportunity and to the Maccabiah organization as a whole.

“This organization has been a huge part of my life and has helped shape who I am today. It continues to give me the opportunity to build my Jewish pride through a sport that I love … [and] the feeling of putting on a USA jersey is indescribable,” Rosenfeld said.  “It is an incredible honor to be able to represent my country, and I am so excited that I get the chance to do it again!”