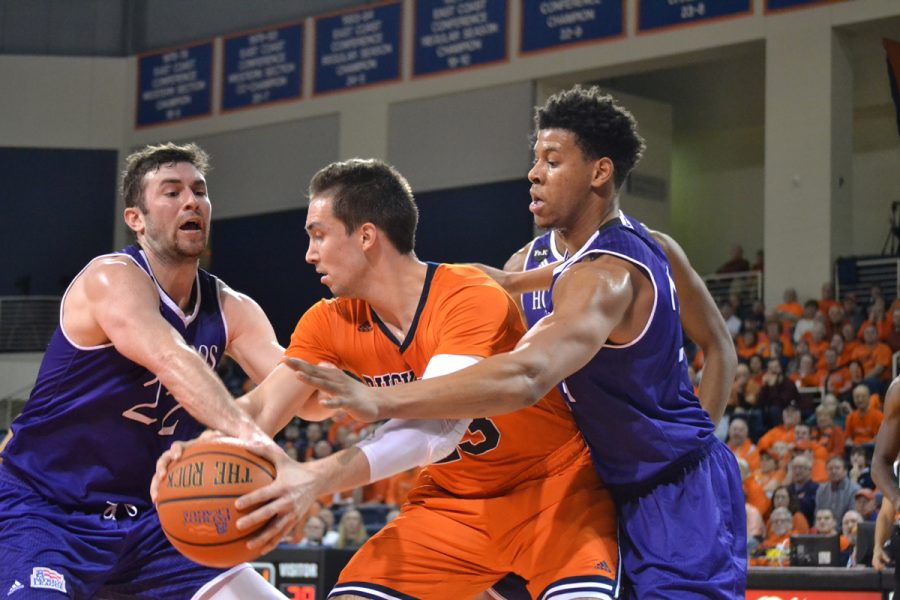 The Bison men’s basketball team, who are 19-6 overall and 11-1 in Patriot League play, posted a dominant home win against Holy Cross on Feb. 6, with a final score of 82-68. Zach Thomas ’18 contributed heavily to the win, scoring a career-high 27 points. This win ties a school record of seven consecutive double-digit victories.

The Bison had an impressive start, going on a 13-4 run to open the game. Thomas contributed eight points and two assists to the initial run. Thomas proved to be a problem for Holy Cross all night, finishing the first half with 16 points.

“Coming into the game, I knew that they would play a lot of 1-3-1 zone defense. Based off of that I knew that I was going to get a lot of open looks at the top of the key,” Thomas said. He made sure to take advantage of those open shots.

Offensively, Holy Cross could not find an answer to the stellar defense of the Orange and Blue. The strong effort on the defensive end of the court gave players such as Thomas, Kimbal Mackenzie ’19, and Stephen Brown ’18 opportunities to be more aggressive on the offensive end. The Bison ended the first half 48-33, shooting over 62 percent from the field and 56 percent from the 3-point line.

In the second half, there were no signs of the Bison slowing down to allow Holy Cross to get back into the game. John Azzinaro ’17 scored five points in 17 seconds, adding even more momentum.

The Bison showed no signs of losing that commanding lead. The Orange and Blue ended up finishing the game shooting an even 50 percent from the field and 43 percent from beyond the arc, making 13 of 30. It was the ninth game in their last 11 in which they made at least 50 percent of their shots.

Playing against a zone defense opens up many opportunities for an offense, so ball movement for the Orange and Blue was a significant key to the win. Constantly finding the open man exploited the weaknesses in Holy Cross’ defense, allowing the Bison to rack up assists. Mackenzie recorded a career-tying seven assists in the game. Thomas credits the ball movement from his teammates to the team’s early success and strong start overall.

“My teammates found me in the right spot and I was able to make some shots early to get us going,” Thomas said.

Additionally, with the exceptional performances from Bison’s post players Nana Foulland ’18 and Thomas, Holy Cross had little chance of stopping them from scoring. With this came more chances for the Orange and Blue to fire from behind the arc.

“They [Holy Cross] run two different types of zones, and our big guys inside attract a lot of attention. This made it easy to move the ball around the perimeter and find shooters,” Mackenzie said.

With the win, the Bison increase their Patriot League first-place lead to three games. The team will look to continue their hot streak as they host Colgate on Feb. 13.