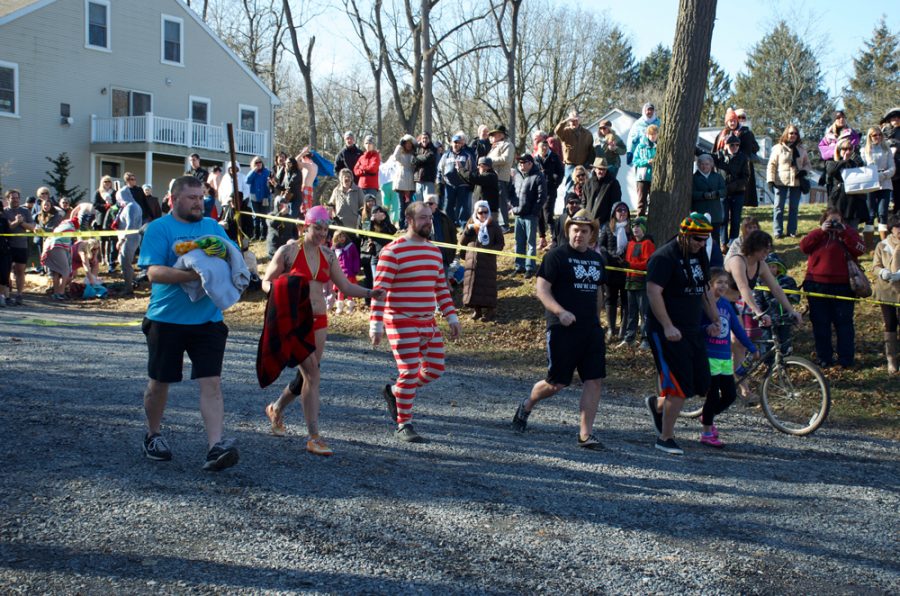 Around one hundred students, faculty, staff, and community members jumped into the Susquehanna River from the St. George Street Landing on Feb. 4 for the 12th Annual Polar Bear Plunge. The plunge was one of several events that made up the Lewisburg Ice Festival and supported the Lewisburg Downtown Partnership, a local nonprofit that raises money to transform downtown Lewisburg into a cultural and economic center.

The event was organized by Lynn Pierson, the Assistant Director of Community Service in the Office of Civic Engagement at the University. Pierson said that the event went as “smoothly as she had hoped.”

“I was nervous about how cold the water would be because I’ve never done the Polar Plunge before. Once I got there, the atmosphere was so exciting that my friends and I were no longer nervous. We ran in and out so quickly we couldn’t even feel the cold,” Colleen Hanisco ’19 said.

These featured student government members motivated students and faculty members to pledge money and send the participants into the freezing water. On the other hand, there were also donations to keep specific participants dry on land.

The members of BSG raised money for the Nueva Vida Health Clinic in Nicaragua, which provides basic health care to a community of 15,000 residents where the unemployment rate is more than 80 percent. In total, the student government participants, in addition to Director of Campus Activities and Student Organizations and BSG advisor Mike Duignan, raised $1,100.

Duignan said that his successful fundraising was a direct result of a social media push aimed at those who would take pleasure out of seeing him jump in the river. He said that “the first ten feet or so weren’t too bad,” but once the water got into his shoes he started to feel the cold.

The Polar Bear Plunge has been received warmly by students and faculty alike.

“I would love to make the Polar Bear Plunge an annual tradition with my friends,” Claire Helmers ’19 said.

“There was a lot of energy at the event, which kept me warm even in the thirty-something degree water. I’m glad that I took the plunge alongside fellow Bucknellians, professors, and Lewisburg community members and would urge others to get involved next year. I am sure you will find me in the Susquehanna next February,” Houldin said.