Women’s lacrosse off to best start in 20 years 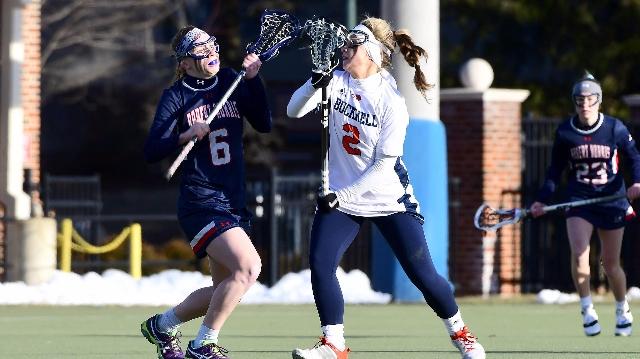 The Bison women’s lacrosse team now has its best six-game start since 1997. The Orange and Blue rallied to defeat visiting Manhattan 8-7 in a non-conference game on March 5, improving to 5-1 overall.

Early in the contest, the Orange and Blue trailed 2-0, only to turn around and score six of the next seven goals. Getting the Bison on the board was Audrey Walsh ’19, scoring off an assist from Eve Lukowski ’18. Tying the game was Sarah Galzerano ’18 with an assist from Christina Manis ’17. The teams headed into halftime knotted at 2-2.

Manhattan scored early in the second half to make the score 3-2. Soon enough the Bison picked up momentum and went on a 4-0 run. Galzerano lit the spark with a goal tying the contest at 3-3, followed by Walsh, Manis, and Bridget Shaffrey ’17 all scoring in a time frame of 2:26 minutes. Manhattan countered the Bison’s offense with a run of their own, taking back the lead 7-6. The Jaspers failed to add an eighth goal after one of their player’s sticks was deemed illegal.

With just 3:32 minutes left in the game, Maddy Molinari ’17, Patriot League Midfielder of the Week, tied the game 7-7 with an assist from Galzerano. Just 14 seconds after Molinari’s goal, Manis scored the game-winner, sealing the victory.

In goal, Jamie DeWitt ’19 tallied five saves in the contest to keep the Bison alive. The Orange and Blue finished the game with a 17-12 advantage in shots on goals. DeWitt commended her team for their determination in securing the win.

“I think our win against Manhattan was not our team’s best game. However, we handled adversity and were able to pull out a win, which is all that matters. We can learn from the game and now are preparing for Patriot League play,” DeWitt said.

Walsh echoed DeWitt’s statements, adding that the Bison’s poise in the closing minutes of the match made the difference in the win.

“I would say we didn’t have our strongest game, but in the end we pulled through and really played together and played for each other. I think that along with the composure we showed was why we were successful in the end,” Walsh said.

Up next, the Bison will travel to Philadelphia to take on the Temple Owls on March 12 at 1 p.m.