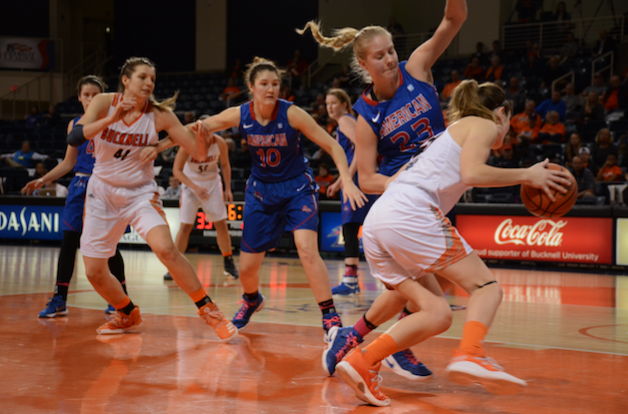 On March 10, the day that kicked off spring break at the University, the Bison women’s basketball team took down American University 69-57 in the Patriot League semifinals to advance to the program’s first championship game in nine years. Despite the unfortunate timing of the game, there was still a substantial crowd in Sojka Pavilion rising to their feet and breathing a sigh of relief as the clock ticked down to zero.

The game got off to a slow start, with the Bison and Eagles trading leads several times during the first quarter. Gia Hayes ’20 hit a 3-pointer in the waning seconds of the first quarter, giving the Orange and Blue the 17-15 advantage with what head coach Aaron Roussell called “the shot of that first half.” Kyi English ’19 also gave the offense a spark with some slicing drives through the American defense. She was able to convert some tough, contested layups and finished the contest with 12 points and two assists.

The Bison entered halftime leading 29-22. The American defense stifling league-leading scorer Claire DeBoer ’17 did not get her first points on the board until 24 minutes in, when she hit a 3-pointer. But once the Patriot League Player of the Year broke the ice, she carried her team to the victory. After two monster offensive rebounds from Catherine Romaine ’18, DeBoer received the kick-out on the perimeter and drove through the frazzled defense to score an easy layup, which extended the lead to 15, the largest of the night for the Bison. DeBoer rallied to finish with a game-high 14 points to go along with 10 rebounds.

“It’s tournament time,” DeBoer said. “It doesn’t really matter how much you score. We just want to win and that’s all that really matters right now, and I thought everyone really stepped up today. It was a really great team effort.”

Kaitlyn Slagus ’19 had a strong showing as well, ending just one rebound short of a double-double for the Orange and Blue with 12 points. Sune Swart ’17 also challenged American’s defense with her strong post play, tallying 13 points and six rebounds in the win.

American hit a breakaway buzzer-beater layup to cut the lead to 47-38 at the end of the third quarter and pulled within six points early in the fourth. However, they never captured the lead, as the Bison managed to pull away every time the Eagles threatened. After getting fouled on a pivotal defensive rebound, Kate Walker ’19 hit one of two from the line to restore the double-digit lead at 59-49. DeBoer essentially sealed the deal by converting an and-one to bring the lead to 13 with two minutes to play.

The Orange and Blue secured the win by hitting their free throws down the stretch, finishing 14-16 from the line in the game. The win marked the team’s 26th win this season, marking the highest number of season victories in program history. They also extended their home winning streak to 27 games, tied for the second-longest active streak in the NCAA.

“Being the one seed was huge for us; being able to bring this final four to Lewisburg has been great. We love our fans and we love being in Sojka. This is more than we could’ve asked for, so we hope we can cap it off with a win,” Megan McGurk ’17 said.

The Bison will look to break that tie in the championship game against Navy on March 12 at 11 a.m. in Sojka Pavilion. It is the first time in the league’s 27-year history that the University will host the championship matchup.

With a win, the Orange and Blue earn an automatic bid to the NCAA Championship Tournament. The championship game will be televised on CBS Sports Network.