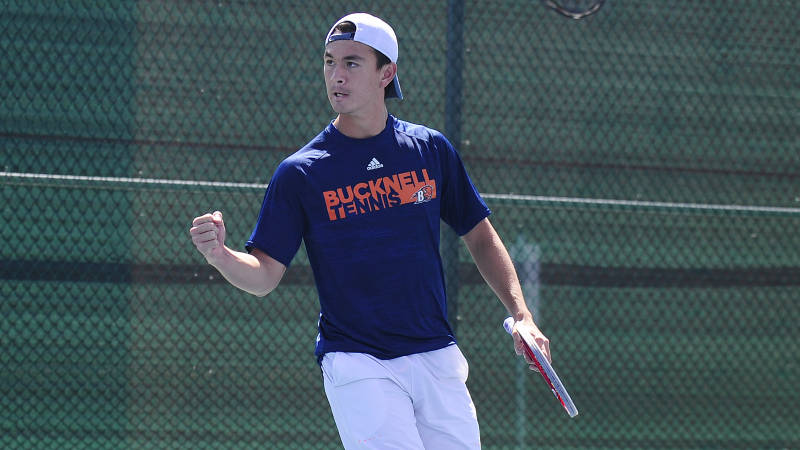 The Bison tennis teams were back in action this past weekend, with the men facing Navy and Lafayette on April 8 and 9, respectively, while the women challenged Lafayette and Towson on April 9 and 11, respectively.

First up for the men was Navy, who defeated the Orange and Blue 5-2 on April 8. In a matchup of All-Patriot League players, Daniel Wright ’18 defeated Navy’s Thomas Pecor in straight sets to improve to 2-0 in the conference. Adding another victory to the Bison’s record was Ben Gerber ’18, who won his match 7-6. Joining forces, Wright and Gerber tallied the only doubles win of the day, prevailing for a score of 6-4.

The men’s team shutout Lafayette 7-0 on April 9, improving their record to 9-15 overall and 3-2 in the Patriot League. Max Kane ’18 succeeded in beating his opponent in the lone three-set win of the day. Following Kane with wins were Bryan Adams ’17, Max McDonald ’19, Gerber, Colin Sacco ’20, and Max Haase ’19.

The Bison also swept the Leopards 3-0 in the doubles matches. The three victories included performances by the pairs of Andrei Vitiuc ’19 and Gerber, Kane and Haase, and Adams and Sacco.

“It was a long weekend with back-to-back matches. It really shows how fit we are as a team to go out and bounce back after losing a tight match to Navy and then coming out and sweeping Lafayette,” Gerber said. The Bison will look to continue their momentum in league play on April 15 at Colgate.

On the women’s side, the Orange and Blue defeated visiting Lafayette 6-1 on April 9. Both Michele Urbinati ’17 and Jill Auteri ’20 won with three sets. Other individual winners included Paige Leavy ’20, Emilie Bush ’18, and Danielle Gannon ’19. The Bison also came out on top in all three doubles contests of the day. Gannon was very satisfied with the team’s outcome against the Leopards, as the Bison’s record improved 2-3 in the Patriot League.

“Everyone really came together for our win over Lafayette; it was a great day of play,” Gannon said.

In a break from conference play on April 11, the women fell 0-5 to Towson University. Their record dropped to 10-8 overall with the loss. The team will return to action when they host Villanova on April 18 at 3 p.m., looking to bounce back and gain a non-conference victory.