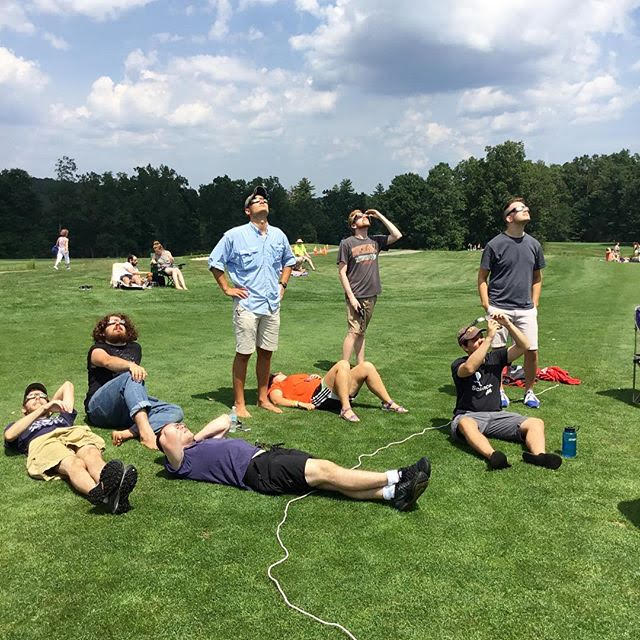 When the highly anticipated solar eclipse passed over the United States on Aug. 21, University students, faculty, and staff were ready. Various spots on campus were filled with eclipse glasses, outside lectures, and Snapchat filters showcasing the lunar phenomenon. Many people were eager to participate in this rare and historical event, as the next eclipse visible to the United States will not be until April 8, 2024. Lewisburg, Pa. was able to see the moon covering 75 percent of the sun at approximately 2:40 p.m.

A team of students took advantage of the eclipse and embarked on a four-day camping trip, led by Professor of Physics Ned Ladd, to Cumberland Mountain State Park in Crossville, Tenn., where they would be able to see the eclipse in full totality.

Physics research student Payton Johnson ’19 was responsible for planning the logistics of the trip and setting up the equipment over the summer.

The group built a research station in the middle of a golf course located an 11 hour-drive away from campus, which allowed the students to have an open space to look at the eclipse. They used scientific instruments in order to test their theory, which is based on the heating of the corona, a filamentary halo around the sun that is only visible during totality.

“Our data on the brightness oscillations in the corona look very good. We will need to analyze the dataset more closely before we can be sure we have interesting results, but at first glance, the images look promising,” Ladd said.

Totality lasted for only two and a half minutes at their campsite, but the research team took detailed observations during that time.

“The experience of totality is nothing short of awesome. When the moon finally covered the sun’s photosphere, and the corona emerged in a darkened sky, we were all stunned,” Ladd said.

“Overall a 1000/10 experience; I would recommend it to anyone in a heartbeat,” Johnson said.

The team has since returned to campus to analyze their data. This first-hand experience will allow them to extensively share what they have learned and contribute to the astronomical and scientific fields at the University.