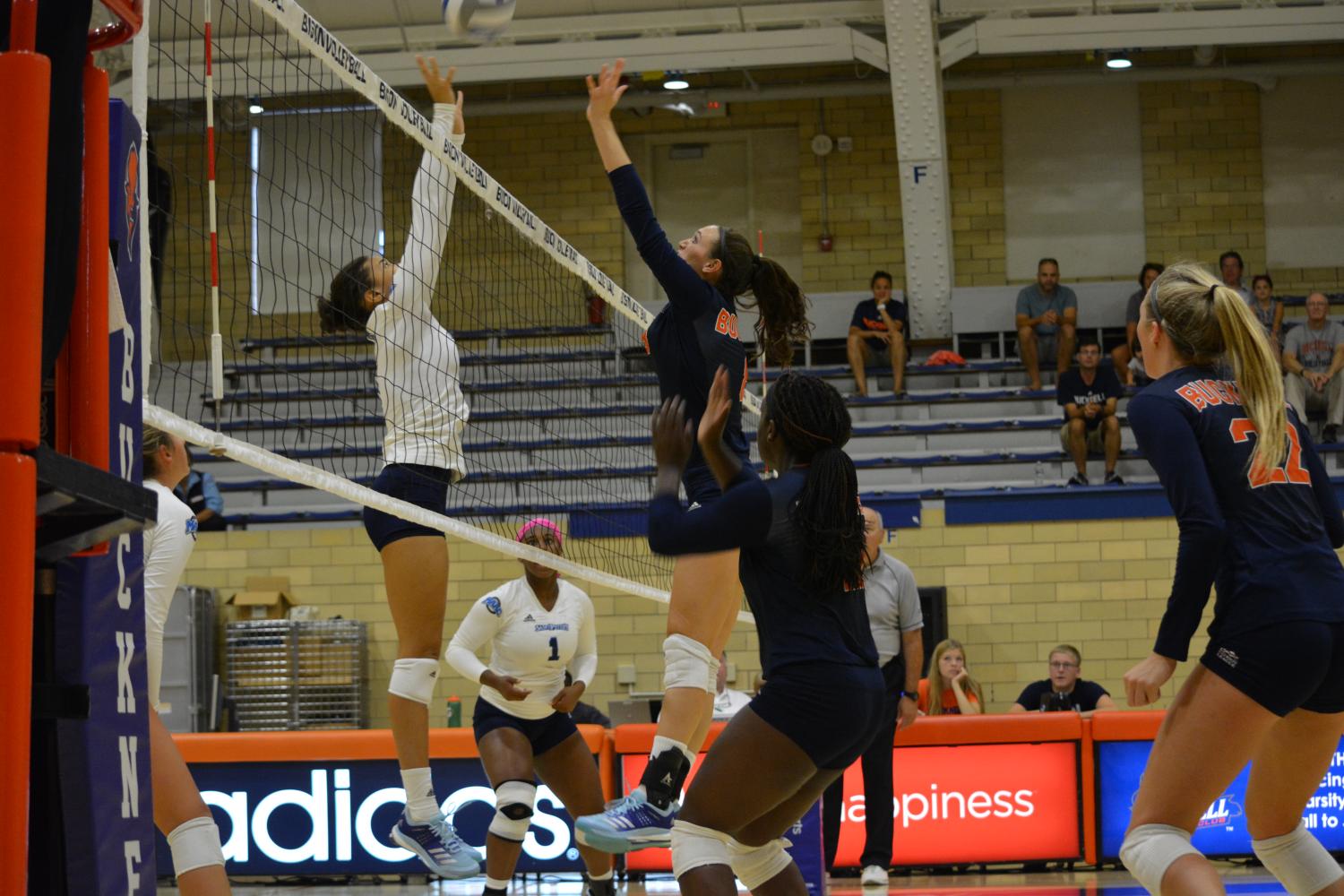 Bison volleyball kicked off their regular season last weekend, hosting the Bucknell Invitational in Davis Gym, where they finished undefeated in their opening tournament. They faced off against La Salle, Iona, and Saint Peter’s, beating all three.

In the opening match against La Salle, the Orange and Blue came back after trailing 1-2 and earned a five-set victory. Sophie Bullard ’20 went double-double with 19 kills and 11 digs in the game. Blake Buchholz ’19 joined Bullard in the double digits with 14 kills. Mimi Richards ’20 also contributed to the win with nine kills.

The Bison were dominant in the second set, trailing for only one serve. The defensive effort was strong throughout the match for the Orange and Blue. Libero Brooke Stark ’20 led the way on defense with 21 digs.

On the second day of the invitational, the Orange and Blue came back from a 0-2 deficit for a 3-2 win over Iona. They battled during the final set, overcoming a 11-14 deficit to win the set 17-15 and securing the match victory.

Bullard and Celeste Barker ’18 had the final two kills, assisted by Luz Nagle ’18. Bullard recorded another double-double, with 17 kills and 16 digs in the match, while Buchholz also recorded a double-double with 11 kills and 18 digs. This marked the first 2-0 start for Bison volleyball since 2012.

“We are mentally tough enough to come from behind and win sets,” Buchholz said, which was especially evident in the final set against Iona.

The Bison continued on their winning streak for the weekend and improved their undefeated record to 3-0 with a win against Saint Peter’s. It was the first clean sweep of the weekend. Nagle led the team with 24 assists as well as five kills and no errors on seven attacks. Bullard recorded her third straight double-double with 10 kills and 11 digs.

After the final match, Bullard was named the tournament MVP, thanks to her 46 kills and 38 digs on the weekend. She was joined by teammate Mimi Richards ’20 on the seven-player All-Tournament Team.

“This weekend was a great start to our season, the best start Bucknell volleyball has seen in over a decade. This year we are emphasizing teamwork and competing as one unit, whether you are on the court or cheering from the sideline,” Lindsey Baker ’19 said. Her teammates echoed their satisfaction with the team’s performance in the Invitational.

“This past weekend was some of the best volleyball my team has played during my time here and we’re just getting started,” Buchholz said.

The Orange and Blue will travel to Stetson for the Hatter Classic Sept.3-5, looking to continue the undefeated season.