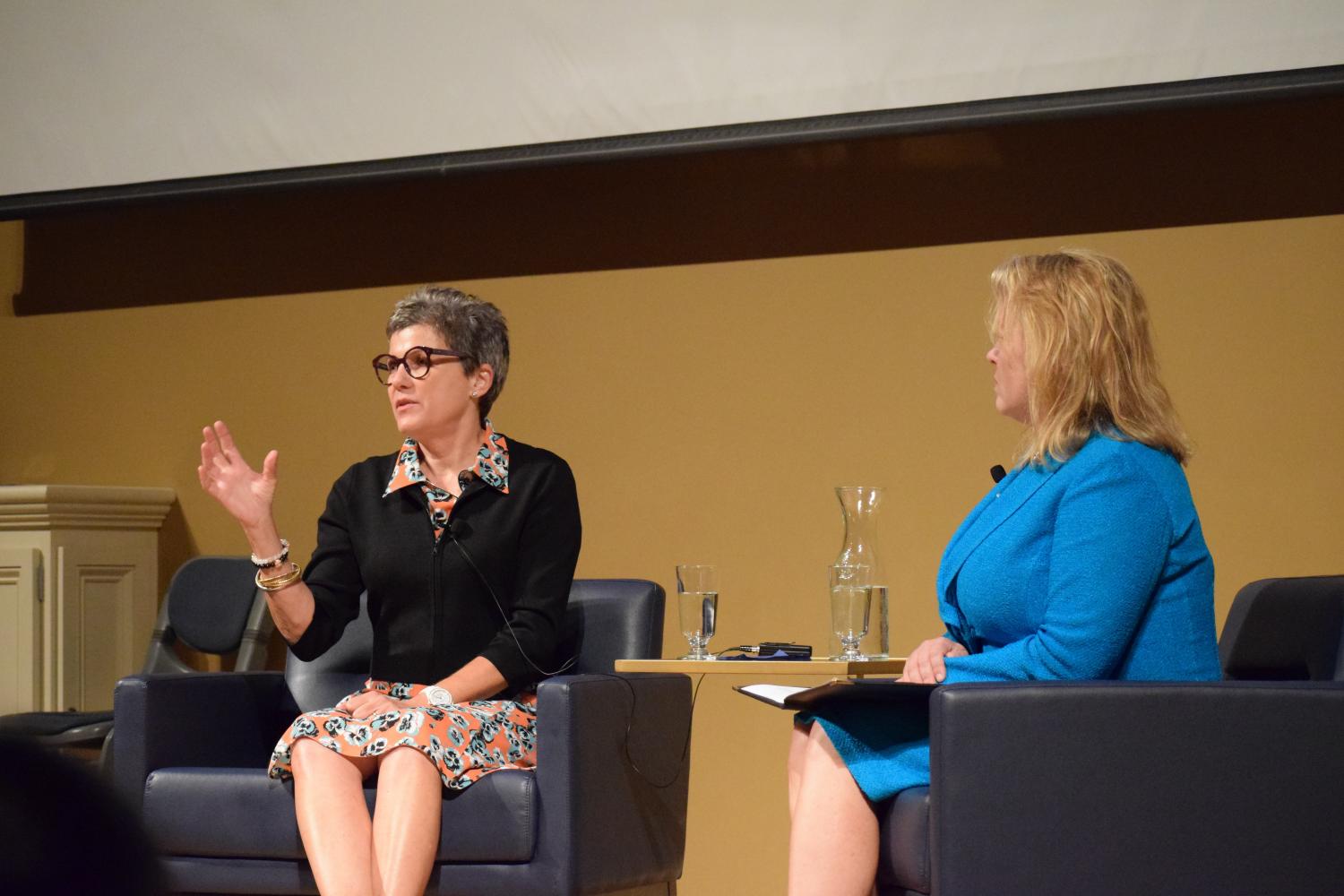 “Being able to get a global perspective is invaluable, no matter what you do,” Kathryn Vizas ’79 said to an auditorium of management students. “Business is global, and to understand business in different places is a really good skill to acquire.”

Vizas kicked off the College of Management’s 2017 Walling Speaker Series on Sept. 7 in speaking about social change through an international lens. An attorney and advocate who focuses on improving the lives of girls and women across the globe, Vizas studied biology at the University before earning a law degree at the University of Pennsylvania.

Sami Golaski ’18, an accounting and financial management major, introduced Vizas and explained that the lecture series is made possible by the Fitz Roy and Mary Jane Walling Management Endowment. The endowment, established by Fitz Roy ’46 and his wife Mary Jane in 2006, supports management education at the University, which includes funding for visiting speakers and lecturers.

After a brief video that showed Vizas’s work with Population Services International (PSI), Vizas and Dean of the College of Management Raquel Meyer Alexander began a discussion on her experience providing health services programs to girls and women, as well as her path to global service and use of social marketing to create change.

Vizas focused on PSI’s project in Uttar Pradesh, India, where low income women were screened for cervical cancer, a preventable and treatable disease if caught early.

PSI often uses social marketing to create change: preventative care is not commonly practiced by women in low income areas of India because of extensive hardships, including the fear of high medical costs. Vizas discussed how PSI used social marketing to begin spreading a culture in Uttar Pradesh where preventative medicine could be accepted. This effort increased the number of women the project could reach.

“We had to really step back about a year in [to the project] and do a reboot, go out, talk to the women, and find out what the barriers were … then target our messaging to overcome those barriers,” Vizas said. “One of the things that we did is we did not use the word cancer because it was so frightening to these women.”

While the project initially had a low number of participants, PSI has now screened over 120,000 women.

“You can learn from failure, I’m happy to say. And one of the things that PSI wants to do as we go forward is to take more risks, understanding that there may be failures,” Vizas said.

Vizas shared some of the “secret ingredients” for success, which for her include “engaging in dialogue with customers … to understand what their means are, what makes it difficult for them to access your product, and how you can get rid of those barriers.”

Alexander pointed out that many students want to become “agents of positive change” from the start. Vizas explained her path to nonprofit work, as well as other paths students can take to find a career that helps people worldwide. Vizas briefly discussed her own experience at the University between 1975 and 1979, laughing while she recounted University concerts headlined by Bruce Springsteen and Billy Joel.

The discussion ended in a Q&A session open to first-year management students enrolled in MGMT 100 and their upperclassmen advisers.

“It is truly special to hear from other people who went to this school, and what they did after college,” Emily Gorham ’21 said, reflecting on the lecture. “Hearing that [Vizas] worked in a law career for more than two decades really helped me realize that you can really base your life off of your passions, and what you major in does not define you, but only helps you.”