Letter to the editor: Dispelling myths about sexual assault

We write in response to the 9/14 opinion piece regarding combating biases in the hope to clarify some points about Title IX, the Dear Colleague Letter, and prevention and education on campus. Speak UP strives and hopes for informed change with respect to the Dear Colleague Letter and that the evolution of its influence is guided by informed decisions and thorough research that defends the rights of all students. As it stood in 2011, the DCL has definitive specifications for investigation; there are testaments to the importance and necessity of equitability throughout the DCL. It requires “Adequate, reliable, and impartial investigation of complaints, including the opportunity for both parties to present witnesses and other evidence”. Both the victim-survivor and the accused, who Bucknell calls the Respondent, are given equal voices and opportunities throughout the investigative and hearing process. Additionally, as Bucknellians, both parties are eligible for the services of on- and off-campus resources. Please see the chart of confidential and additional resources below.

There are a plethora of reasons as to why the internal investigation system within a university, particularly our university, is different than that of the criminal justice system. The biggest facets include circumventing financial intimidation, avoiding retraumatization to all parties, a different burden of proof, and the subsequent potential consequences for the accused.

The burden of proof used in university conduct hearings (of any kind; sexual misconduct or other violations of the code of conduct) differs from the one used in the US criminal justice system, because the two systems have different purposes and outcomes. In our system, the requirement is the “preponderance of the evidence” which loosely translates to “more likely than not”. In criminal court, the standard is beyond a reasonable doubt. The high standard of evidence in criminal court is due in part to the proportionally large risk of repercussions when someone is proven guilty: a person’s loss of liberty is at stake.

Within presentations and other on-campus activities, Speak UP does not dispute that the accused should also receive a fair and impartial hearing. The organization exists to spread awareness; specifically with regard to this topic, Speak UP highlights that rates of false accusations are much lower than most people believe. By the same token, rates of unreported sexual violence are higher than most people believe (RAINN 2016). Finally, Speak UP’s main charge is to transform campus culture through prevention and education, not to alter our sexual misconduct adjudication system.

The activity referenced in The Bucknellian article, “Combating bias is necessary in fight against sexual misconduct” is called “Myth vs Fact” and encourages the audience to pick apart societal assertions and stereotypes about sexual assault. The activity seeks to dispel myths that have a negative effect on our ability to recognize a situation as unsafe or inappropriate. The myth vs fact statement in question reads, “False reports are common”. Speak UP Peer Educators then help the audience assess the reality about this statement and discuss that only 2-8% of reports of sexual assault are false or unfounded[1]. The activity brings to light the importance of engaging with any preexisting biases we might have with regard to each facet of the identity of both the victim-survivor and the perpetrator. The existence of false reports does not devalue or delegitimize the overwhelming number of founded sexual assault and misconduct claims. This 2-10% margin of false or unfounded allegations does not make them any more relevant or common than false reports of other felony crimes such as robbery and grand larceny, which have similar rates.

If a person believes that false reports are common, they compromise their ability to fully and honestly support a survivor who shares their story with them. By shedding light on the reality that false reports on not common, Speak UP encourages students to believe survivors. Students can then use the ABC’s to acknowledge, believe, and check in with survivors who share their stories. This is so important and stressed in the workshop because, more often than not, the first person a victim-survivor comes to to tell their story is a friend.[2] This means that we all must be educated on how to respond to an individual who has experienced something traumatic.  It is also extremely important to let a survivor know you believe them when they first approach you because negative experiences in this moment can heighten the traumatic feelings and significantly delay the survivor’s healing process[3]. In reality, we all have different experiences with people on either side of this issue, but we must acknowledge that our personal experiences, no matter how extensive or impactful, reflect only a tiny slice of the realities of this issue, whether at a university of 3600 students or within a nation of 300 million people. This cartoon acts as a good example of these types of situations: 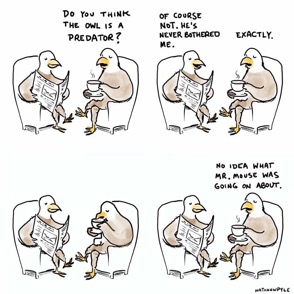 Because sexual assault is the most underreported crime, it may be easier to lean into anecdotal evidence of false allegations. The hearing process outlined in the DCL and that Bucknell utilizes can only address reported sexual assaults. Because someone confiding in a friend is not the same as reporting it, the rumor mill has a tendency to propagate stories of false allegations more so than they exist in reality. For every 1,000 rapes, only 310 rapes are reported to police, and only 6 rapists will be incarcerated. Compare this to the statistics for other crimes: for every 1,000 robberies, 619 cases are reported to police and 20 robbers will be incarcerated. For every 1,000 assault and battery crimes, 627 cases are reported, and 33 criminals will be incarcerated. According to the Rape, Abuse & Incest National Network, for every 1,000 rapes, 994 perpetrators walk free. These statistics were gathered within the past year, and stem from a reputed national source on the incidence of sexual violence. The fact of the matter is, as students, we do not hear about the many cases that land on the Title IX Coordinator’s desk. But, as many are so brutally aware, the problem of sexual violence exists on this campus and affects our students. Because we know sexual assault is vastly underreported, it is impossible to get an accurate number of just how many stories are going unreported here which only elevates the potential for a report to be true as the university and Speak UP endeavors to create a climate where students feel empowered to come forward about their sexual assault.

It is important, as college undergraduates, to recognize our personal biases and to try to tease out the truth, no matter our personal beliefs. Speak UP will continue to dispel myths about sexual assault and encourage members of the Bucknell community to come forward with their stories.