A salute to ROTC 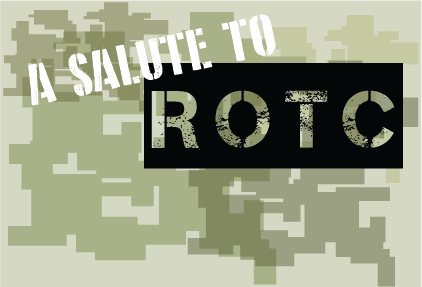 Reserve Officers’ Training Corps (ROTC) programs nationwide are hosts to some of the most dedicated, hard-working, and diligent leaders. In 1862, the Bucknell Guard was formed and during the Korean War, the University petitioned the Department of Defense to establish an official Army ROTC unit on campus. After the unit’s establishment in 1951, the first officer was commissioned in 1952.

The Bison Battalion is an organization comprised of the University and four other schools: Susquehanna University, Bloomsburg University, Lycoming College, and Pennsylvania College of Technology.

The Bison Battalion has earned the prestigious MacArthur Award on numerous occasions — an award instituted in 1989 to honor the top Army ROTC units across the country. The Bison Battalion first received recognition as the best small-school ROTC program in the Eastern United States in 1990 and most recently in 2005.

Students decide to join ROTC for a variety of reasons. For many, it is their sense of responsibility to serve their country or their own desire to challenge themselves.

Ike Lanier ’19 aspires to serve Active Duty as a Quartermaster, which involves providing food, water, fuel, and general supplies to forward line units and building up infrastructure behind the front lines.

“I think that American citizens experience a lot of rights and liberties that many throughout the world do not have access too. I am not saying that our country is perfect, and I recognize that we have a lot to work on, but I think people sometimes forget that our circumstances could be much worse.” Lanier said.

“There are many places where criticizing the government for its policy or disagreeing with authoritative figures would not go over well. Because I view these things as special, I think it is not only important to defend them for myself and others, but to also know that I have earned the right to exercise them,” he said.

Lanier explained his sense of duty stems from “our government and all the people who have put in the countless hours, both today and in the past.” As a result of this, Lanier says that serving deserves “my time and work as repayment for what [others] have done for me.”

Others members of the Bison Battalion have familial history with the Armed Forces.

“I also would like to give back to my country for all the opportunities I have been given. Without the men and women who serve our country, we would not be able to lead the lives we do. I want to give others the chance to have the same opportunities and experiences I have had in my life. Becoming a commissioned officer will allow me to do that,” Boyd said.

Usually, ROTC students begin research into different branches in their MSIII year, or their junior year. Branches are awarded based on an Order of Merit List of all cadets who are commissioning that year. The order of the list is determined by GPA, major, extra curricular activities, participation with ROTC, etc.

The ROTC program attracts males and females, alike. In 2008, the Battalion was recognized for training one of the top two female cadets in the country.

“I want to be a doctor, and the military is one of the best ways to access populations in war torn areas that need medical care,” Otto said.

A sense of belonging and friendship

Most can agree that their favorite aspect of the program is the strength of the friendships formed.

“My favorite aspect [of ROTC] are the friendships I have made in it. I have not felt closer to a group of people in my life. It is one thing to have a friend, but it is something else entirely to have a friend that you may have to go to war with someday,” Trey Tanner ’19 said of his training to become either an Infantry Officer or Combat Engineering Officer.

“ROTC has provided me with a deep sense of belonging and friendship, something I’ve been fortunate to experience during my transition to life here at Bucknell. I look forward to spending the next four years developing my leadership skills and being apart of this amazing program,” said Riley McDonnell ’21.

“We have some of the most amazing people in ROTC. People who I look up to as leaders, role models, and as amazing individuals in general. These people have supported me in my time here at Bucknell, and will continue to support me even after I leave campus. They have pushed me to be the best person I can be, both physically and academically,” Boyd said.

“My favorite part is the variety of challenges we have between planning events and missions and physical tasks,” Otto ’18 said.

“The hardest thing we had to do was our Field Training Exercise in the spring of 2017. It was freezing cold, I was awake for 58 hours with no sleep, and I was carrying fifty pounds of gear along with a fifteen pound Squad Automatic Weapon all weekend. It was also my favorite event we have done thus far in the program. The misery that you share with people oddly makes you look back on it fondly,” Tanner said.

Although ROTC students have a rigorous schedule in balancing academics with the demands of the program, they persevere knowing that the are working towards something unequivocal in significance: preserving the safety of our nation.