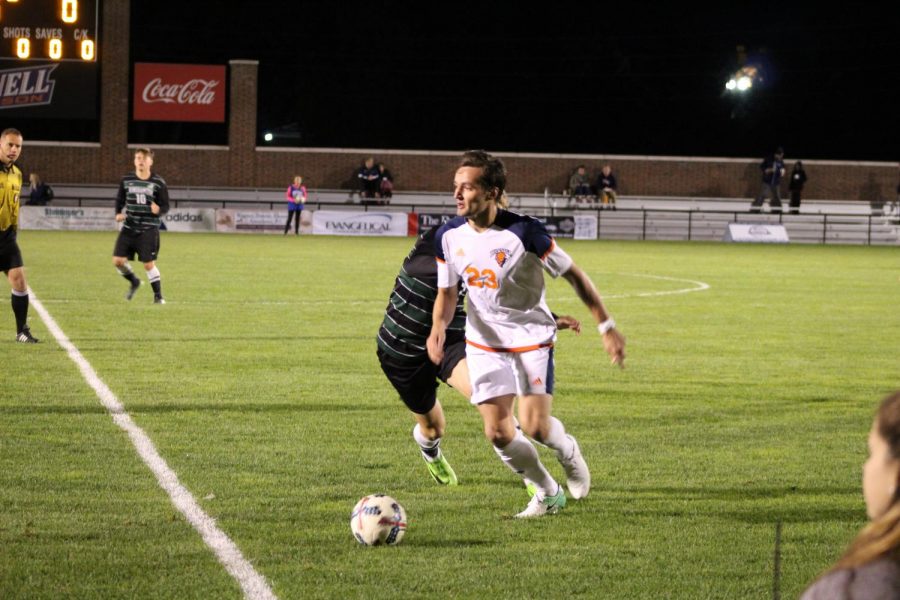 The men’s soccer team traveled to Hamilton, N.Y. on Oct. 14 to face Colgate in a conference match. The team lost 2-1, falling to 2-3-0 in Patriot League play. Later, on Oct. 14, the Bison again fell 2-1 in a non-conference game against Binghamton.

After battling for the first 45 mins, the Bison and the Raiders stood scoreless going into the second half. Taking 13 shots in the second half, the Orange and Blue pushed the tempo as they were awarded multiple opportunities to strike first. The team’s persistence payed off with 22:07 remaining after a blocked shot resulted in a Nick King ’20 rebound. This was King’s fourth goal of the 2017 season.

Just 44 seconds after the first goal, the Raiders equalized the score when a penalty kick was successfully taken. Colgate then capitalized on the momentum and scored again, 48 seconds later, taking the lead.

For the remainder of the contest, the Bison attempted to fight their way back. One great chance came from Quinn Bredin ’20 who headed the ball, only to be saved by the opposing goalie.

In terms of statistics, the two teams finished fairly evenly, Colgate concluding the match with a 15-14 shot advantage and 6-4 save advantage. Ryan Ott ’19 started in goal for the Bison and went on to make six saves.

“We’ve hit a stretch during this season where we are going out each game and competing, but the results haven’t gone our way.  Against Colgate, we struggled to hold the lead and we paid the price.  With that said, we have a lot of confidence in each other, and for the four games left in the Patriot League season, we look to take it one game at a time”, Ott said.

Three days later, the Orange and Blue returned to Emmitt Field to face Binghamton, ultimately losing 2-1; however, the statistics clearly illustrate the Bison’s dominating presence throughout the contest, finishing with a 19-8 shot advantage and 11 corner kicks to Binghamton’s five.

Matt Thorsheim ’21 scored in the 64th minute, for his third goal of the season. After a quick restart, the ball was sent into the box and headed by an opposing player only for Thorsheim to tap the ball over the line in a composed manner.

Binghamton scored the game winner after pressuring the Bison and converting on a free kick. Thorsheim and Danny Hallowell ’20 finished with a team leading four shots.

“It was a disappointing loss. We got pretty unlucky with their first goal, and we hit the post a couple times. With 18 shots and 11 corners, only one goal is not acceptable and we know that going forward we need to capitalize more on our chances if we are going to have a chance of going to the playoffs.” Hallowell said.

Sitting in seventh place in the Patriot League, the men will look to improve their position when they play Army at home on Oct. 21 at 5 p.m.