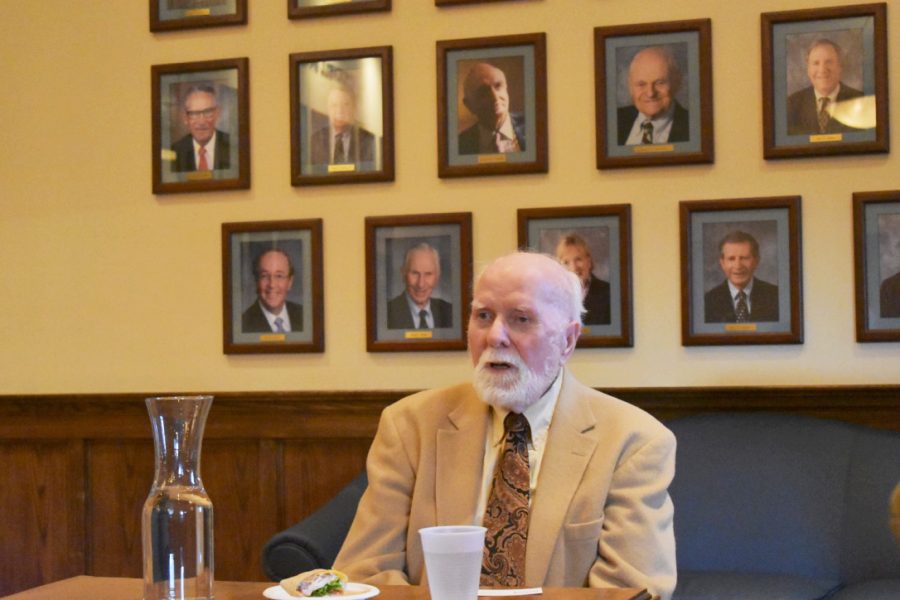 Thirty years ago, Reverend Walt Everett was eating at a diner with friends when he received a phone call. On the other end of the line, his youngest son asked if Everett was sitting down. Everett lied and said he was. He was then told that his oldest son, Scott, had been murdered.

On Oct. 17 at 5 p.m., Everett spoke in the Traditional Reading Room of Bertrand Library to an audience of the University’s students and faculty members. Reverend Doctor John Patrick Colatch introduced Everett as a “longtime voice for social justice in Union County.” In his talk, Everett discussed his loss and the healing power of forgiveness.

Everett lost his 24 year-old son, Scott, in July 1987 when he was shot by a neighbor. He eventually argued for the release of his son’s killer, Mike Carlucci, from prison and the two men have built a relationship of recovery and support that continues to this day.

After receiving the news of the murder of his son, Everett’s friends purchased him a plane ticket home. While seated in first class for the first time in his life, Everett talked and cried with the flight attendant. She sat with him for the entirety of the flight and “did just what you ought to do in that situation – she listened and she didn’t try to tell me it was ok,” Everett said.

Walt soon found himself struggling to release the rage he held from losing his son; however, he discovered the first of many steps of forgiveness when Carlucci apologized during his sentencing hearing.

“When he said ‘I’m sorry,’ I felt the nudge from God and he said, ‘this is what you’ve been waiting for,’” Everett said.

This “nudge from God” led him to write a letter to Carlucci while he was in prison on the first anniversary of Scott’s death. Everett concluded his letter by stating that he had forgiven Carlucci.

“The night I read your letter,” Carlucci wrote back, “was the first good night’s sleep I’ve had since I’ve gotten to prison.”

Everett went on to visit Carlucci periodically and eventually testified before the parole board in support of Carlucci’s early release from prison. This release was granted and the two men have since become friends. They speak together at prisons and religious gatherings on the topic of forgiveness and prison reform. Carlucci has been a supervisor for a truck company for over twenty years and conducts Alcoholics Anonymous and Narcotics Anonymous meetings. Everett officiated Carlucci’s wedding and the two have become an inspiring tale of forgiveness to many.

“What really stuck out was how Walt discussed forgiveness as a process instead of something you do once. It answers the question of how he could even talk to the guy who killed his son,” Cynthia Filpo Diaz ’18 said.

In 1994, the two men were interviewed on the Today Show by Matt Lauer. At the conclusion of the interview, Lauer asked Carlucci what he saw when he looked at Everett, the man whose son he murdered. Carlucci turned to Everett and simply answered, “unconditional love.”