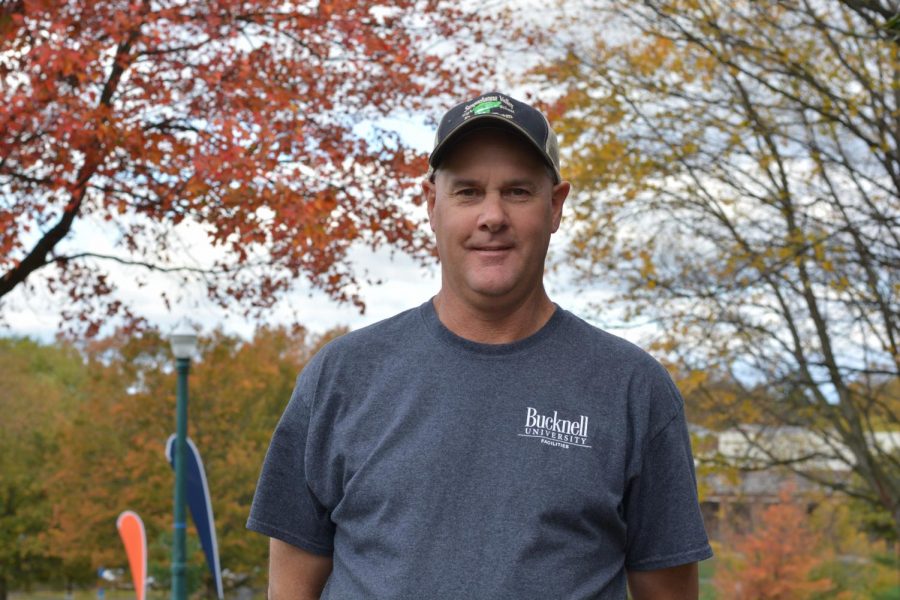 18 years ago, Facilities member Tom Prowant took the reigns of the Susquehanna Valley Fishing Team, a competitive bass fishing program that teaches 11-18 year olds in the area how to fish. Since his program’s inception, Prowant has sent students onto collegiate bass fishing teams and has financed multiple collegiate fishing scholarships. One such recipient, Brent Engelman, who will attend Grove City College, visited the University on Oct. 20 for a dedication ceremony. Engelman’s scholarship was generously funded through contributions made by University Facilities staff on behalf of Prowant’s mother, who passed away earlier this year.

Prowant has worked at the University for nearly two years as a custodian in the Olin and Rooke Biology buildings. Born and raised in the Susquehanna Valley area, he started fishing at just five years old.

“I’ve been around fishing all my life and just have an absolute passion for the sport of fishing,” Prowant said.

Prowant got into tournament fishing in the late 1980s. Around this time, he joined as a member of the Pennsylvania B.A.S.S. Federation. When the director of the district’s youth fishing program changed jobs, Prowant stepped into his current role.

The fishing team is a regional program, with nine high schools currently represented. Some kids join who have never been fishing. Prowant often starts his trainees from scratch, teaching beginners how to cast, run boats, and water safety practices because a day in tournament fishing is completely unpredictable.

“You have to teach them how pay attention to their surroundings and respond to what’s happening. Sometimes the fish don’t want to bite; those are the days that are great teachable moments,” Prowant said.

“For Tom, fishing with the kids is much more than catching fish. It’s about life and the skills they’ll take from it,” Operations Area Supervisor Mary Schramm, who works with Prowant on center campus said. “Fishing is planning and learning, changing course when where you are isn’t working, patience and teamwork. Tom teaches all those things.”

The “ultimate prize” of Prowant’s teaching career came in 2014, when he took two boys from Mifflinburg, Pa. to the Collegiate B.A.S.S. Fishing Championship in Paris Landing, Tenn.

“It was a life changing experience for everyone involved,” Prowant said of the young men’s experiences, in which both competitors won brand new boats and received significant collegiate scholarships.

Prowant says that the relevance of his fishing program now is because of the rise of college fishing programs in the region and around the country. College fishing as a sport is about five years old, but has expanded significantly to the point where there are annual national championships. The fishing industry, itself, has seen tremendous growth.

Professor of management Douglas Allen’s son, Sam, participated in Prowant’s club, winning a state championship and getting to fish at the World Championship in Shreveport, La.

With a few exceptions, local programs are in their infancy, but that is changing.

“It’s more important now because of the collegiate fishing. Kids can actually get scholarships now to be on fishing teams,” Prowant said.

Prowant said he has been especially supported by his colleagues at the University, noting their contribution to Engelman’s scholarship after Prowant’s mother, Barbara, passed away in January. His custodial colleagues organized a fishing scholarship collection and made contributions to a fund in her name.

Despite growing opportunities, Prowant says that none of the local high schools, including Lewisburg High School, have shown an interest even in establishing club programs. It is this aspect of the sport that Prowant has found most frustrating as a coach.

“It’s a great thing for my program to be able to offer [a scholarship like] this for the kids who are graduating and heading off to college. It gives them a little more incentive to stay with my program,” Prowant said.

“Tom is an incredibly gifted fisherman who delights in sharing his craft with the youth of the Susquehanna Valley. He is extremely dedicated to the sport and his role as a mentor,” Allen said. “[Prowant] is as dedicated to helping youth develop their skills as he is helping them to develop their character.”