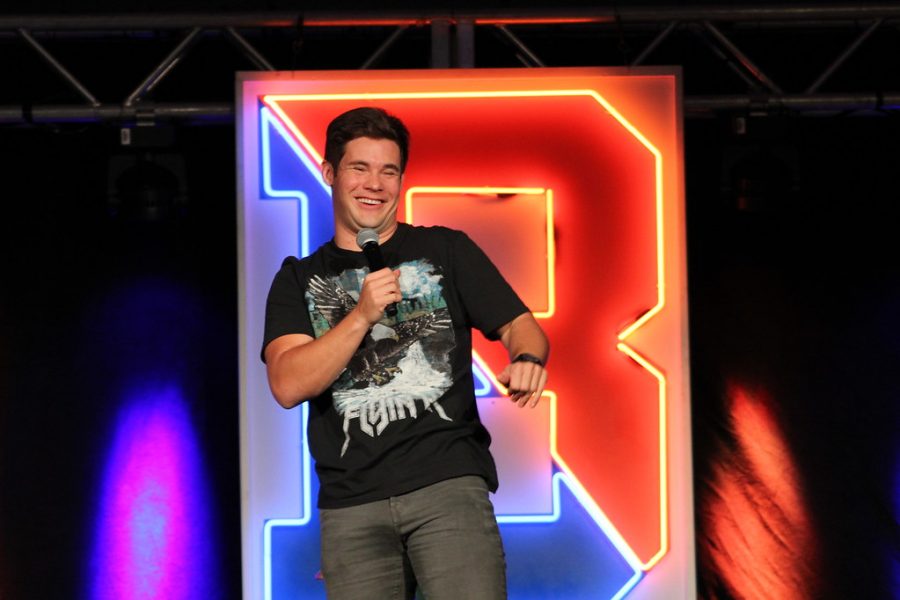 Courtesy of the Office of Communications

Comedic actor Adam DeVine was spotted numerous times on campus the afternoon of Nov. 3, having arrived early for his performance at the University’s annual Center Stage event. The event, which is usually held in early October, took place a few weeks later to kick off Homecoming Weekend. It was hosted by Activities & Campus Events (ACE) and took place in the large alumni tent in the football field parking lot.

Center Stage opened to students, staff, and alumni at 7:30 p.m. and, in addition to entertainment, featured delicious treats including s’mores, edible cookie dough on a stick, and soup in bread bowls.

“Bucknell students and alumni enjoyed the event. Everyone loved the food so much that the cookie dough ran out before Adam went on,” student event organizer Tara Harper ’20 said.

This year, ACE partnered with the University’s a capella groups—Beyond Unison, Two Past Midnight, The Offbeats, and The Silhouettes—to have them perform before the comedians.

At 8:40 p.m., stand-up comedian Sean Donnelly opened for DeVine. Donnelly has performed on “The Late Show” with David Letterman, “Conan,” and NBC’s “Last Comic Standing” in addition to guest starring on comedy series such as “Broad City.”

DeVine, the event’s main act, has been featured as both an actor and writer on Comedy Central’s “Workaholics” and as an actor in ABC’s “Modern Family” as well as in the 2012 film “Pitch Perfect” and it’s 2015 sequel.

“Adam was personable on and off the stage. Before the event he spent time on Market Street at a few local shops, like Amami. Then worked out and played basketball at the KLARC [Kenneth Langone Athletics & Recreation Center]. It was funny to watch students do a double-take as Adam worked out next to them,” Director of Campus Activities and Student Media Brent Papson said.

Heather Dawson, Assistant Director of Major Campus Engagements of the University’s Alumni Relations team, remarked that alumni appreciated the change of Center Stage to Homecoming Weekend this year, as it helped celebrate the success of the WE DO Campaign as well as allow “alumni who came in on Friday to mingle with students, enjoy s’mores, add listen to campus a capella groups.”