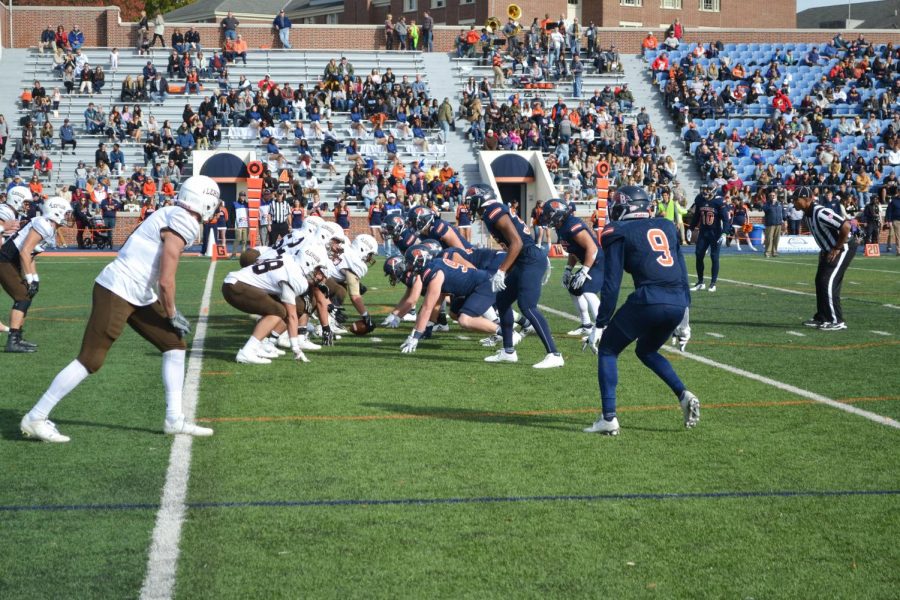 The Orange and Blue lost to Lehigh, 42-21, in the Nov. 4 homecoming football game at Christy Mathewson-Memorial Stadium. Running back Chad Freshnock ’20 rushed for a career-high 174 yards and scored three touchdowns, becoming the first Bison since 2014 to rush for three touchdowns in a contest. The loss brought the Bison to a 4-5 season record.

The Bison reduced the deficit to 28-14 at the 10:49 mark of the second quarter when Freshnock received a block from Andrew Podbielski ’18 and ran 23 yards for his second touchdown of the afternoon.

Lehigh responded with an eight-play, 75-yard touchdown drive to advance back up by three touchdowns. The Orange and Blue felt the effects of countless missed tackles and poor defensive coverage in the first half.

The teams combined for 457 yards of total offense in a fast-paced first half and 268 yards of total offense the rest of the game. Freshnock executed his third touchdown with a two-yard score to complete a seven-play, 73-yard drive in the fourth quarter. The Orange and Blue gained its highest season total of 342 offense yards this season, but could not convert enough touchdowns to secure a Homecoming victory. The Bison previously transcended 300 yards against Sacred Heart (318) and at Cornell (306).

Marcus Ademilola ’19 led all receivers with 48 yards, and Mark Pyles ’18 led the defense with ten tackles. Quarterback Matt Muh ’18 completed 22 of 37 passes in the contest.

The Bison will host Georgetown in their last home game of the season on Nov. 11 at 12 p.m. Before the game, they will celebrate their senior players.