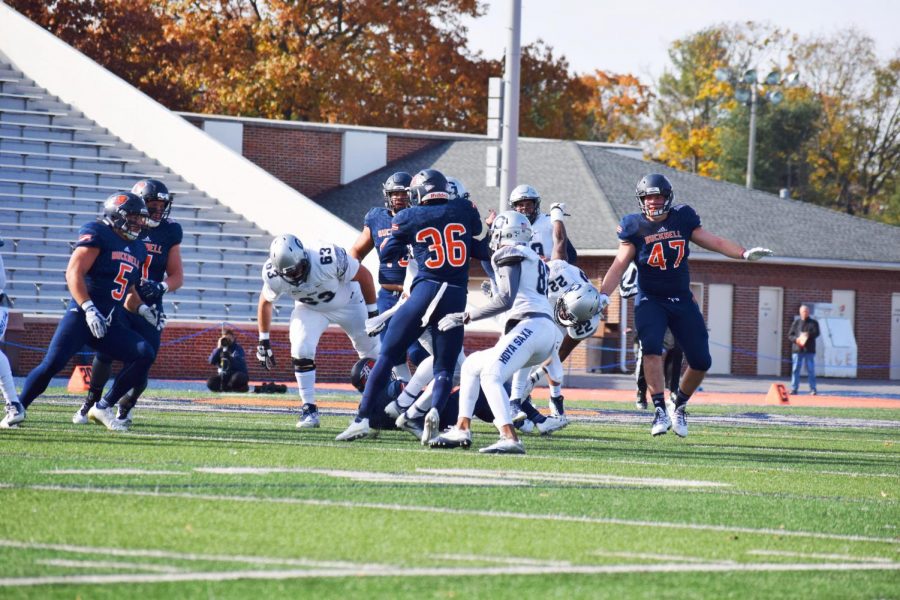 The Bison football team beat Georgetown 12-0 on Nov. 11 at Christy Mathewson-Memorial Stadium for their first shutout victory in over two years. The Orange and Blue recognized 19 senior players for their Senior Day before the game and wore special helmet decals to honor the 28th Infantry Division on Veterans Day.

“I will never forget the last time we played as brothers at Christy Mathewson-Memorial Stadium. It was a great Senior Day victory led by strong defense and timely scoring from the offense and special teams,” John Burdick ’18 said.

In the first half, the Bison and Hoyas only had 11 first downs and 282 total offensive yards combined. With 3:35 left in the half, the Bison started to make some progress, as they recovered a fumbled punt return in the red zone. Tom Adams ’18 forced the ball loose on the Hoya 19-yard line and Brice Sydnor ’19 recovered, giving the offense a short field.

The Orange and Blue were able to make it to the Hoya eight-yard line but had to settle for a field goal after a pass from John Chiarolanzio ’20 to Alan Butler ’19 was disrupted by the Georgetown defense. Burdick missed the 36-yard field goal, and the teams entered halftime scoreless.

However, Burdick made up for this in the third quarter with two field goals to put the Bison at a 6-0 lead. Chiarolanzio then worked with Marcus Ademilola ’19 for a 36-yard touchdown with only eight seconds left in the quarter.

The Orange and Blue held the Hoyas to just two first downs and a total of 23 offensive yards in the fourth quarter. The Bison took over the Georgetown eight-yard line after a punt with nine minutes left on the clock. They continued to run out the clock until 2:31 remained.

Georgetown fought hard to create some movement, but the Bison stopped any momentum. Trevor Fennimore ’18 had a crucial fourth-quarter sack for a six yard loss.

Offensively, the Bison had a strong performance, with Chiarolanzio completing 15 of 27 passes for 126 yards. Joey DeFloria ’18 and Chad Freshnock ’20 split the Bison’s carries, finishing with 97 and 78 yards, respectively.

Defensively, Colin Jonov ’18 led the team with nine tackles and Abdullah Anderson ’18 had two sacks for a loss of 12 yards. He now has 15.5 career sacks, needing just one more to make the Bison’s top 10 list.

“A win in the league was an important momentum boost for the team going into our last game against a strong opponent. The season hasn’t gone the way a lot of us planned, but we’re all working hard to leave Fordham on Saturday with a winning record and a sense of fulfillment for the seniors who have devoted so much over the past four years,” Fennimore said.

The season record for the Orange and Blue improved to 5-5 with the victory. The Bison will finish the 2017 season on Nov. 18 at Fordham, where they will look to win their first season finale since 2013.