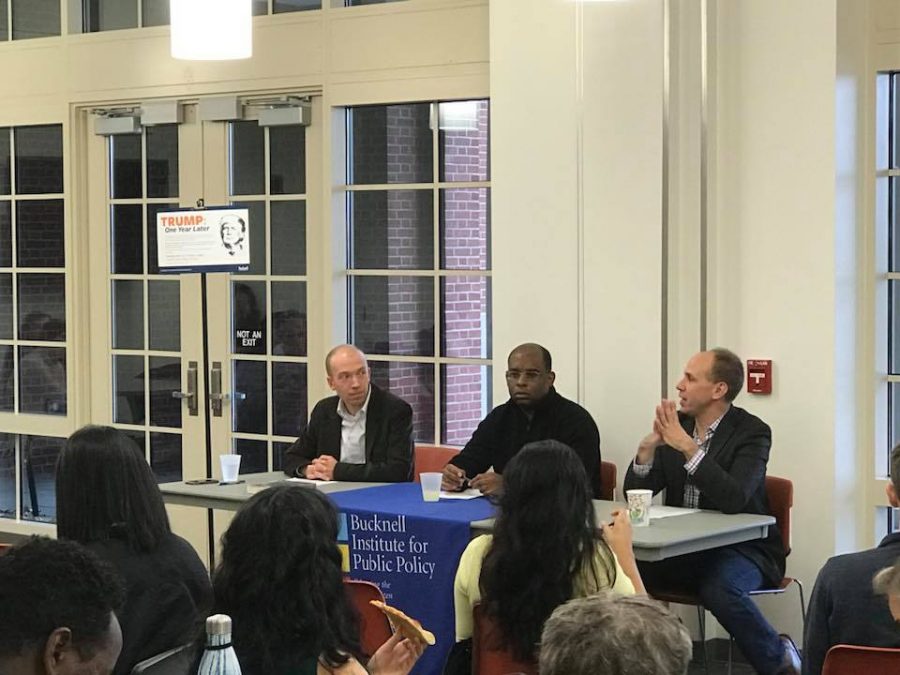 In light of one full year passing since the election of President Donald Trump, associate political science professors Chris Ellis, Scott Meinke, and David Mitchell held a forum on Nov. 14 to discuss the impacts that Trump’s presidency has had on American politics. The main question that prompted the discussion was: How has the presidency changed Trump and how has Trump changed the presidency? The forum was set up in the same way as the one held the morning immediately after the election last year. Ellis, Meinke, and Mitchell all shared their own perspectives, followed by a Q&A session with the audience.

Ellis began with an analysis of the public response to Trump’s first year in office, citing his low approval ratings as being “unprecedented” for a president this early in his term. Yet, he argued that, due to the current circumstances of the country, the gap between where Trump’s approval rating should be, and where it actually is, is even more considerable than the one between him and past presidents.

In terms of the future of American politics, Ellis painted two stories, one in which the Democratic resistance to Trump advances and one in which the era of negative partisanship advances. Ellis noted how Democrats “have become unusually energized” since the election, which could portend danger for the Republican party’s future, but also highlighted how people are now getting engaged in politics “not necessarily because they like what their side is doing but because they really hate what the other side is doing.” This recent state of negative partisanship has evolved due to a strong value polarization that is 30 years in the making, according to Ellis. He argues that people don’t care about the candidates as much as they care about specific issues that correspond with their values.

“The actual person on the ballot doesn’t matter as much as the team they’re playing for,” Ellis explained.

Meinke provided the disclaimer that his heavy critique on Trump was not based on ideology or partisanship but instead based on his “presidenting” abilities. He referenced a book entitled “Presidential Power and the Modern Presidents” by Richard Neustadt to establish his criteria for what makes a president successful. Meinke stated, per Neustadt’s book, that presidential power doesn’t stem from formal power, such as vetoes or executive orders, but from informal power, particularly the power to persuade.

“By Newstat’s standards, Trump is really terrible at being president,” Meinke said, citing his relatively poor reputation within Washington and beyond

Mitchell focused heavily on Trump’s foreign policy, or lack thereof. Mitchell argued that Trump’s actions and messages within the international community do not fit into any traditional ideology and fail to form “a set of coherent beliefs used to guide policy.” He stressed how, although it is not unprecedented for a president to break with tradition or stray from policy protocol, there is usually a logic to this decision – which is what Trump seems to lack. This inconsistency has led to increasing international anxiety for U.S. allies, with whom the Trump administration seems to be losing their credibility, according to Mitchell.

“It is truly a unique experience to be attending college during such a transcendent time of our country’s political climate. The talk was useful in attending because it offered a variety of different takes from different angles on the Trump presidency, without dipping too much into partisan politics,” Dean Rizzo ’19 said.

“Hearing professors who are so knowledgeable and understand [politics] at such a high level, just hearing them talk about what’s going on in the world is really interesting for me,” Caleb Paasche ’20 said.