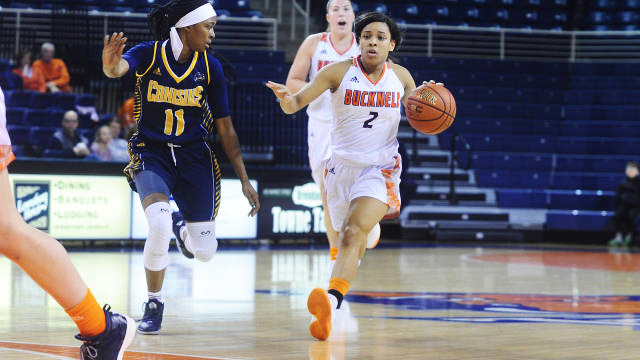 Courtesy of the Office of Athletics

Bison basketball season is finally back, and the women’s team is off to a 5-3 start. However, the Bison suffered their third loss of the season on Nov. 21, falling to St. Bonaventure in a game that saw the team scoring only five of the 30 three-point shots taken. However, the Bison’s shooting improved in their next game against Youngstown State on Nov. 24, the Orange and Blue clinching a 66-60 win.

On Nov. 26, the Bison outplayed Canisius for a 76-57 win. The offense put up a strong performance, with 10 players scoring in the contest. They also only had 11 turnovers in the game and recorded 17 offensive rebounds.

The Orange and Blue defense was impenetrable during this contest. Not only did they hold Canisius to 57 points, but they also forced 20 turnovers. Defense quickly turned to offense, as the Orange and Blue scored 28 points in transition off these turnovers.

In terms of individual performances, Kyi English ’19 continues to lead the team on the offensive end, notching 17 points in the win. She also recorded three steals on defense.

“I thought I played aggressive on offense and defense. I was able to drive, which drew a lot of attention to me and opened up my teammates,” English said. “As a team we played with great energy and moved the ball well on offense, which got us open looks at the basket.”

“For our next game against Binghamton, we expect to maintain the energy we played with against Canisius. Energy allows us to get open drives and shots and get stops on the defensive end,” English said.

This energy seemed to carry over from a road win at Youngstown State.

“I don’t know that there have been two more satisfying wins that I can remember over the past few years. They’ve really bought in to playing together,” Head Coach Aaron Roussell said.

The women’s third-straight win came Nov. 29 against Binghamton, 64-59. Kate Walker ’19 led the team with 18 points, and the bench had another strong contribution with 22 points combined. Romaine added 11 rebounds in the victory.

The Orange and Blue will next face Iona on the road on Dec. 3 to continue non-conference play before opening the Patriot League season against American on Dec. 29.