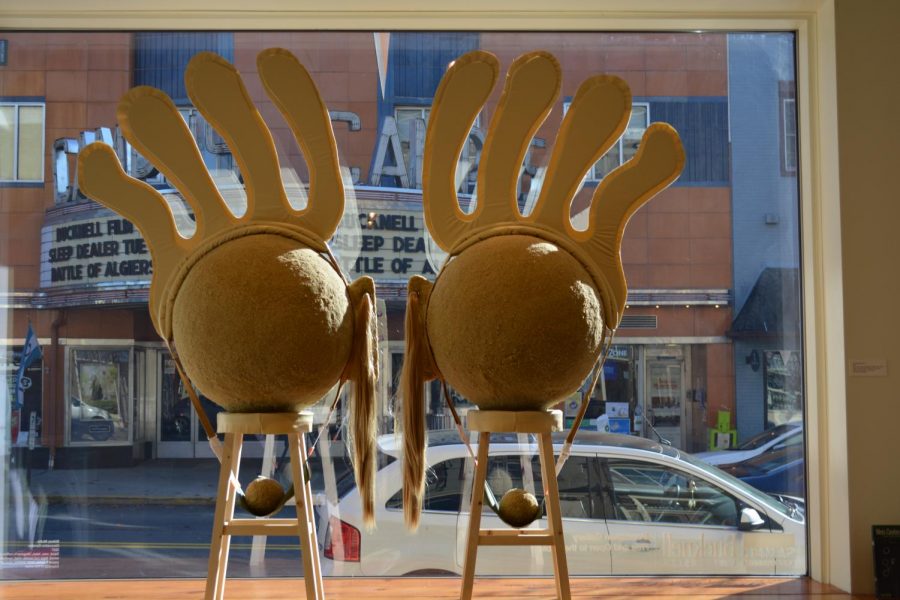 As people stroll down Market Street, many stop to stare at the artwork inside the window of the downtown Samek Gallery: a large breast-like sculpture. Capturing the awkwardness and discomfort brought about by puberty, artist Sidney Mullis playfully, and sometimes uncomfortably, explores social conventions of gender and coming-of-age in society today. The interactive exhibition, titled “Who is Puberty and How Does She Hit?,” went on display on Oct. 24 and will be open to the public until Feb. 11, 2018.

Mullis lives and works at State College, Pa. She recently taught classes in sculpture and 3D foundations at Pennsylvania State University. Her work has been exhibited in shows that take place everywhere from Tokyo to New York City. Her pieces in “Who is Puberty and How Does She Hit?” are composed of materials including wax, leather, and even, as the artist states, “balloons filled with bated breath.”

Director of the Samek Art Museum, Richard Rinehart, said that Mullis’ work is about one’s teenage years, not only learning to understand and accept one’s body but also as “a period when the lessons that you have been learning as a child about how to be a man or a woman get cemented into adult identity.”

This question of gendered identity is visible throughout the exhibition. In addition to the breast-like sculpture in the window, a large piece titled “Bra-ces, Bra-ces” stands in the center of the gallery. The piece suggests breasts enclosed in a white lace bra with protruding teeth encased in orthodonture.“Bra-ces, Bra-ces” denotes not only a sexual awkwardness but also a stark instability to the point that gallery guides warn visitors to be wary of the piece as it may tip over.

Additionally, Mullis dives into questions of social media and youth. In one of her interactive works, “Foundation,” the artist invites viewers to pick up and read a small bright pink book containing poetry “appropriate from YouTube videos of young girls providing makeup tutorials for online audiences.” The book is ordered by makeup product, from “Foundation” to “Lip Gloss.” The artist has selected videos based on their titles, such as “natural fourth grade makeup.”

Mullis further expands on the subject of youth and social media through a video and audio piece titled “Art Exhibit Couture by Caden Lavene.” In the makeup tutorial by the young YouTuber, Lavene creates a dramatic makeup look inspired by the artwork in “Who is Puberty and How Does She Hit?”

Samek docent Nicole Chaiko ’18 has spent many hours discussing and explaining the works of the exhibition to Samek viewers.

“This exhibition is really relevant and current in our society. Mullis’ work can provoke interesting conversations about gender in our society where new views on gender are developing” Chaiko said.

“I think Bucknell generally tends to have a black and white view of gender and this exhibition forces people to talk about gender as well as promote inclusivity” she said.