Meet the Managers: The faces behind the scenes of Bison Basketball 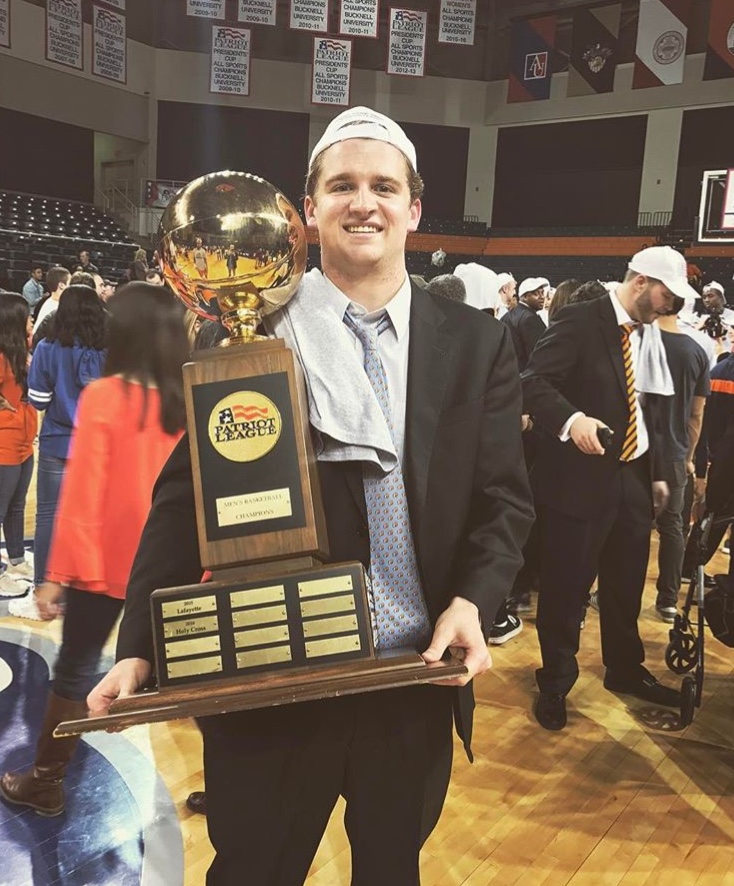 For Bison men’s basketball, it takes a team. No one recognizes this more than Mike McNally ’18 and Sam Cox ’18, who have worked as the managers for Bison men’s basketball for four and three years, respectively. Some of their daily responsibilities include attending practices and games, working on drills with the players and coaching staff, completing administrative duties, helping the training staff on the sideline with hurt players, keeping stats, and giving the players water and towels.

With the depth of their responsibility on the sideline, McNally and Cox have become engrained in the team culture along the way.

“I have always been part of a team all throughout my own athletic days, so just that feeling to be a part of something is great,” Cox said.

McNally echoed this statement, reflecting on his own time with the team, expressing his excitement to be back in the athletic environment for this upcoming season. McNally, who was on campus for the Patriot League Tournament last year, was able to be an integral part of that experience.

“Last year, when we made the tournament and won at home against Lehigh, it was such an awesome environment,” McNally said. “It truly was even more fun to rush the court and cut down the nets. I’m really excited to be back in that setting.”

This excitement for the program as a whole is definitely something both managers share. Cox, who was abroad during the tournament run for the Bison last spring, said, “I’m most excited to see how we do in our conference and how far we can go this year,” Cox said.

He continued, “I’d say this is the best team I have seen at Bucknell, and if our scrimmages against UNC and Maryland are indicators for what is to come, then I am excited to see another tournament appearance.”

Of course, being a manager on the team does come with a significant time commitment. Both managers reflected on the various practices and games that they have attended, home games they have worked at, and away trips they have attended with the team. It is their dedication off the court for the Bison that is crucial for these trips to run smoothly.

“My favorite part is traveling to cool away games and being behind the scenes,” McNally said. “The team has taken me to Villanova, Vanderbilt, Butler, Las Vegas, UNC and the NCAA Tournament last year, and it was awesome to be a part of it all.”

It’s always fun to be on the bench for televised games, especially because people tell me how they saw me on the bench giving out water to the team,” he said.

With dedicated and passionate managers such as Cox and McNally working behind the scenes for the Bison, the 2017-2018 campaign is certain to be one to watch.

Danielle Baer ’18 has served as women’s basketball manager for the Orange and Blue since her first year on campus. She played basketball growing up and developed a strong love for the game during high school, and came to college knowing that she wanted to stay involved with the sport that had captured her heart.

“When I got to campus I told myself that I’d wait at least two weeks to adjust to college life before jumping into anything, but after my first day of classes, I decided I had plenty of free time and I emailed the Director of Operations and inquired about a manager position without hesitation,” Baer said.

Baer’s duties as manager include setting up the gym for practices, as well as running the scoreboard, filming, and keeping team stats. On game days, she arrives at the gym about two hours before the game to prepare. While on the bench during contests, she keeps a shot chart.

“When we travel, I pack two bags with anything we could possibly need and load the bags, snacks, and drinks onto the bus. I make it my job to make everyone else’s lives easier,” Baer said. “Some of the strangest tasks I’ve done include making coaches sandwiches during late-night practices or cutting all of the confetti we used after we won the championship by hand.”

Last year, she was recognized as one of three finalists for the Managers on a Mission Women’s Basketball Manager of the Year award, which recognizes exceptional managers who go above and beyond their outlined job. Baer’s profile highlights how much the Bison Women’s Basketball program appreciates her hard work: “There is not a member of the program that doesn’t openly gush about Danielle’s work ethic or praise her regularly for how she continually makes their life easier.”

Baer reflected on the personal connections that she’s made with players and the athletics staff throughout her four years.

“The players and staff make me laugh every single day. I love how we can work hard in practice and have fun doing it. Being a manager allows me to study the game I love while building lifelong friendships,” Baer said.

These friendships were strengthened even more when the team won the Patriot League Championship last season. After experiencing the game from the sideline, Baer celebrated on the court with teammates and coaches and recounts that day as her favorite memory from her time in the managerial position.

“It was such a rewarding feeling knowing that the team’s hard work finally paid off. I will never forget the special moments we all shared that day following the win,” Baer said.

Baer hopes to experience the feeling of winning another Patriot League title this season, her final season as manager.