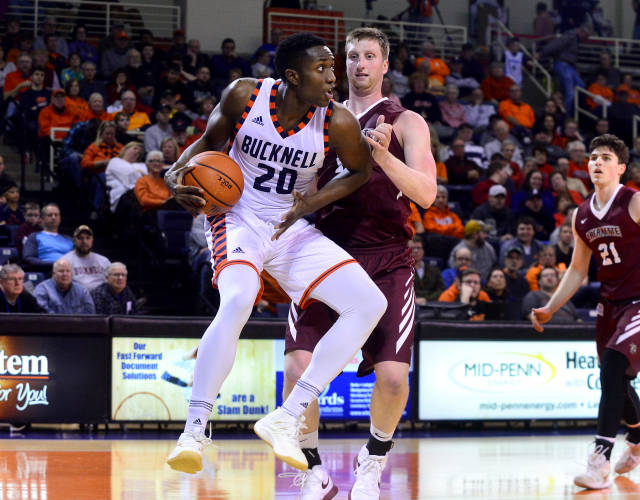 The Bison defeated the Lafayette Leopards 74-59 for their tenth straight win on Feb. 3 at Sojka Pavilion. However, the winning streak was broken in an overtime thriller on Feb. 5 at Lehigh.

Against Lafayette, Zach Thomas ’18 led all scorers with 20 points, to go along with seven rebounds and two blocked shots. Stephen Brown ’18 continued his efficient play with 14 points, six assists, and four rebounds.

Although the Orange and Blue consistently found holes in the Leopard’s defense, Lafayette managed to stick around in the first half, cutting an eight-point Bison lead to just one. The Bison, notorious for dominating teams early and often, found themselves entering halftime up five points in a closely contested match-up.

The Orange and Blue came out strong in the second half and gained momentum. Thomas, Bruce Moore ’20, and Kimbal Mackenzie ’19 each hit a three-pointer on the first three possessions of the second half, but the Bison then went cold, going five minutes without a field goal. The Leopards took advantage of the cold spell and went on a quick 11-0 run.

That seemed to ignite a fire under the Bison offense. Avi Toomer ’20 hit a three that eventually sparked a quick 11-0 run for the Orange and Blue, which led to a 19-point lead with 4:22 left in the contest. Many bench players saw minutes at the end of the contest, and Jordan Sechan ’21 recorded his first field goal as a Bison.

While momentum continued to shift back and forth throughout the game, one thing was sure: the Bison’s lock-down defense. The Bison’s defense caused Lafayette to turn the ball over 17 times, which allowed the Bison to capitalize on 30 points off turnovers. The Orange and Blue finished the game with a plus-10 turnover margin, due in large part to the amount of care in handling the ball between the starting back court of Mackenzie and Brown, who combined for 11 assists and just one turnover.

“It’s one of our main jobs as guards to keep everyone involved and take care of the ball,” Mackenzie said. “When everyone on the team is aggressive, making plays, and scoring, we are a tough team to beat.”

In the following Patriot League match-up on Feb. 5, Lehigh managed to come away with an overtime win to snap the Bison’s winning streak. Despite the loss, Thomas had an outstanding performance with 36 points and 13 rebounds, while Nana Foulland ’18 had a double-double with 14 points and 13 boards. Mackenzie also added 18 points.

The Orange and Blue saw themselves down nine points early in the contest, but continuously chipped away at the Mountain Hawks to take a two-point lead into halftime. Brown provided his own 7-0 run in the final minutes of the first half to spark the rally.

The second half was a back-and-forth battle. Thomas managed to initiate a 10-0 run when he hit a three from the corner, while Brown gashed the defense and attacked the rim for a score. The Bison were up by one point with 35 seconds to go. The Mountain Hawks were fouled and converted one of two free throws, sending the game to overtime. From there, Lehigh took advantage of Toomer and Moore, two of the Bison’s best defenders, having fouled out, winning the game 92-89.

The Bison have a full week to make adjustments before they face Colgate at home on Feb. 12.