On Feb. 18, Tarana Burke, activist and founder of the #MeToo movement, spoke at the Weis Center for Performing Arts. 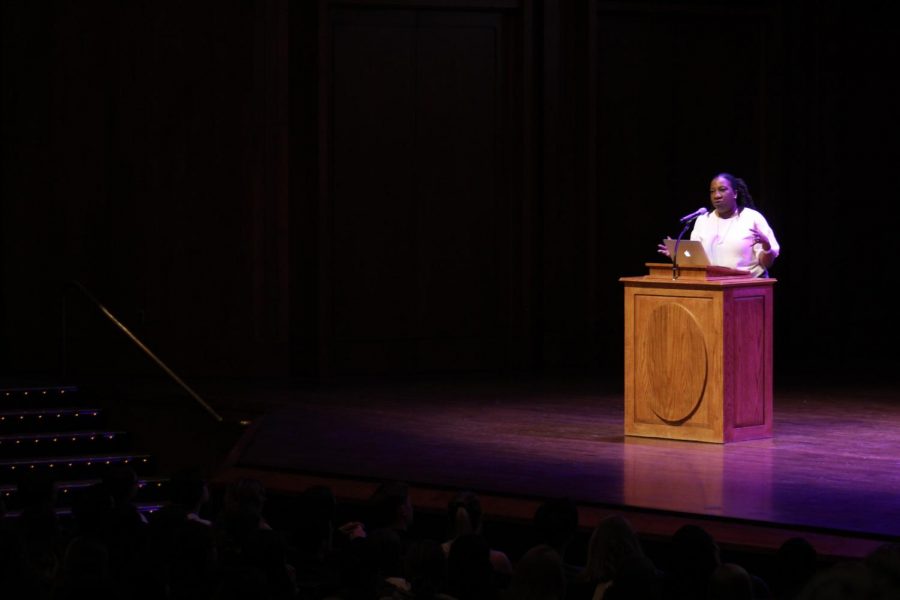 Burke, the Senior Director at Brooklyn-based Girls for Gender Equity, first began using the phrase “me too” in 2006. These words, she explained, are a means for survivors of sexual violence to find one another. “People don’t need sympathy, we need empathy. That connection when I say ‘I understand because that happened to me too’, even just for a minute, is so powerful. This movement is about an exchange of empathy between survivors,” Burke said.

The movement began gaining popularity on Oct. 15 of last year when singer and actress Alyssa Milano tweeted, “If you’ve been sexually harassed or assaulted write ‘me too’ as a reply to this tweet.” Upon realizing the use of her phrase via Milano was reaching the thousands, Burke said she felt “panicked.” She went on to say, “I have seen the long history of black women’s work being erased,” Burke said. Therefore, Burke decided to “pull out the receipts” and posted a video of herself using the phrase ‘me too’ from 2014. Milano has since credited Burke with the phrase.

Burke was named one of the “Silence Breakers,” Time Magazine’s Person of the Year of 2017, for her work in ending sexual violence and harassment. Other silence breakers included Milano, Rose McGowan, Terry Crews, Taylor Swift and numerous other individuals. Upon introducing Burke on Sunday night, the University’s Interpersonal Violence Prevention Coordinator, Rachel Stewart, said, “the simple yet courageous ‘me too’ hashtag campaign has arisen as a rallying cry for survivors everywhere.”

However, as the #MeToo movement has gained recognition, largely on the part of the so-called “takedowns” of rich and famous men such as Harvey Weinstein, Kevin Spacey, and Matt Lauer, Burke says the movement is not focused on these sort of outcomes. Instead, she says, the movement is “committed to making it safe for people to speak their truth. This movement is really predicated to what survivors need and keeping the most marginalized among us at the center – particularly survivors of color and queer and transgender people.”

The event was sponsored by Speak UP Bucknell, as well as Residential Education, the Griot Institute for Africana Studies, Inter Residence Hall Association, Her Campus Bucknell, The Association for Computing Machinery – Women’s Chapter, the Dean of Students Office, the Provost’s Office, Diversity, Equity & Inclusion, Multicultural Student Services, LGBTQ Resources, the Women’s Resource Center, the Bucknell Undergraduate Executive Internship Program, Women in Finance, Do Random Acts of Kindness, Center for the Study of Race, Ethnicity & Gender, the Department of Women’s & Gender Studies, the Panhellenic Council, the Interfraternity Council, and many of the University’s Greek organizations.

“I think Tarana Burke’s talk was incredibly important for the University. She eloquently explained not only the Me Too movement but also the main misconceptions of feminism in a real and down-to-earth way that everyone can relate to. It was, in my opinion, probably one of the most important events that has ever happened on this campus,” Speak UP Peer Harper Stewart ’19 said.

Burke also discussed the importance of ensuring safety and healing through community vigilance to establish fair and effective laws and policies.

“Community healing is something we define together. College campuses are communities, this is where you live and you deserve safety and protection because you are here in a community with other people,” Burke said. She also stated that students must “demand safety” as to ensure that the University is accountable for all students. Additionally, Burke praised the University’s efforts for safety, calling Speak UP’s Sex Week “very progressive.” Yet, Burke said, “students have to constantly interrogate what the culture is on campus. You have to watch your culture and make sure it does not give way to violence, no matter how good your school’s services are.”

“Sexual assault and sexual violence, as Tarana Burke said, is not occurring just in the work place but all over college campuses as well. We as a student body need to be cognizant of situations that may foster potentially harmful situations,” Collin McArdle ’19, president of Tau Kappa Epsilon fraternity said.

Burke said she is constantly asked “what’s next for #MeToo?” Yet, she said, “We have only scratched the surface.” To continue the progress in the prevention of sexual violence and providing a safe place for the healing of survivors, Burke said, “I am only one person, so I need everyone else’s help moving this message along. It is scary and it takes courage, but I know you all have courage.”

In concluding her talk, Burke made a proposition to the crowd, saying, “I am asking you to join me. Let’s heal together. Let’s heal our communities together. If you are really here to do that I can only leave you with these two words: me too.”