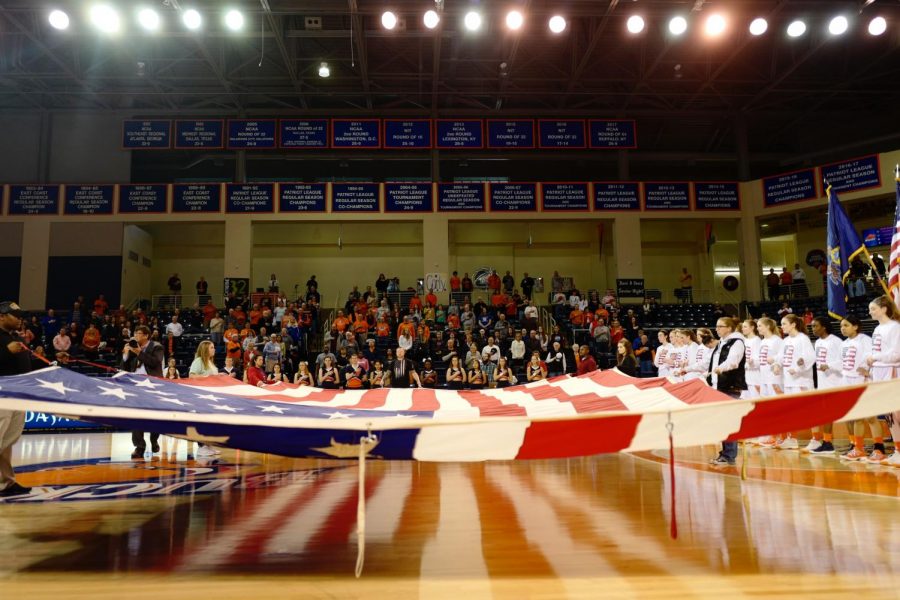 The Bison women’s basketball team came out on top 57-52 against first-place American on Feb. 24. With the roar of the crowd on its side, the Orange and Blue were able to win their 10th straight game and end American’s perfect 16-0 undefeated record in the Patriot League. Kaitlyn Slagus ’19 led the way for the Orange and Blue with her 23rd career double-double, tallying 12 points and a career-high 17 rebounds. With that win under their belt, the Bison hit the 20-win plateau for the sixth time in program history and will enter the Patriot League Tournament seeded second.

“Going into the game, we knew it was going to be a battle all the way through. It was back and forth the whole game, but luckily we were able to pull out the win, and carry our momentum into the postseason,” Ellie Mack ’20 said.

Kyi English ’19 was another main contributor against the Eagles, finishing with 18 points. In the beginning of the fourth quarter, English came up big for the Bison, executing a pivotal four-point play that resulted in a 42-38 lead for the Orange and Blue.

Later in the fourth quarter, Kate Walker ’19 lobbed a cross-court pass out of a trap to Mack, who shot a three-pointer in order to put the Bison up 55-52 with 25 seconds remaining. Mack finished with 11 points off the bench.

“Hitting that three made all the hard work I’ve put in this season on my shot worth it. Those are the big moments that you look forward to as a basketball player, and thankfully I was able to make it,” Mack said.

The difference-maker in the contest was finishing at the free throw line. The Bison finished 19-for-24 while the Eagles finished only 10-for-20 from the charity stripe. English contributed four points from the free throw, Slagus made six, and Walker tallied five. On defense, Walker led the Bison in steals with two and Autumn Ceppi ’21 led the way with two blocks.

In her Senior Day game, Catherine Romaine ’18 finished with 11 rebounds, leading the Orange and Blue to a 46-40 rebounding advantage. Carly Richardson ’18 and team manager Danielle Baer ’18 were also honored in a ceremony before the contest.

The Bison took on Army on Feb. 28 and closed their regular season schedule with a 75-55 win. Slagus led the Orange and Blue to the victory with a career-high 25 points, reaching the illustrious 1,000 point milestone for her career. The win brings the Bison’s overall record to 21-9 and 15-3 in conference play. They will carry an 11-game winning streak into the Patriot League Quarterfinals against either Colgate or Holy Cross on March 5 in Sojka Pavilion.