The Piazza family speaks on the tragic consequences of hazing

Jim and Evelyn Piazza, parents of Timothy Piazza, the victim of a tragic hazing accident at Pennsylvania State University, spoke on March 29 at the Weis Center 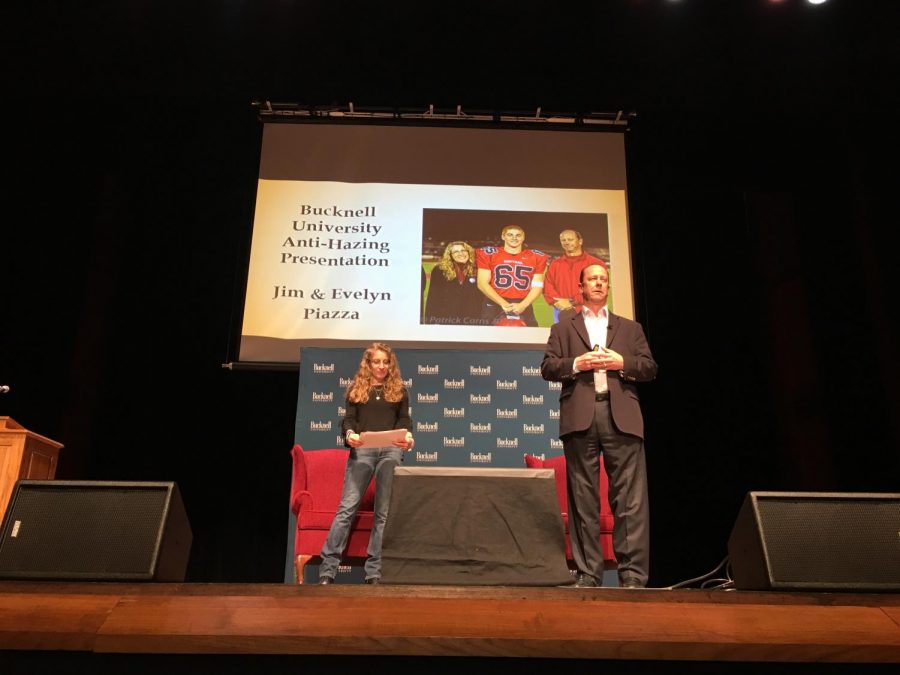 Parents Jim and Evelyn Piazza spoke to the University community on March 29 on behalf of their son Timothy Piazza, who was the victim of a tragic hazing incident that occurred at Pennsylvania State University in February 2017. They shared with students and staff their story with the intention of contextualizing the perils of hazing, in order to prevent future tragedies.

In order to address problems of hazing in the state of Pennsylvania, the Piazza’s have worked to push their anti-hazing efforts into legislative order. On March 27, the Pennsylvania Senate Judiciary Committee unanimously approved “The Timothy J. Piazza Anti-Hazing Law.” The Piazza family hopes that their actions in influencing legislation will make a difference in college fraternity life and illuminate the ritualized yet highly overlooked practice of hazing.

“If there’s one thing I want you all to take home from this talk and spread throughout the community, it’s the importance of making the 911 call if you see someone in your environment who appears unconscious or is in bad shape.” Jim Piazza said.

The event was organized by Abby Joseph ’19 and sponsored by Alpha Delta Pi.

“Alpha Delta Pi saw the value in bringing Jim and Evelyn to campus because the University is a community that is not immune to high risk behaviors, and we knew how everyone on campus could benefit from hearing a story like theirs. We have been planning since October and the final product was more than I thought it could ever be,” Joseph said. The University’s Weis Center for Performing Arts sold 800 tickets in the first hour of sales and by the start of the event, all 1,200 tickets were sold.

“I think this really shows how students on this campus see the tragedies occurring on campuses around the country and want to learn how they can do something about them. I really believe everyone in the audience was listening with open ears and open hearts, and the amount of tears that were shed from the audience show that the Piazzas made an impact on those present,” Joseph said.

Joseph later highlighted a notable moment before the event.

“One thing that I thought was so important happened right before we went on stage. We were all in the Green Room waiting, and people were thanking Jim and Evelyn for coming to Bucknell, saying how they did not have to do this, but that we were grateful that they were. They responded that they needed to go through with this speech because it is not fair for them to put this burden on the next set of parents. Their response was so simple yet so touching, and I haven’t been able to forget that since the event,” Joseph said.

Alex Lord ’18 thought the message of the talk addressed many problems present on college campuses. “Students, especially those involved in Greek life, need to be aware of the risks and dangers that come with the activities that they partake in. Change comes with action, and the action begins with students,” said Lord.

Conner Edwards ’19 said, “Although it was clear the Piazza’s were not experienced presenters, the raw emotion they projected conveyed their message more clearly than any similar presentation I’ve ever seen.”