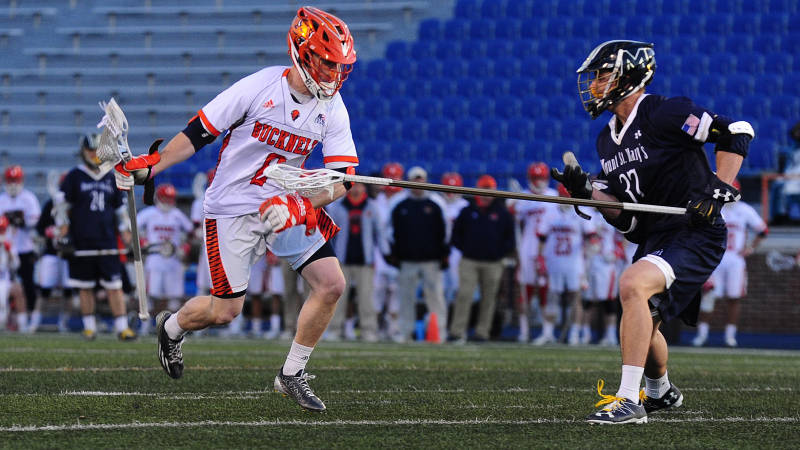 The Bison men’s lacrosse team (9-3, 5-1 Patriot League) tallied its fourth straight win on April 6 by a score of 14-9 in a non-league clash against Mount St. Mary’s. After defeating three top-25 ranked teams in the last four games, the Bison are now ranked 11th in the country.

The Orange and Blue proved their rank, coming out on fire in the first half. By the end of the first two periods, the Bison were up 9-0. The Mount did not score their first goal until 12 minutes remained on the clock in the third quarter. In the end, the Bison’s huge lead proved to be too much for a comeback from Mount St. Mary’s.

The Bison’s high-powered offense was fueled by Sean O’Brien ’18. After scoring the game-winner against No. 3 Yale earlier in the week, O’Brien provided another stellar performance, tallying six goals and one assist against Mount St. Mary’s. In just two games this week, O’Brien totaled ten goals and two assists. With 33 goals in the season, he is now tied with Connor O’Hara ’18 for the Bison’s leading scorer.

“I think it is just a credit to my teammates for putting me in great spots…we are playing with confidence and speed and clicking at the right time,” O’Brien said.

Fellow Bison attackmen also had a superb day. Tommy Sopko ’21 finished with a hat-trick. O’Hara had one goal and two assists, while Will Sands ’18 continued his historic season by contributing four assists. With 43 assists this season, Sands is only five shy of the Bison single-season record.

On the other side of the ball, the Bison defense played lights out, forcing Mount St. Mary’s to 19 turnovers. Benny Borgognone ’18 led the team with six caused turnovers and added four ground balls to his defensive effort. Goalie Christian Klipstein ’19 finished with eight saves total.

Now in a three-way tie with Navy and Loyola for first place in the League, the Bison will next meet Lafayette at home on April 13 at 7:30 p.m. The team is ready to fight until the end for the regular season championship and the right to host the Patriot League playoff tournament.

“Getting a win at the Division I level is very difficult these days because anybody can beat anybody. Lafayette will be a great test and we are looking forward to the opportunity,” O’Brien said.