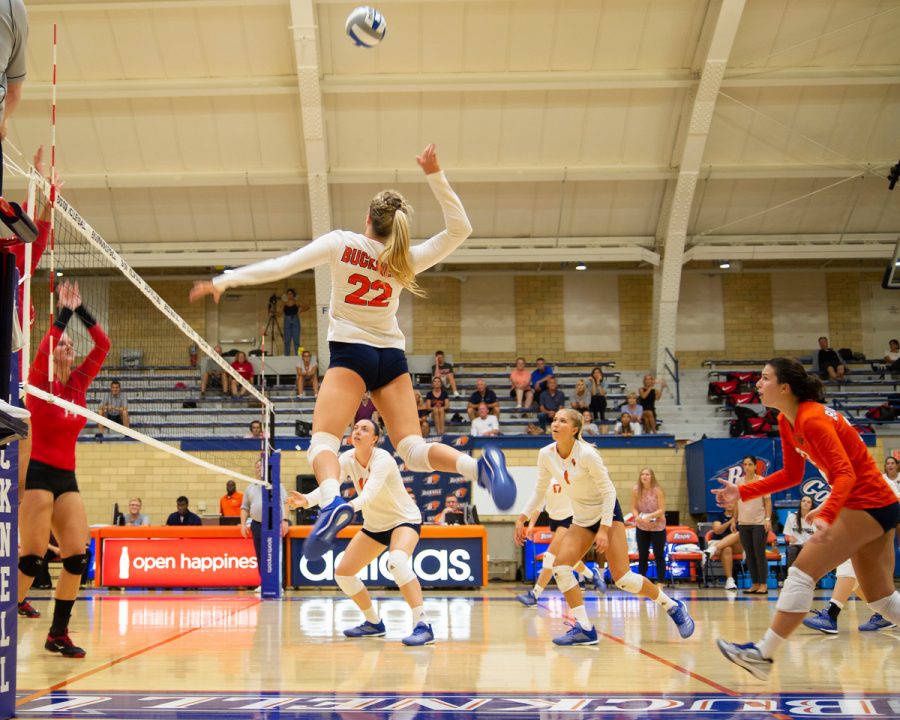 The Bison volleyball team had a successful first weekend, finishing 2-1 at the Bucknell Invitational on Aug. 24-25.

Mimi Richards ’20 was named the first Bison Athlete of the Week of the 2018 fall season. She averaged 9.7 kills and 7.3 blocks across the weekend’s three matches. Richards and Alexa Bonanno ’21 were also named to the All-Tournament Team.

“Being the first Bison athlete of the week was amazing,” Richards said. “[It’s] definitely a fun way to start off the season.”

The Orange and Blue opened the weekend with a 3-0 win over NJIT on Aug. 24. Blake Buchholz ’19 had a successful season opener with nine kills and a .389 hitting percentage. Many players recorded kills for the Bison, including Sophie Bullard ’20 with nine, Bridgette Holland ’20 with seven, Richards with six, and Vittoria Sottani ’22 with five in her first career match.

“We pursued every ball, extended rallies, and found ways to score in order to win the match,” Buchholz said. “We have set our goals high for this season and I think that this past weekend proves that we are capable of playing volleyball at a high level.”

During day two of the tournament, the Bison recorded a 3-1 win over St. Peter’s but fell 3-1 to Youngstown State. Bullard recorded 21 kills and 19 digs against St. Peter’s, while teammate Bonanno tallied a career-high 48 assists. Bonanno also contributed 12 digs and three block assists. Sottani served the final seven points of the match, which included two aces. Brooke Stark ’20 had a match-high 27 digs. Richards had seven blocks and 13 kills and Buchholz had 12 kills.

Although the Orange and Blue put up a strong effort, including a double-double from Richards with 10 kills and 10 blocks, Youngstown State was able to record a 3-1 win. Bonanno also contributed a double-double with 35 assists and 10 digs. Holland registered 10 kills, five of which were in the first set with no errors.

“Our motto for BUVB is ‘as one’ and I think we were successful at playing like a family,” Richards said. “We know what we need to work on, and we are ready to put in the work to have a successful season.”

The Bison will play at the Terrier Invitational on Aug. 31 and Sept. 1, hosted by St. Francis and will face off against Delaware State, Cal State Fullerton, and NJIT.