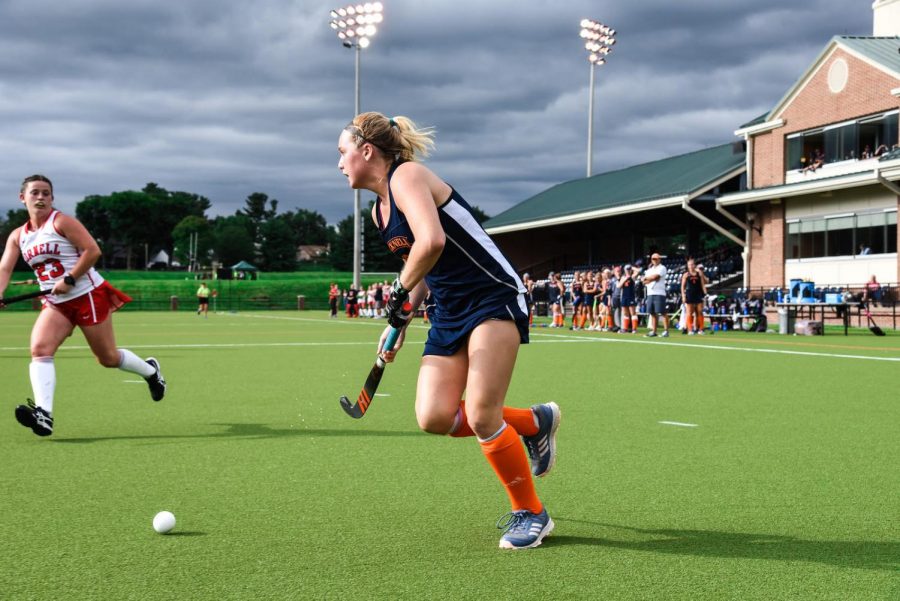 The Bison field hockey team came out strong during their home opener this past weekend as they defeated Cornell, 5-0, on Aug. 31. The Bison then went on to clinch another victory on Sept. 2, overcoming Richmond 2-1 in a double overtime contest.

In their first game of the weekend, the Bison stepped onto the newly renovated Graham Field to face the Cornell Big Red. Chloe Poltonavage ’20 put the Bison on the board first, scoring off at penalty corner at the 15:35 minute mark.  Lexi Quick ’19, Leah Fogelsanger ’21, and Katie Mannino ’19 each scored a goal to give the Bison a 4-0 lead going into the second half.

“Converting on so many corners proved to be incredibly valuable for our momentum in the game,” Mannino said. “We really came together as a unit and proved our resiliency.”

The Bison were relentless on the field and put pressure on Cornell from beginning to end. In the second half, Brittany Willwerth ’20 tacked on the final goal to cap off a strong team win.

After making seven saves, six of which came in a span of two minutes, goalie Olivia Harris ’20 collected her first career shutout and first career win with the Bison. Sally Olson ’19 also helped preserve the shutout with a defensive save off a corner.

The Bison prevailed yet again on Sept. 2 in a tight game against Richmond, coached by Jamie Montgomery, a former assistant coach to the Bison. The Spiders took the lead after a scoreless first half with a goal. However, the Bison were quick to counter as Mannino scored an overhead goal to even the score 1-1 10 minutes later.

Regulation time was not enough to decide a winner. The Orange and Blue battled through the first overtime period and into the second until Quick scored the game-winning goal with 2:51 minutes left to give the Bison the dramatic 2-1 win.

Harris had another strong performance and deflected four of the five shots fired at her goal. The team finished the game with an 11-8 advantage in shots and a 3-1 advantage in corners.

“After last weekend, we really focused on defensive organization, which played a key role in our overtime win over Richmond,” Olson said. “Getting a win like this under our belts this soon into the season gives us confidence going into preparation for Patriot League play.”

The Bison will be back in action on Sept. 7 at 4 p.m. as they host Lock Haven at Graham Field.