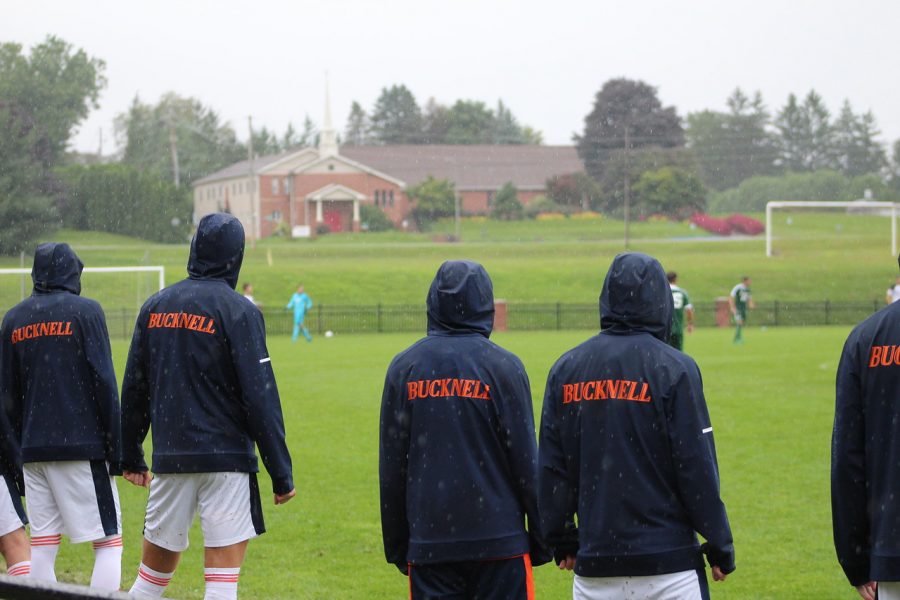 The men’s soccer team opened its home campaign with a 0-0 tie against Canisius on Sept. 7 and a 1-0 double overtime loss to Stetson on Sept. 9.

Coming off a frustrating loss to Saint Francis the previous week, the Bison were hungry to prove themselves as they opened their home campaign. Unfortunately, despite creating many opportunities, the Bison were unable to put the ball in the back of the net against Canisius.

The Orange and Blue defense, anchored by center back Tyler Peterson ’19, persisted to maintain a clean sheet. Goalkeeper Ryan Ott ’19 came up with numerous saves throughout the game. He finished the game with six, including a critical save in the 55th minute.

From the beginning of the match, the Bison proved their resiliency, generating chance after chance and nearly scoring on multiple occasions. With 20 seconds remaining in the first overtime, Kevin Gulizio ’21 sent a shot flying just shy of the goalpost. The Bison had another near miss on a point blank header by Peterson with eight minutes remaining in the second overtime, but the Canisius back line would not break.

In their second match of the weekend on Sept. 9, the Bison failed to find the back of the net yet again. Despite creating scoring opportunities, earning 11 corner kicks to Stetson’s five, the Bison again walked off the field scoreless after regulation. While the defense displayed another strong showing, the Hatters were able to break the deadlock and win the match off a deflected shot in the second overtime period.

Ott again came up with six saves. Unfortunately for the Bison, a Stetson shot deflected off a Bucknell defender and into the back of the net, ending the game in a Stetson victory.

“Defensively we saw a complete team effort with guys laying their bodies on the line to block shots,” Ott said. “As far as offensively, we were great in transition. We created a number of chances but struggled a little bit to finish them. As the season goes on, I’m completely confident that we’ll see more goals hitting the back of the net.”

The Orange and Blue will continue to focus and improve as they continue preparation for upcoming Patriot League play.

“Right now we have gone 350 minutes without a goal, however, as a staff we are more concerned with the lack of dangerous situations and decision making in the offensive third,” head coach Brendan Nash said. “This is something we will be addressing on the training ground.”

The Bison bounced back with a 2-1 win against Robert Morris late on Sept. 12, and will look to build  on that performance at home against Saint Peter’s on Sept. 15.