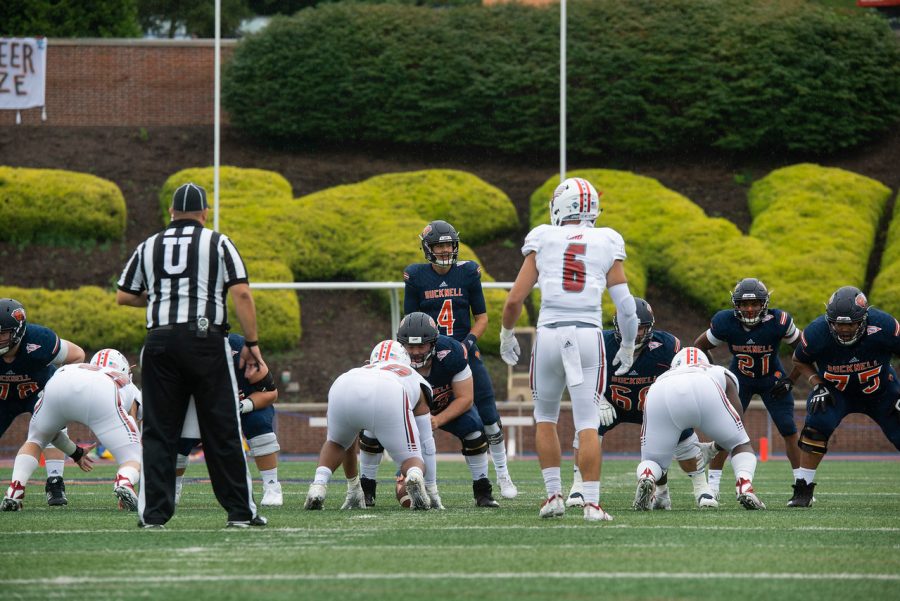 The football team squared off against Sacred Heart University at Christy Mathewson-Memorial Stadium on Sept. 8, falling by a score of 30-14.

Sept. 8 was also Hero Appreciation Day at the stadium, as the Orange and Blue paid tribute to military veterans, active duty servicemen and women, Gold Star Families and first responders throughout the game. These local heroes were involved in presenting a garrison flag during the national anthem and delivering the game ball to the referees; the Bison also recognized veterans who were wounded in combat at halftime through their partnership with the Wounded Warrior Project.

The first quarter of the game consisted of strong defense on both sides of the ball. Both teams combined for only five first downs and 91 offensive yards in the quarter. Sacred Heart displayed the one glimpse of offensive production of the period by scoring on their opening possession. The touchdown came on a 30-yard rush by running back Jordan Meachum.

Early in the second quarter, Bison receiver Brandon Sanders ’22 scored on a four yard touchdown run. The Bison took the lead less than two minutes later when Fisayo Oluleye ’19 stepped in front of a pass and returned it 54 yards to the end zone. The interception was Oluleye’s second of the season. However, this was as far as scoring went for the Bison. A touchdown pass for Sacred Heart with 10 seconds remaining before halftime tied the game at 14 apiece headed into the break.

The Pioneers outscored the Orange and Blue 16-0 in the second half to pull away with the victory. Running back Jared Cooper ’22 ran for 96 yards on 15 carries. Quarterback John Chiarolanzio ’20 finished with 100 yards going 17 for 35 while three different receivers gained at least 20 yards. Kick returner Stefone Moore-Green ’20 returned a kickoff for a career long 66 yards.

“This was a very physical team against a fast and athletic team in Sacred Heart,” head coach Joe Susan said. “We stayed in the game until midway through the fourth quarter.”

Not fazed by the team’s 0-2 start to the year, Susan sees a lot of room for improvement and instills in his players that the team needs to take it one game at a time.

“We approach each game as its own separate season,” Susan said. “This is a tribute to the student-athletes on our team and our coaches. We are on the road this week against the University of Pennsylvania and will work to do all we can to prepare to win.”

The team will face Penn on Sept. 15 at 3 p.m., the first of three consecutive away games.