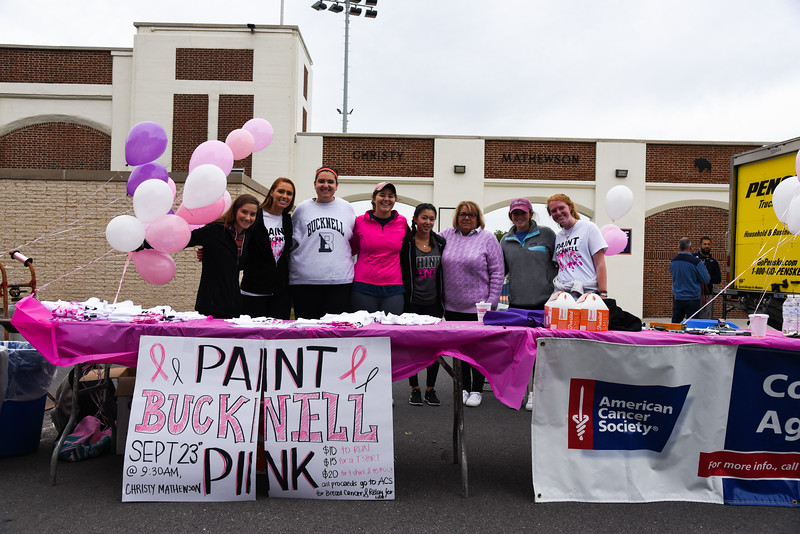 Colleges Against Cancer hosted its annual 5k on Sept. 23 to raise awareness and money for breast cancer research. This weekend’s event was the eighth annual run, and it consistently happens over Family Weekend.

The event continues to improve, according to Colleges Against Cancer member Lindsay Garfinkel ’19. “This is my fourth year working on Paint Bucknell Pink. Since being a freshman, each year the 5k gets better and better, supporting important cancer research. As a senior, it’s really gratifying to see all of the support, and how Colleges Against Cancer has grown,” Garfinkel said.

The event included a t-shirt sale for fundraising purposes, and a 5k trail that went around the University’s campus with bagels, coffee, and bananas at the finish line. “The planning of the event involved getting a lot of approvals from the school, the borough, Buffalo Valley Police, Public Safety and event management. It also included holding weekly meetings, tabling in the LC to register runners and sell shirts, and trying to promote the event with posters and social media,” Colleges Against Cancer President Marly Blajsa ’19 said.

Thanks to the dedication and work of the Colleges Against Cancer members, the event was seen to fruition. “This was my second year participating in Paint Bucknell Pink as a volunteer, and it was even more rewarding than last year,” event volunteer Leah Chrisbacher ’20 said. My favorite part of the event is seeing students getting their families involved in  a student organization. It’s a fun way to support a good cause, and a great way to end family weekend.”

While the event raised money for breast cancer research, it also raised awareness for other types of cancer, as different people have different reasons to join the fight. “Our family were caregivers to our daughter, Elizabeth, who was diagnosed with juvenile chronic myeloid leukemia in 1999 at two years old,” Colleges Against Cancer Staff Adviser Marguerite Santorine said. “She went through chemo, total body radiation, a bone marrow transplant, only to succumb to cancer in 2000, having just turned three years old. Our family’s motto is ‘there is no off-season in the fight against cancer.’ And, we continue to fight cancer from every angle so no parents or siblings have to hear that word: ‘Cancer.’ But, know that everyone who is in the fight against cancer fights for different reasons, as cancer is not just pink, but many colors. September is gold, #GoingGoldForChildhoodCancer.”

This year, the donation being made to the American Cancer Society is around $2,000. “Our goal was to raise around $1,000 and we actually were able to double that goal and had about 100 people in attendance (triple last years turnout),” Blajsa said. “I want to thank everyone who came and supported the event.”