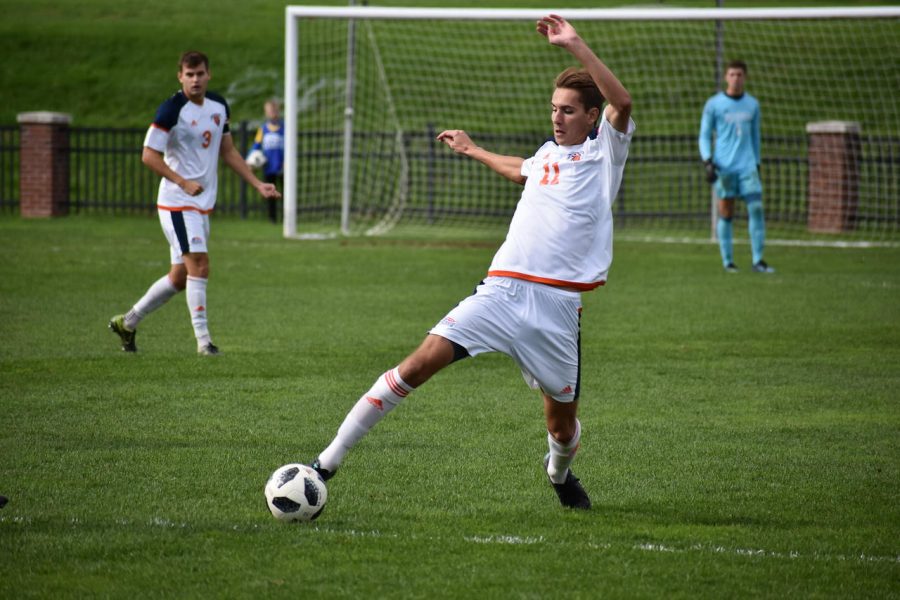 Colgate scored a pair of second half goals in a span of two minutes to hand the Bison men’s soccer team their first conference loss on Oct. 13. The Bison came out strong in the first half, but were not able to capitalize on their goal-scoring opportunities. The Orange and Blue remain tied for second place in conference play after dropping to 3-1-1 in the Patriot League.

Dictating the tempo of the game from the opening kickoff, the Bison were relentless in the first half, attacking the flanks and delivering shots into the box. This pressure on the Raiders earned the Bison seven first half corners, all of which were unsuccessful.

The Bison’s best chance of scoring came when midfielder Nick King ’20 strode towards the goal, looking to strike, when a Raider defender pulled him down just outside the box, an extremely controversial call. The Orange and Blue failed to score on the free kick, while Colgate remained at full strength since only a yellow card was awarded following the tackle. The first half ended in a scoreless tie.

The Bison continued to play with poise in the second half, with both teams battling back and forth as they searched for a goal. The Raiders found the game-winning goal in the 71st minute from a shot inside the box, and added another game-clinching goal shortly after when they found the bottom corner of the net.

“The intensity was good from the start of the match,” head coach Brendan Nash said. “We also did a very good job of team defending. Unfortunately the ball bounced their way and they put one away. From there we needed to spread out and try to play catch up.”

“The most positive takeaway is that for most of the game, we were able to outplay and outwork Colgate, the two-time defending conference champions,” King said. “While we lost the game, we know that we can play with this caliber of team and that with some minor fixes we can compete for the Patriot League Championship this year.”

The Bison look to rebound when they travel to face Army West Point on Oct. 20 at 7 p.m.