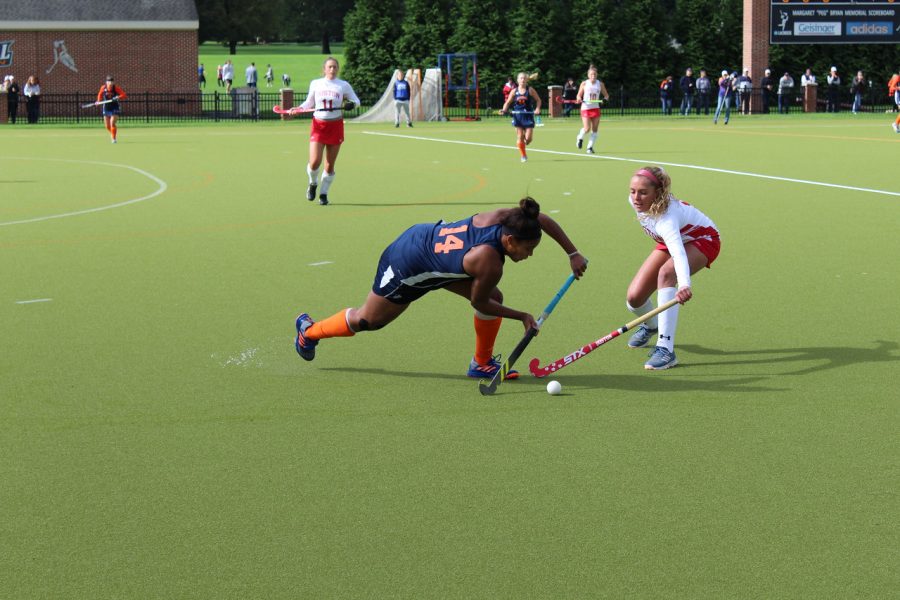 The Bison field hockey team faced conference rival No. 24 Boston University on Oct. 13. Fighting until the end, the Terriers were able to clinch a 3-2 win in double overtime, dropping the Orange and Blue’s record to 2-2 in Patriot League play and 7-6 overall.

The teams traded goals throughout regulation with Boston striking first, putting a goal in the net just three minutes after the opening whistle. The Bison tied the game 1-1 in the 15th minute. Emily Doyle ’22 quickly dribbled along the baseline, and sent a flat ball towards the goal which ultimately set up Claire Lesher ’19 for the rebound goal, her first of the season.

The Terriers quickly responded with a goal, taking a 2-1 lead. Looking to respond, the Bison fought within the midfield for a positive possession. In another Terrier opportunity, Sam Chanzit ’20 made a key defensive save on the goal line.

Bringing the Bison back into the game, Lexi Quick ’19 stepped up and scored a goal off a corner. She took the insert on a penalty corner from Lesher and fired it in for her sixth goal of the season.

Goalkeeper Olivia Harris ’20 made six saves throughout the game for the Orange and Blue, including three in the two overtime periods. Despite a tough back and forth battle in both overtime periods, Boston University edged them out in double overtime, claiming a 3-2 victory.

“This past weekend’s game was hard-fought, with some amazing defensive efforts such as Sam Chanzit’s awesome save on the goal line to keep us in the game,” Lesher said. “Unfortunately, we didn’t get the result we wanted, but in comparison to previous years, the way we played Boston in the regular season this year was certainly an improvement. The team is excited to have the opportunity to see them again in postseason play”.

The Bison will be back in action in another Patriot League matchup against the Holy Cross Crusaders on Oct. 20 at 11 a.m.