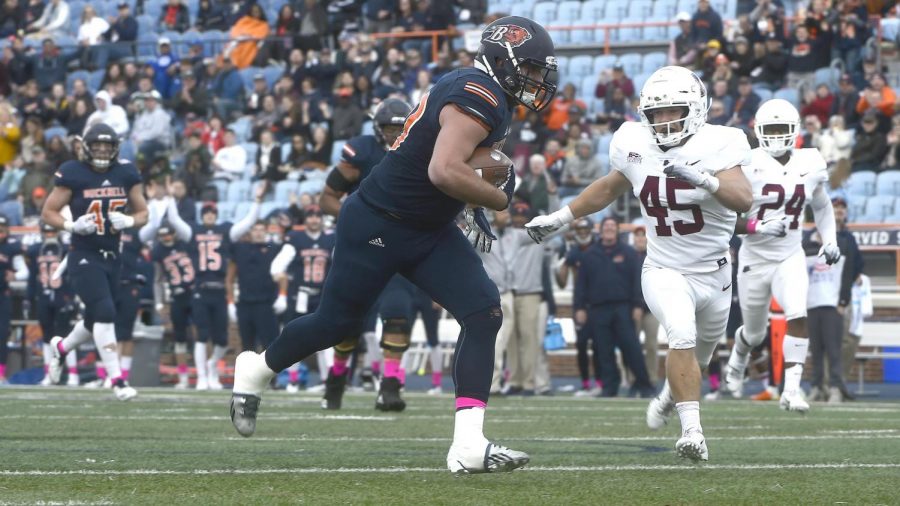 The Bison football team fell 29-27 to Lafayette in front of a crowd of nearly 3,000 people on Oct. 20 for Homecoming weekend. The Bison offense found success primarily through the air with 294 total passing yards, while the defense continued to prove their resilient nature.

A 14-yard pass from quarterback Logan Bitikofer ’21 to tight end and full back Andrew Owers ’19 provided the Bison with their first touchdown early in the game. The Leopards answered back on the next possession with a rushing touchdown to tie the game 7-7.

After a missed field goal by the Leopards, Bitikofer led his offense on a six-play, 76-yard drive for another Bison touchdown late in the second quarter. The drive was capped off by a 28-yard touchdown pass to a wide-open Owers, making him the first Bison to score multiple touchdowns in a game since the 2016 season.

Immediately following this drive, the Bison got the ball back as cornerback Fisayo Oluleye ’19 tipped a pass into the arms of safety Gerrit Van Itallie ’21. This set the Orange and Blue up in great field position at the Leopards’ 23. The Bison, however, were unable to capitalize and shortly turned the ball over on downs.

In the second half, Lafayette struck first on a 13-yard touchdown run, tying the game at 14. Shortly after, Sterling Deary ’22 stepped in front of a Leopard pass and returned it 41 yards to put the Bison back up 21-14. However, the Leopards were quick to answer back, scoring on a quarterback keeper, followed by a failed extra point attempt that kept the Bison up by 1, leading 21-20.

After forcing the Bison to a three and out, Lafayette tacked on another three points to give the Leopards an eight-point lead. The Bison, determined to stay in the game, answered back on a 40-yard touchdown pass from Bitikofer to wide receiver Justin Bethea ’20 with 4:25 left in the fourth quarter. Down 29-27, the Bison attempted to even the score on a two point conversion. They failed, and Bitikofer left the game with a leg injury suffered on the play.

The Bison got the ball back with just over three minutes left. Tarrin Earle ’22 took over as quarterback and started to put together what could have been a game-winning drive. However, the Bison’s plan was thwarted as Earle was sacked twice to end the game.

Defensively, Brandon Benson ’21 led the way for the game high with nine tackles. Mottram recorded a career-best three tackles for a loss in his first career start. Linebacker Sam Chitty ’20  had the team’s lone sack.

“We have been in two close games in a row, with the lead in the fourth quarter. The parity in our league results in close games. We have to do what it takes to win these games,” Head Coach Joe Susan said. “Protecting the lead and keeping a lead is critical to this. Our players played hard throughout the game.”

The Bison (1-7) won’t play this week, but resume Patriot league play on the road on Nov 3. against rival Lehigh.

“The bye week comes at a good time as we have a chance to get some of our injured players back for the final three games,” Susan said.